When the family-based social network FamilyLeaf first made its debut as part of the Y Combinator Spring 2012 class, the startup set itself up as a kind of anti-Facebook: a place where relatives could come together in a private network built with family networking in mind without some of the trappings like advertising and the wider sharing with your network of friends (and, as we’ve seen, friends of friends) that have put some people off the world’s biggest social network.

Fast-forward to 2013, and that concept is now evolving.

People who have opted out of the Facebook scene can still use FamilyLeaf, but for those who have not, the startup is getting ready to turn on a Facebook integration so users can tap their social graphs to help find family connections. The move is part of a bigger set of changes at FamilyLeaf, which — much like families themselves — is now growing up. On the back of a seed round from some well-placed investors (a seed round that the founders and investors do not want to discuss publicly just yet), FamilyLeaf has recruited several new advisors, added a new co-founder, and introduced some new features, including a new messaging service called Tidbits. 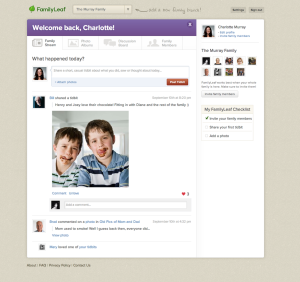 director of Product at Branchout; and Kartik Hosanagar, Wharton professor and angel investor in companies like Lovely — in part speak to how FamilyLeaf wants to pitch itself going forward.

Zillow’s strength has been in building a massive online real estate listings business that is, at its heart, a big data play; the neighborhood-based social network Nextdoor is a lesson in how to build a social network around a specific community. Branchout’s ability to navigate a Facebook integration for a social network that is aiming for something different than what Facebook can provide (something Lovely, too, has done with its Craigslist integration) is a paradigm that FamilyLeaf hopes to adopt as it looks to make it easier for its members to grow out their networks.

Meanwhile, the new co-founder, Henry Liu, was in the same YC class as FamilyLeaf’s original co-founders, Wesley Zhao and Ajay Mehta. At 17, he was one of the youngest ever to have come through the YC program, and some of that may have shown in his work there — he arrived with one idea and a recently-met co-founder, pivoted during the actual interview process, and still managed to get in. Perhaps unsurprisingly the pivoted idea never really stuck, but his programming skills clearly did. If Zhao and Mehta bring product and operational experience to the table, Liu brings the engineering talent, with his past experience including a stint at Hunch.

Liu’s influence in the last couple of months is already apparent.

One of the most eye-catching, and timely, is “Tidbits,” an SMS/email reminder service that lets you share casual updates with your FamilyLeaf network — yes, another light messaging app, similar to Snaphat and Facebook’s Poke app, “but rated G,” Zhao says, and also more permanent, in that the pictures remain in your account, rather than disappear as they do with Poke and Snapchat.

For now, users can upload Tidbits using emails or text messages, with the plan being to roll out a mobile app for the service later this year. The alerts for the service, meanwhile, come in the form of an email rather than constant updates on your phone. Like so much else with FamilyLeaf, that is intentional. “We didn’t want people to feel discouraged from uploading small details by spamming their families with notifications,” says Zhao. Conversely, the idea here is to create lots of small hooks, like sending short updates and pictures, to encourage people’s habitual use of the platform.

There will be more to come in this area, he notes, including the ability for people to video chat with each other in one-on-one or group situations, similar to Google+’s Hangouts.

Tidbits and the upcoming Facebook integration are part of a wider redesign of the site, says Zhao, made after the mad rush to have something finished for the original YC Demo Day. “Our original launch happened only 2 weeks after we built the product,” he says. “Now we’ve had a chance to listen to family members and clean it up.”

Other changes include a new home page design, video uploads, and the ability to customize email addresses for specific family branches. The last of these partly comes out of the fact that, Zhao says, one of the most popular uses so far has been in families with several adult siblings. Each of these will have their own families, but also a common family unit between them, so this feature should help with uploads in those situations.

FamilyLeaf has also made some significant improvements to its photo features, which, if Facebook is anything to go by, will be one of the most important ways that people interact with the site. Users can now integrate content from third-party sites like Flickr and Picasa, and FamilyLeaf has now included the ability to track who has viewed photos you’ve uploaded; users can also “love” pictures to show their appreciation. FamilyLeaf is also expanding tagging for the photos to make them easier to search.

But although it has a goal to make it easier for people to bring offline family connections into the online world, it has yet to integrate a way for people to print and send physical photos to each other.

There’s also another little change: FamilyLeaf has now picked up a pretty great Twitter handle: @Family, which was apparently just sitting there for the taking. Could this be a precursor to a wider rebranding? That would require a lot more money if FamilyLeaf was hoping to use Family.com — that’s a site owned and operated by Disney.