Put simply, BitPay feels like it is positioned to become the equivalent to PayPal for the virtual currency payment processor rival, Bitcoin.

I spoke with BitPay’s co-founder and CEO, Anthony Gallippi, and he explained to my why Bitcoin has a huge opportunity to go more mainstream in 2013: “We definitely think it’s the future. We wouldn’t be spending our time if we didn’t think that.”

What makes Bitcoin so interesting is that it flies in the face of payment models that we’re used to today; it’s a push model rather than a pull one. When you give a website your credit card and billing information to buy something, the company is pulling money out of your account. Giving up that personal information isn’t the safest thing, and Bitcoin allows you to “push” the money to a company to buy something. This means that no personally identifiable information goes with it, making eventual identity theft and fraud nearly impossible during the transaction.

Shakil Khan, known best for his involvement with Path and Spotify, tells me why he decided to invest his money in BitPay:

2013 will be the year for critical mass understanding of the importance of friction free international payments and I predict Bitcoin will become a global payment network. With very little resource, BitPay has already taken the place as market leader in the bitcoin payment processing ecosystem, and along with the other investors, I am very excited to help the founding team scale up and take it to the next level.

Based in London, Khan is also an investor in SecondMarket, Invi, BlackJet, Thread, and Summly.

Much like you’d find with companies and businesses using Stripe or PayPal, BitPay provides all of the back-end handling of payments, as well as “buy buttons” for the web. In November, BitPay had 1,300 businesses using their service, but after WordPress decided to adopt Bitcoin to pay for services globally, the company saw a dramatic rise to 2,100 merchants since then. For consumers, there is mobile integration to pay on the go, which will help Bitcoin pick up traction. 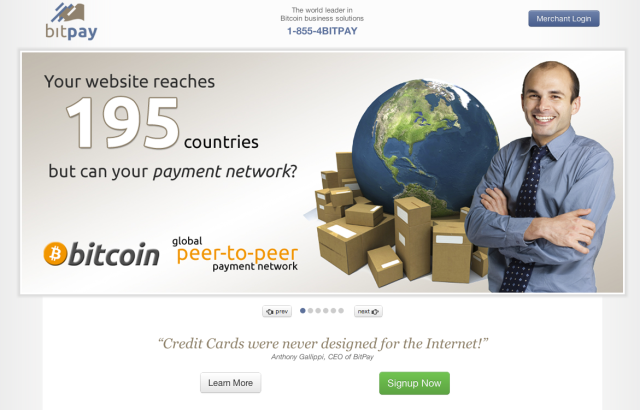 BitPay accepts Bitcoin and then puts “real” money into the bank accounts of businesses. Basically, there’s no worry on the end of merchants, because they end up getting paid the way that they’re used to. The difference is that a small business in Kansas City can now accept a payment from Indonesia for goods and services, which was nearly impossible before.

Until the $510K investment that the company announced today, Gallippi tells me that his small team has put in about $100K of its own money to prove out BitPay’s model. Clearly, it’s on to something. As far as what BitPay will do with the money, Gallippi says that it will immediately hire five people, mainly engineers, to help continue to develop the platform.

I asked Gallippi why he’s so sure that Bitcoin will take off as a payment alternative, and he had this to say:

We think that Bitcoin adoption will follow email, which started in corporate enterprise. With Bitcoin there won’t be a 10 year lag, but a lag, and businesses will lead the charge in Bitcoins.

One other interesting thing is that Gallippi explained to me that credit cards were never designed to be used on the Internet, which makes complete sense. Payment utilities are evolving (just look at Square), so it’s nice to see a company like BitPay step up and fight the good fight.

Those are fighting words. Sure, PayPal could start working on Bitcoin integration, but the company probably sees the opportunity as a low priority, thus giving BitPay the runway to surge forward and lead the space. There are others trying to grab the top spot, too, such as Y Combinator startup Coinbase.

One thing is clear: global payments are a massive opportunity for any business.