The site now ranks as the 11th-largest in terms of traffic, according to Quantcast. (That’s down slightly from November, when it broke into the top 10 with 170 million monthly visitors globally.) But with all that activity comes the inevitable question: What next?

Here’s a look at five areas where Tumblr has moved, and may move more toward, in the year ahead.

Advertising. Tumblr is very much one of the social media startups that was built for scale first, revenue later. And it’s been wildly successful with the former, bringing over 17.8 billion pageviews in December worldwide across its network of 80 million+ blogs.

But in 2012, the company got a little more serious on the latter point and introduced a new revenue stream based around ads – not straight display ads but “sponsor products” that promote Tumblr blogs based on brands or specific events.

Given that the company’s founder and CEO David Karp has made it clear he’s not a big fan of ads, it seems as if this were meant to counterbalance in-stream ads like Twitter’s Promoted Tweets or Facebook’s Sponsored Stories. (Update: a good Forbes profile of Karp, published after I posted this story, points out that the company had revenues of $13 million in 2012 and targets $100 million in sales in 2013, from the sales of these new ads.)

Tumblr places the sponsored products out of the stream on actual pages, only suggesting them at a time when users are searching for interesting content promoted through Tumblr’s Spotlight pages and its Radar of randomized, buzzy images.

An example Spotlight post is below, with a little dollar sign to signify that they’re not editorially selected or organically generated: 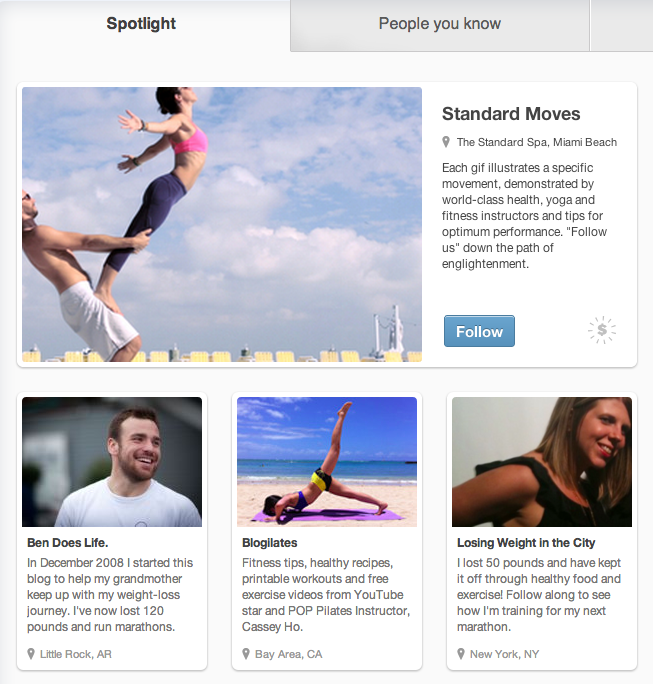 All fine and well, but earlier today, I got to wondering just how successful these ads are, or how much Tumblr is actually pushing them. Flicking through all of the Tumblr spotlights, I saw a total of six advertisers (seven if you count the two different ads for Standard Hotels). And these were by no means spread across all of Tumblr’s 50+ spotlight categories.

And through many, many refreshes on different pages, I actually never managed to catch a single Radar ad. In short, in-your-face ads these are not. It may be intentional to keep these numbers way down to maximize impact, but considering the amount of traffic Tumblr gets, it seems like even a few more wouldn’t compromise the experience that much. [Update: A Tumblr spokesperson says in regards to the lack of Radar ads that I “didn’t see any Radar units this a.m. because we are launching an internal inventory scheduling tool today. If you check out your dashboard tomorrow, you’ll see an ad from Texas Chainsaw Massacre 3D.”]

Target audience. Branch founder Josh Miller a few days ago published a post about how his teenage sister (10th-grade, Californian hipster, Facebook resister) responds to social media. It included an eye-opening view of how she and her friends saw Tumblr: an aspirational site for middle-school kids who are still gathering material for the collage that they believe defines them — the online equivalent of blue-tacking pictures to your bedroom walls.

That may be news to those of you older than 16 who post on and read others’ Tumblelogs. And indeed, it doesn’t seem to be the full story. Traffic data for Tumblr, again as measured by Quantcast, pegs 25-34 year-olds as Tumblr’s biggest audience, accounting for 29 percent of traffic. The second-biggest is 18-24 year-olds, with those under 18 at 13 percent. 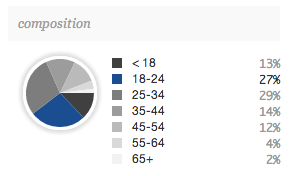 Be that as it may, there are two things here that come to mind.

The first is that hefty dose of NSFW content on Tumblr. It may not be the biggest proportion of users, but 13 percent of Tumblr’s daily audience of 5 .7 million daily visitors still works out to about 741,000 minors visiting the site daily. Apart from older users who simply find the adult content offensive, I wonder how the minor contingent of visitors juxtaposed with adult content sits with would-be advertisers (a juxtaposition we’ve pointed out before). But immoral or not, it could just be a storm in a teacup as far as monetizing is concerned: Union Metrics, which provides Tumblr analytics based on the site’s full firehose of data, claims that in fact the question of adult content doesn’t come up in conversations with advertisers.

Second, if Tumblr doesn’t figure out how better to show itself off and attract older users, the site might end up losing some of those users (and advertisers) to sites like Pinterest or Facebook instead. 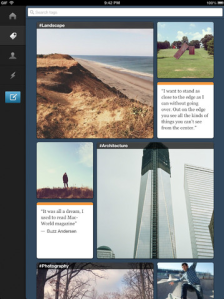 For a platform that prides itself on quick content bursts — just the kind of consumption you associate with users on mobile devices — Tumblr is getting a relatively small part of its overall traffic from mobile: 14 percent globally and 18 percent in the U.S. It’s similarly not tapping Android as well as it could. At the moment, only 32 percent of its mobile traffic comes from Android devices, with iOS accounting for 66 percent. Those new apps, and any more mobile developments Tumblr has planned, could not come a moment sooner to build on that.

Competitors. Tumblr has been described as a more fleet-footed version of WordPress, as well as others that are a part of the new wave of social networks, such as Pinterest. As you can see from the Alexa table below, it looks like Tumblr is very close to Pinterest in terms of traffic while trailing Facebook, Twitter, and WordPress. You can also see how sites like Tumblr and Pinterest are nipping at WordPress’s heels. 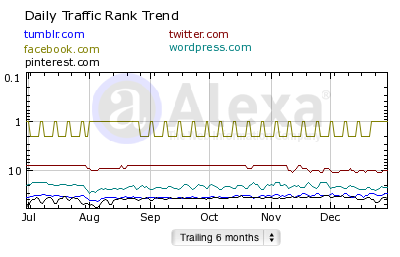 It’s tempting to think about how this might play out for Tumblr as a standalone company, or as one that becomes part of a bigger platform, in particular because it feels like it’s yet to really come into its own as a revenue-generating business.

For now, it seems like the price tag on the site continues to rise. In November, PE Hub reported that Tumblr was looking to raise another round of capital at a $1 billion valuation, although Tumblr denied the story. The last time Tumblr raised money from VCs was in September 2011 when it picked up $85 million from a consortium of VCs and Richard Branson. That was reportedly at an $800 million valuation. Tumblr has, to date, raised a total of $125 million in funding.

Transparency. Tumblr has been described as a social network rather than a blogging/WordPress-style competitor, but it marches to a different kind of social beat from the likes of Twitter and Facebook.

As you may already know, you can tap into Facebook and Twitter to find people on Tumblr to follow, but unlike these networks, you cannot see who follows different Tumblr blogs, or even how many followers a person has; and it’s up to Tumblr users to decide whether to reveal who they follow.

But you do get a more public sharing metric in the form of notes detailing who else reblogged or liked a particular post. This is one clear sign of how and where certain content goes viral, but, conversely, it is also a sign of how little mileage a lot of posts get. The long tail is long.

It will be interesting to see whether Tumblr tries to introduce more data on how users interact with each other on its network — and whether that data follows in the form of sites like Twitter and Facebook, or whether it can continue to grow without that extra detail. If the latter is successful, it also throws into question whether metrics like friend counts or follower numbers amount to much in the longer term.

And will Tumblr add more features to snare in more users? The core of Tumblr’s “social” experience is how people consume and share content based on their interests, rather than through a conversation with their social circles. This has been one of Tumblr’s most distinctive traits, but it also leaves a window open for features that the company might also try to introduce or encourage more in the future.

In the last year, visitors and visits to Tumblr were both up, but pageviews remained more or less the same (with fluctuations). I know that traffic can go up and down for any site, but that seems to point to less engagement. That’s something you might expect from a site with a lot of quick hits of content, but also a sign that if sites like Facebook and Twitter are focused on increasing engagement, then Tumblr has a shot at carving out a different kind of business path. And you know how much we all love a little disruption.