It’s been days, possibly even weeks, since we’ve covered a wedding-focused startup. Let’s change that, shall we? OneWed, the company formerly known as Nearlyweds, is now on iPad. The new app quietly arrived just before the holidays, offering a new way for brides-to-be to browse, be inspired by, save and share wedding imagery and ideas.

The iPad launch follows the revamp of the startup’s flagship website, OneWed.com, which this fall was redesigned to better emphasize its wedding photos. Previously, OneWed had operated a fairly traditional-looking media property, admits CEO John Scrofano. The company had recruited top wedding bloggers to produce original content for the site, paying bonuses based on how well that content did. 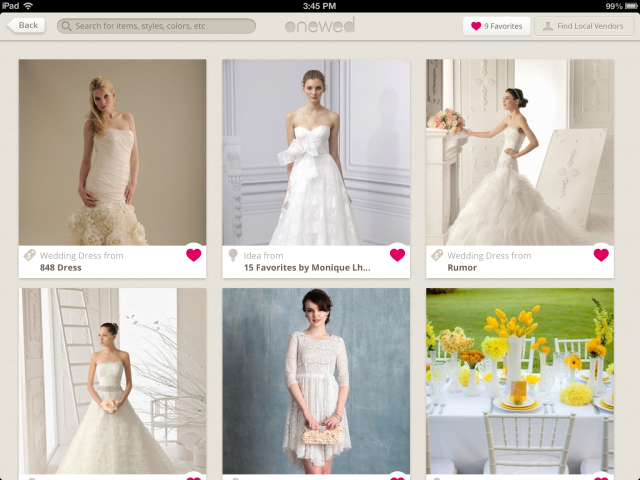 “We built [OneWed] on the back of this blogger model and the content we had produced…but what we were hearing our customers say is ‘we really love the pictures,'” Scrofano explains. “Bloggers were writing all these articles for us,” he laughs, “but really [users] just wanted the pictures.”

The company is no stranger to adjusting its offerings in response to user feedback, though. As Nearlyweds, it had once offered wedding websites and planning tools in the hopes of later connecting brides with wedding service providers. Describing this earlier incarnation of the site, Scrofano says although women liked the product, in general, “women are not super-excited about services in the wedding business. It was a very ‘dude’-way of looking at things,” he says. “What women really want is inspiration.”

With the OneWed.com revamp, it delivered that inspiration. Like a wedding-focused Pinterest, women can browse through images, products, articles, and other content, saving their favorites, posting to social services, and clicking through to the vendor’s own website. That last bit is important, actually. Pinterest is great for inspiration, but not great for taking action. And, as Scrofano reminds us, “weddings have deadlines.”

The company monetizes through featured listings – essentially paid ad placements – where vendors can advertise products from dresses to stationary accompanied by their own imagery. Due to the nature of OneWed’s content, it’s hard to tell which items are native ads, however. Scrofano says the ads are those items listed as “Products” on the site, but I would have never guessed that. But he says they’re still working to determine if that’s the best way to differentiate the paid listings from the rest of the items. (It’s not, but I’m not sure OneWed’s target demographic cares, either.) 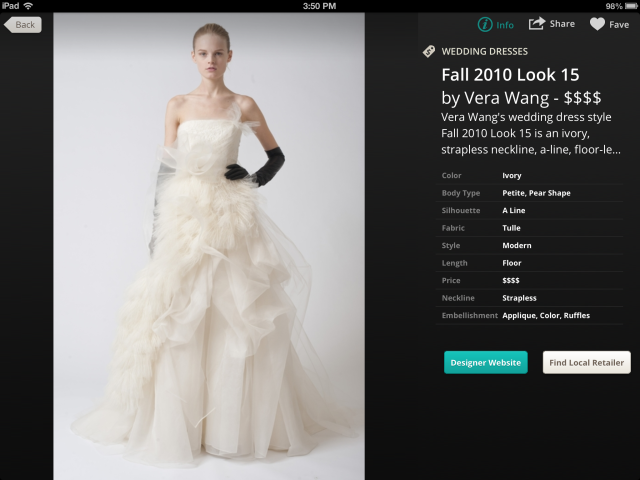 The model, so far, is working. The website now sees over half a million uniques per month, placing it around #8 in the wedding website industry, behind leaders like Martha Stewart Weddings or The Knot, for example. For comparison’s sake, TheKnot.com sees around 2.2 million uniques per month. OneWed is also doing over six figures in revenue and hopes to hit 7 figures “very, very soon.”

So far, the iPad app is doing well, too. Although it’s too early for download numbers or actives, since its debut last week, the app is already seeing 30 minute plus session times and multiple opens per day from most of its downloaders, as well as around 85 pageviews per session. As with the website, OneWed iPad users can also browse imagery, save and share their favorites, search by category, style, designer, color or other keywords, and buy the items in the photos.

OneWed had previously raised around $500,000 from Founder’s C0-op and other angels, and is planning to raise again. And while newness is generally what attracts investors, in the case of wedding startups, the fact that OneWed still exists after several years is actually a point in its favor. “We have 100 percent customer turnover every 18 months. Unless you have a brand that’s able to carry on, it’s so difficult,” says Scrofano. “It’s so hard to get a critical mass of brides. There’s a lot of dead bodies by the side of that road.”

You can download the new OneWed iPad application here.