Inky, a new email software company, has accidentally found itself in the spotlight this week after hiding in plain sight for over half a year. The company is aiming to offer a better email experience on the desktop, and later on mobile and web, by providing an alternative email client that works with webmail providers like Gmail, Yahoo, Hotmail/Outlook.com, Apple iCloud email, or any POP or IMAP account, while also providing a feature set that targets today’s email pain points.

The company had not sought press, but a random post on Hacker News started to create some buzz for the startup, whose app was first available for download this May.

For those unfamiliar, Inky’s client software application isn’t just a nicer-looking email desktop experience. It’s also working to deliver practical innovations that will make email more usable, such as its inbox sorted by relevance; automatically created “smart views” that handle organizing everything from personal emails to daily deals to newsletters; and much more. 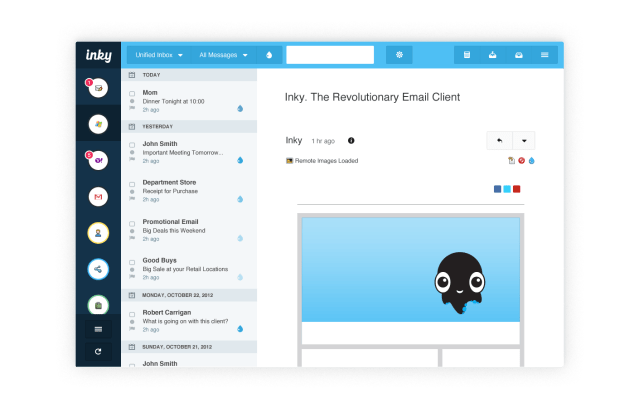 “It takes a crazy, rich guy to actually fix email,” laughs Dave Baggett, co-founder of Arcode, makers of Inky. “Big companies have all these corporate antibodies against innovation, and little startups – it’s a really challenging problem for a startup. It’s borderline not doable by startups. There’s so much basic stuff to get right.”

That’s true. Our hopes for an email savior have been dashed time and again, as email innovators either fold or exit via acquisitions – as was the case most recently with Sparrow, one of the few to really attract a serious following outside of webmail providers like Google, Yahoo, Microsoft, AOL and others. But Inky creator Baggett says he’s up to taking on the rather hefty task of fixing email. Baggett was the first employee at Naughty Dog, the game company behind the Crash Bandicoot games, and was the third co-founder at ITA Software, the travel software company acquired by Google for $700 million in 2010.

That latter experience, Baggett explains, is especially applicable to building a better email client. “The goal [at ITA] was to fix travel – travel search, in particular. Back in the day, you would call up a travel agent and they would type stuff into an ASCII terminal and it was really slow. We wanted to make a new platform for doing that better. We spent about five years working on that search product,” he says, “and there are a lot of parallels with email. There’s a lot of investment you have to make into the platform – especially if you’re doing it from scratch like we are, or like we did at ITA – which the users don’t see.”

For starters, he explains, email has to be highly available. That is, it has to work. All the time. Unlike social services, where things can go down on occasion, email has to stay online. “It’s part of your life, it’s like picking up the phone and not getting a dial tone,” Baggett says, describing what an email outage feels like. The bar is extremely high for a minimum viable product in this space, which is why so few startups can take on the job.

There are other things users don’t think about that go into building an email application, too – all those little functions that email has to provide, like handling different languages and character sets, managing attachments, providing real-time spellcheck, etc. These have to work, before you can even start layering on the new innovations like those that Inky is working to deliver.

In short, the vision at Inky is to start fresh with modern technology and build an application that can understand your email. In terms of feature set, that means things like the above-mentioned relevance sorting and smart views. Inky’s algorithms use machine learning to sort mail by importance – similar to Gmail’s priority inbox in spirit, but not broken up into separate sections (“Priority” and “Everything Else”) as in Gmail. 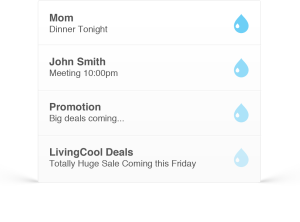 It also automatically organizes emails, tucking away social updates, daily deals, subscriptions and other non-critical messages, keeping them out of your inbox. And it can learn from your actions, too. For example, if you’re always moving messages from a particular sender into a particular folder, then it will start providing a button that lets you do that in one click. That’s the kind of thing power email users build rules to handle. “Filter rules are the usual programmer’s answer to this problem,” says Baggett, “but the problem is that for the vast majority of people, if you ask them to set up a rule they’re just going to be confused and their eyes are going to glaze over.”

So instead of rules, Inky will just learn. And that learning applies to not only discovering a message’s importance as sort of a binary function (important / not important), but also how important it is as related to others. For example, algorithms can identify who your boss is, or who’s family. This level of understanding isn’t yet fully developed in today’s beta product, but the overall goal is one of delivering that smarter inbox. “We like to call it email 2.0, where email is smart and knows what your mail is about, instead of being sort of a passive observer,” says Baggett.

The team at Inky is also working to find a better balance between Gmail’s conversation view and Outlook’s message list view. They’re working to make autocomplete smarter and faster. Inky’s inbox can already identify package-tracking emails. And the team is thinking about how to simplify client setup, so the process gets easier for today’s multi-device environment. To this end, Inky’s “zero setup” process involves a one-time configuration involving the creation of an Inky account and providing your email credentials. The security methods were the subject of debate on Hacker News, with the common refrain being “I’m not handing over my password,” as per usual. It’s not that simple, though, but explaining Inky’s security is a challenge that Baggett knows the company needs to figure out.

Inky takes security and privacy very seriously, he says, and they’re even consulting with crypto experts on the implementation. Details are explained here in the original thread, but the short of it is that Inky uses a method based on Zero-Knowledge Proofs where it proves to the server that you know your password  without actually sending over your password. “Silvio Micali was my academic advisor at MIT and he’s one of the pioneers of this class of techniques,” says Baggett. “This is all incredibly geeky stuff, but it actually matters in protecting people’s mail from hackers.”

Inky’s monetization plans haven’t been announced yet, but there are a variety of options, like providing a free service for users, and a paid option for companies, for example. Right now, however, the company is just focused on building the product. “We’re not going to compromise users’ privacy, though,” Baggett adds.

Bethesda, Maryland-based Arcode is self-funded, primarily through Baggett himself, and he has no plans to change that anytime soon. Windows and Mac beta builds are available for download here.