Previously, ForeSee measured data on the top 40 retailers, but this year, the firm expanded its list to the top 100. As before, the retailer rankings are generated by customer surveys. To compile this year’s list, 24,000 customer surveys were collected between Thanksgiving and Christmas, ForeSee says.

Amazon again scored 88 on a 100-point scale – the same record-breaking number it saw last year. In fact, the online retailer has now had the highest scores in ForeSee’s index for eight years in a row. ForeSee says this is partially due to Amazon’s appeal and the variety of merchandise it offers – but that’s almost too simple an explanation. It’s not just the quality, variety or size of Amazon’s inventory at play here, it’s the end-to-end shopping experience that Amazon provides on web, mobile, tablet – and even offline. Customers can scan the barcodes of in-store merchandise, then search for a better deal on Amazon, where often they’ll find one. With Amazon’s one-click checkout, fast shipping, no-hassle returns, value-added Prime membership accounts, and more, it’s not surprising to find that Amazon remains the high bar that others aspire to reach.

“At this point, Amazon has been dominant for so long and has such a history of focusing on the customer, its hard to imagine anyone else coming close,” noted Larry Freed, ForeSee president and CEO in a statement. “Companies should emulate Amazon’s focus on the customer, which is clearly linked to superior revenues over the years.”

In response the survey’s finding, Amazon today also issued an announcement, saying that holiday 2012 was its biggest holiday season ever with over 26.5 million items ordered worldwide on its peak day, which is also a record-breaking 306 items per second. Also on its peak day, Amazon’s worldwide fulfillment network shipped over 15.6 million units across all product categories.

For the second year in a row, Amazon’s tablet was the most popular item for customers, the company said. The Kindle Fire HD introduced 15 weeks ago remained the #1 best-selling, most gifted and most wished for product. In addition, Cyber Monday 2012 was the biggest day ever for Kindle says worldwide, Amazon added, and during the holidays, apps and game sales were up 250% year-over-year.

Meanwhile, as Amazon continued its winning streak on ForeSee’s list, Apple this year dropped 4% to 80 – its lowest score in four years. Previously, it had tied for second place. Now it’s no longer in the top five at all.

Dell.com also fell 4% to 77 and below the index average of 78, but the biggest decline went to JCPenney.com, which dropped 6% to 78 – not a great showing for JCP CEO Ron Johnson, whose previous experience as SVP of Retail Operations at Apple had many in the industry expecting he could turnaround the aging JCP brand by introducing new game-changing ideas, like the Apple Genius bars he pioneered, which now define Apple Retail.

Digital intelligence firm Compete also examined JCP’s decline this year, as well as the recent idea that the company is now back on an upswing. Using the firm’s Compete Rank (its ranking of top traffic websites), it appeared that JCP’s ranking has climbed back up from its 2-year low of #69 to #33 rather quickly, even though it didn’t reach last year’s ranking of #28. But when plotting JCP against the competition, it appears that the retailer’s upswing wasn’t unique – it was only facing the same level of seasonality that others in its group also faced. 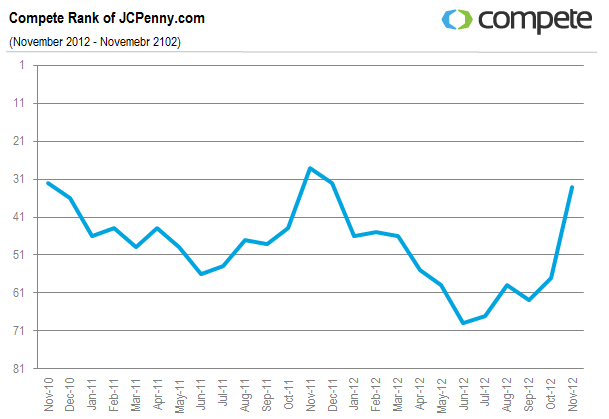 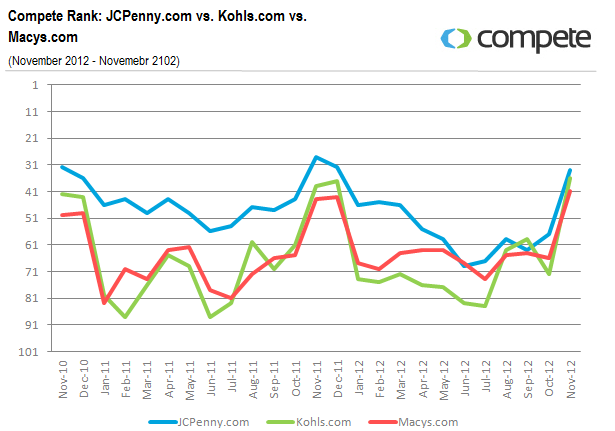 ForeSee’s customer data drives that point home – the retailer may have been on an upswing compared with its earlier lows, but when grouped with others in the same space, its clout is declining – at least in terms of its overall customer satisfaction.

According to other findings in ForeSee’s report, merchandise should be a top priority for two-thirds of retailers. The firm recommended that 65 of the 100 measured sites increase the appeal, variety, and availability of products to increase overall satisfaction. Customer satisfaction also matters, ForeSee added, noting that 67% of highly satisfied shoppers are more likely to return to the site and become loyal customers.

The full chart is available below.