Contactually, the makers of a lightweight CRM solution for email users, has launched an end-of-the-year “email report card,” which lets you look back through all your past email for 2012 and then get a letter grade for certain categories, like average email response time, number of new contacts, subject line length, and more. It’s a nice complement to Google’s Gmail Meter report, as it turns out.

Now, why would anyone (outside of quantified self enthusiasts) want to do such a thing? Well, Contactually’s report gives you some interesting insight into your overall communication strategy, including a lot of unique data, and it shows you exactly where you can make improvements.

Despite launching at the close of 2012, the report card tool isn’t necessarily a product limited to end-of-year use – although that might be a good time to take a step back and examine what you can do better in 2013, as is par for the course at this time of year. The tool will also offer you suggestions from experts on a variety of areas that make sense for Contactually’s core user base, like, for example: what can you do to get a better response rate on emails? 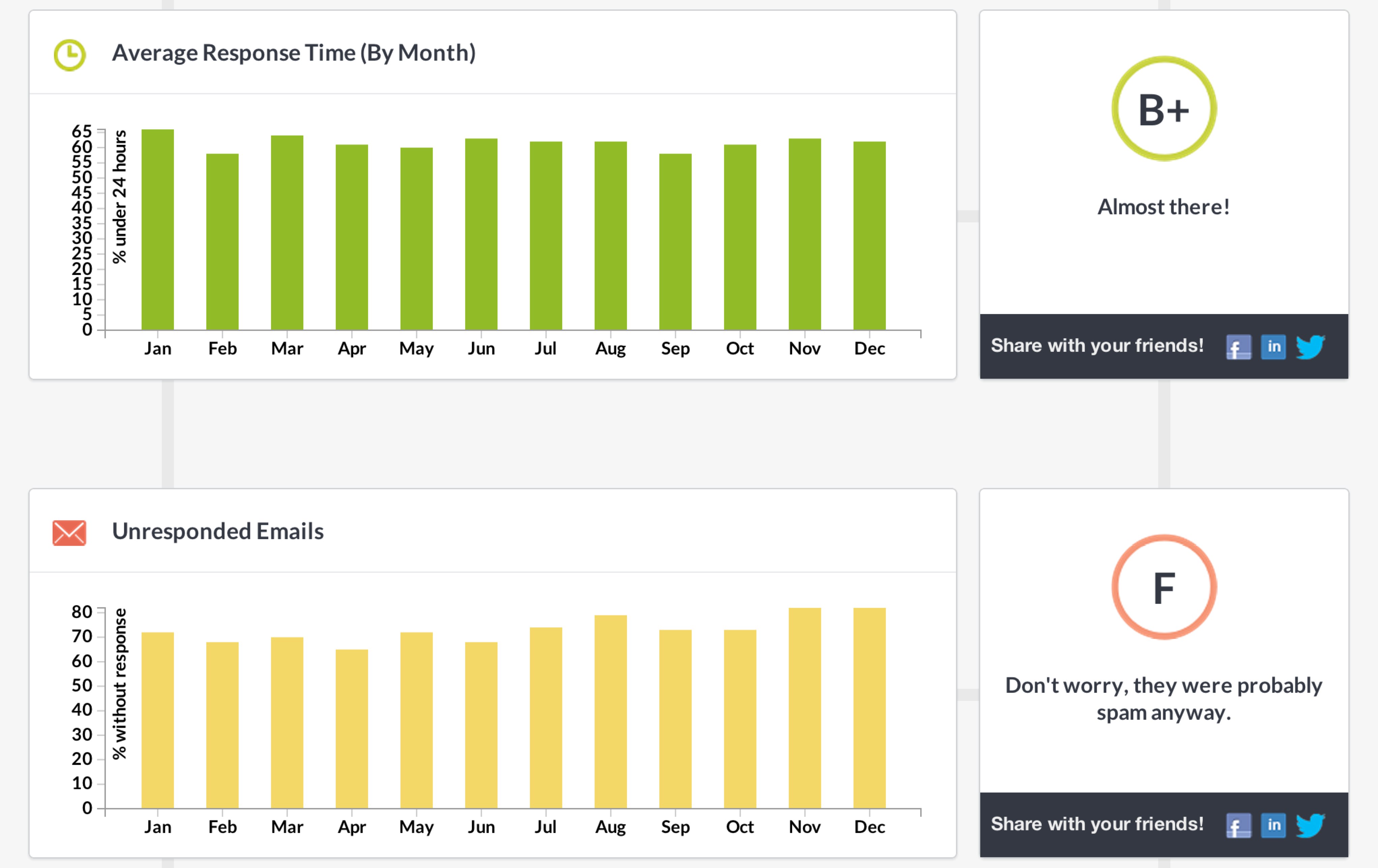 Here’s how the report card works. You go to reportcard.contactually.com, enter in your email address and then connect your account. In addition to Gmail, the service supports any IMAP account (like Yahoo and others) as well as Microsoft Exchange email. After authorizing access, you’re offered the option to post to Twitter, Facebook or LinkedIn while the report runs. You don’t have to do this.

Currently, there’s no indication that the report is running on this screen, but Contactually’s co-founder Tony Cappaert says they’re working on changing the text on that page, so users better understand that the process is indeed underway. However, you will receive an email that tells you the report is on its way. Users are told in the email that it may take up to 24 hours to process, but the report generally just takes a couple of hours to finish, Cappaert says.

When it wraps up, you’re notified via email then pointed to a link (like this, which happens to be Tony’s), offering an interactive report filled with the details of your email analysis. Here you can see things like the levels of un-responded to email in 2012, email response times, and even email totals for things like sent and received (which may be slightly terrifying). The report even breaks down the most popular words in your email subjects, how those change month-to-month, who you email the most, subject line length, your mood when emailing, and tons of other data which Gmail’s report doesn’t address.

It’s a fairly in-depth look into your email behavior – something for which there aren’t a whole lot of tools. Maybe you’ll learn something about yourself in the process, but even if you don’t, at least you can go around bragging about how you answered 20,000 of your 60,000* emails this year (ha!).