Shutterfly, the photo and personal publishing company founded in 1999, is today making good on its September acquisition of Penguin Digital, with today’s launch of a new iPhone application for photo prints and gifts. The app has been completely redesigned from the version released a few years ago, and now includes everything from photo uploads and storage to mobile ordering of prints and gifts, like mugs and iPhone 5 cases.

Despite Shutterfly’s popularity on the web, the company’s mobile experience was dated. Its older app, which had 1.5 million downloads, was focused on managing your photo library on the go, not on product creation and ordering. But the company knew it had to address mobile, which is why it acquired the early stage startup Penguin Digital this September. 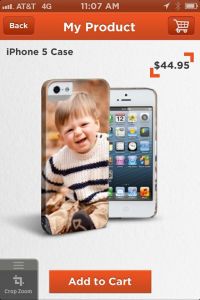 “Mobile commerce is now the new normal,” says Karl Wiley, Shutterfly’s General Manager in an interview with TechCrunch. “This is no longer just an early stage trend. And mobile photography is also the new normal,” he adds. “Next year, about 40% of the photos taken in the U.S. are going to come from mobile phones, and already about a third of U.S. consumers are using their mobile device as their primary photo-taking device. So for Shutterfly, it’s been incredibly important to get ahead of that curve and make sure our service is optimized for those mobile users.”

Of course, one could argue that Shutterfly was actually a bit behind the curve, which is why startups like Penguin Digital came to exist in the first place – there was a market that was under-served by the existing photo giants.

For those unfamiliar, Penguin’s flagship iPhone application was called  Mobile Photo Factory, or (hilariously) just “MoPho” for short. It allowed users to import photos from their iPhone’s camera roll, Facebook or Instagram and turn them into prints or other photo gifts. Shutterfly acquired the company for $7.1 million in cash earlier this fall. 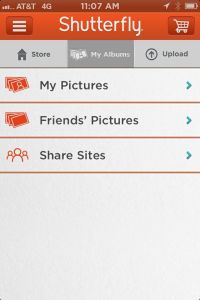 You can see how Shutterfly was inspired by MoPho in today’s new application. Like MoPho, the app also offers users a way to access photos saved in their Camera Roll, Photo Stream, saved albums, Facebook, Instagram, and, of course, in Shutterfly’s own storage. That storage, some may be surprised to learn, is actually unlimited. Yes, no caps, support for original-resolution photos, and all stored online for free. Today, the company has over 15 billion images stored on its server.

“It really is a differentiator for us…and something which people haven’t quite understood,” says Wiley. He explains that the company makes money off of getting people to order prints and photo gifts, not on storage. As of its Q3 2012 earnings, the company’s 2.2 million active customers placed some 3.6 million orders, up 40% year-over-year. However, average order totals dropped to $25.06, or 11% year-over-year. With the mobile application, average orders may drop again, since it will now be easier to order just a few prints with a tap, spending only a dollar or two at a time. But this ease-of-use means customers may start to order more frequently.

Overall, the Shutterfly app is attractive, well-designed, and easy to use. In testing the beta build, though, it did have some trouble uploading my 1,000+ photos in the background – after some time, the uploading process would stop. The Shutterfly technical team says that iOS can suspend or terminate background tasks, depending on system resources, so you may not experience the same issue.

In addition to photo prints and the usual gamut of gifts (mugs, iPhone cases, keychains, desktop plaques, canvas prints), Shutterfly has also introduced some non-standard print sizes, which are exclusive to mobile. In Shutterfly’s app, you can choose from 4-inch x 4-inch photos, as well as 4 x 6, 5 x 7 and 8 x 8, and even panoramic photo prints. Explains Wiley, the square prints are ideal for printing Instagram photos, while the panoramic prints take advantage of the iPhone’s new panoramic photo option. Prices for prints start at $0.15 and go up.

The company will expand on the types of printed gifts available in the app in the future, adding other things like cards, stationary, and simple photo books (perhaps similar to what SimplePrints or Mixbook’s Mosaic is doing, for example), as determined by user feedback. Shutterfly is also considering subscription-based options, but has “no specific plans” in this area at present.

The new Shutterfly app is available today in iTunes. For Android and other mobile users, a mobile-optimized website is the only option for now.