Sometimes you need to message a non-friend, and today Facebook starts testing if it can make a little money and cut spam by asking you to pay to ensure the recipient sees that message. Facebook’s also changing everyone’s privacy settings into dynamic filters that let “relevant” messages through. These moves address Facebook’s old settings that caused important messages to sometimes go unseen.

Previously, Facebook’s messaging privacy settings were cut and dry. You set your inbox to allow messages from everyone, friends of friends, or friends only. Any sender that didn’t qualify had their messages dumped in the “Other Inbox”, a little known sub-tab of the Inbox that most people rarely checked if ever. I had a friend who actually got a Facebook Message from a long-lost brother from the other side of the world but didn’t see it for six months because he wasn’t a friend of a friend.

Facebook’s trying to rectify this situation, and also make room for the new revenue stream it’s testing by replacing these hard settings with more flexible filters. Facebook is legally allowed to make this change to privacy settings because of the new language about messaging it put into its terms of service this month.

You’ll notice the word “mostly” in there. That gives Facebook the freedom to deliver messages to your main Inbox even if they’re from outside your preferred categories of senders if it thinks they’re highly relevant. For example, if you have the Strict Filtering setting and are in a group message thread with three friends and one non-friend, Facebook might allow that non-friend to reach your main Inbox because there’s a high likelihood you want to see their message.

The new filters help out with the new version of Facebook Messenger For Android that allows signups from people without Facebook accounts. If a non-Facebook user that has your phone number in their address book tries to message you, Facebook might let that through. 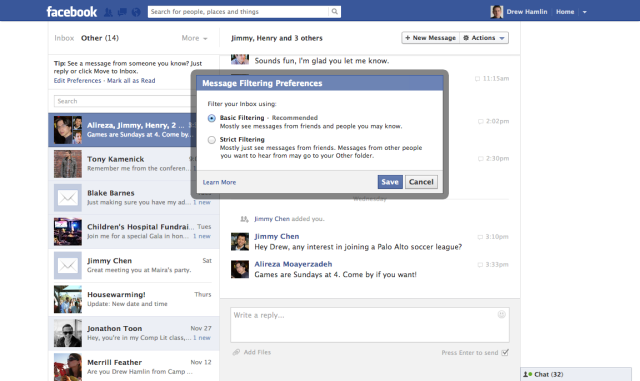 These filters also pave the way for Facebook’s new paid messaging system that it begins testing today with a very small percentage of users in the United States. The idea is that by letting people pay $1 or some other small fee, Facebook knows a message is important to the sender. The price also theoretically deters spam because conversion rates on spam messages are so low that having to pay to deliver them makes it very tough to earn money. Facebook is also capping the number of paid messages you can receive per week at one for now to reduce the potential for abuse.

Facebook explains that “Several commentators and researchers have noted that imposing a financial cost on the sender may be the most effective way to discourage unwanted messages and facilitate delivery of messages that are relevant and useful.” Considering the frequency cap, and fact that most people won’t need this at all or very often, it’s unlikely to turn into a major revenue stream for Facebook if it’s ever rolled out to everyone.

So what do the new privacy settings and paid messages (if rolled out) really mean for users? Above you see the message Facebook is showing users. Most people will hardly notice the difference. Thanks to the dynamic filtering, you might see more important messages that would have been relegated to the Other Inbox

If you previously allowed Messages from everyone you might see a little less spam. The extra economic signal means Facebook can be stricter in classifying messages as spam and simply refuse to deliver them entirely.

Finally, if you’re somewhat of a public figure, a beautiful woman, or otherwise get a lot of unwanted messages, you can now be more confident about using a more defensive privacy setting like Strict Filtering without worry you’ll miss messages about people you care about. Random strangers won’t be able to get through. Meanwhile, someone who’s friends with many of your friends, was tagged in photos with you, or that Facebook somehow thinks you’ll want to hear from will be able to pass through the filter. And if they want to make sure you see the message, they could pay the fee.

Some users will surely be annoyed by both changes. Most people don’t want Facebook meddling with their privacy settings without express consent. Others will likely be angry that anyone with some money to spare can pester them with Messages.

In the end, these settings might actually help people but we’ll have to wait and see what their impact is, and whether users are able to understand their value through their fears about Facebook exploiting them for dollars. But if I had to comment on the announcement of the paid messaging test, I’d say Facebook didn’t do a clear enough job explaining that this is to deter spammers who are way too stingy to pay for a Facebook message when they could email you for free.

If Facebook eventually lets legitimate businesses pay to message users, that would be very different than the test it announced today. Certainly fascinating, though. Facebook could offer high-priced messages that go directly to users and would be essentially guaranteed to be read. In that way it could leapfrog email marketing and its low open rates. Sponsored Messages, or some similarly named product could offer a super-premium channel for a brand to reach a huge audience quickly and vividly. Of course, users would likely hate these ads, saying the pollute the social channel. But that hasn’t stopped Facebook from putting app and game alerts in the notifications feed that used to be mostly wall posts and photo tags.