Markerly, a company being incubated at 500 Startups, aims to help web publishers increase their traffic from social media and understand why certain pieces of content are taking off.

“Markerly makes light of the dark web,” CEO Sarah Ware told me via email. “Articles get shared, but you never know the driving force behind the share. You also don’t know what your readers are engaging in most – what names they are copying to paste into Google and search more of, what companies they want to read more about.”

Apparently, this is a pivot from the company’s initial vision of providing a “Pinterest for text.” Markerly is still working on text-based sharing, but now it’s offering its tools to publishers instead of building a consumer-focused site. Even though the company never did a big publicity push around its new offerings, Ware said Markerly’s publisher tools have been live for a few months — they’re already used by 1,300 publishers, leading to sharing activity from 600,000 visitors.

From a reader perspective, if a site has signed up for Markerly, when you highlight an image or text in an article, you’ll get a toolbar allowing you to share that specific text over email, Facebook, Twitter, and elsewhere. After all, there’s a good chance that you’re more interested in pointing your friends to a specific passage or piece of information, or to a specific image or infographic, than to the page as a whole. (At least, that’s true for me — tweeting provocative or interesting quotes from articles is one of my main modes on Twitter.) Markerly makes that process easier. 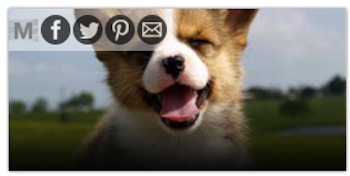 Publishers, meanwhile, can customize the experience, choosing the color of the sharing widget as well as which social networking services they want to connect to. (Ware said publishers also have an option to include a Tynt-style “Read more here” link in every piece of text that a reader copies and pastes, but she’s planning to turn it off since it doesn’t really help the publisher, and it annoys the reader.) And once the widget is live, publishers get access to analytics data showing which pieces of content within a page or an article are actually driving the most engagement. In fact, Ware said that about half of the company’s publishers sign up for the analytics piece on their own, without turning on the reader-facing sharing tools.

Of course, if you just use the analytics, you don’t get the benefit that Markerly can have on your traffic. Ware said that Markerly can drive up to 10 percent of the traffic to a given piece of content, though the average is more like 4 percent.

Markerly’s current service is free for publishers, and Ware said she plans to keep it that way, while adding paid analytics services next year.