Pretty Penny is a newly launched couponing startup, targeting a young, female audience – specifically the fashionistas and professionals who do a lot of their shopping online. The company, currently operating in bootstrap mode, offers its users a browser add-on that identifies the retail website a user is visiting, searches for relevant coupons and offers, and then presents those in a clean and simple user interface.

It’s a challenging task to take on established leaders in the couponing space, like RetailMeNot, which recently hit 450 million visits to its website and is now home to some 500,000 offers. But at Pretty Penny, one of its main goals is to focus on the user experience. In other words, it doesn’t want to look like a couponing website. According to Pretty Penny’s founders – two women with MBAs who currently still hold their full-time jobs – the majority of couponing sites and services, RetailMeNot being but one of the exceptions, seem ‘spammy’ and don’t appeal to women. 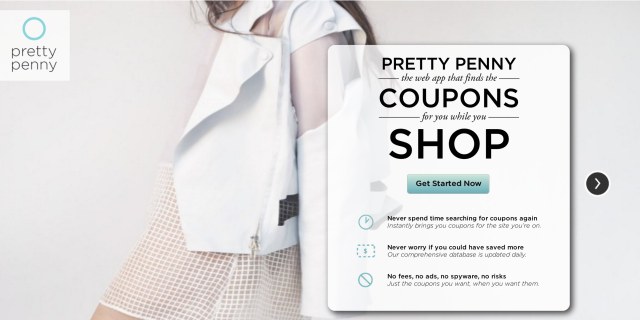 Pretty Penny’s CEO asked to stay anonymous for now because the founders are funding the product’s development out of their own pocket – they both hold full-time jobs and one co-founder just had a baby. The CEO’s background is in brand management and product development, and she has led the company to where it is now, in terms of vision and design. However, she worked with a designer to implement those ideas.

While asking to go unnamed for now makes it sound like the company could easily fall in the “side project” category, it has actually been a fairly serious effort on the founders’ parts. Pretty Penny has been in development for nine months, and one look at the website indicates this is not exactly a weekend hackathon creation. The company was also selected to be a part of Sierra Labs, the incubator arm of ISBX. The incubator’s approach is unique: It looks for strong teams with solid business plans who are in need of help with development and/or distribution.

Prior to joining Sierra Labs, Pretty Penny had been working with contractors. They now have access to a primary developer focused on Pretty Penny’s apps, and access to a technical team for additional support. The designer and an administrator still work on a contract basis. 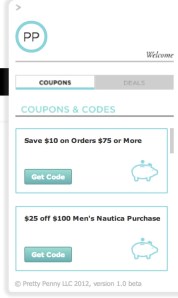 As for the coupon codes Pretty Penny provides, they are sourced from a number of places, including aggregators and feeds. The company has also entered in some codes into its database manually, such as those sent out in e-commerce brands’ emails or posted online. It’s also working on proprietary crawler technology that will go out and search for deals across the web, which will be included in the next version of the application.

Currently, Pretty Penny has over 200,000 active offers from around 12,000 merchants. Of those, over 1,700 involve direct relationships the startup has developed, including with Bloomingdale’s, Saks, and Macy’s, to name a few of the larger merchants. It also had some beauty brands already offer exclusive deals through its service.

RetailMeNot’s main focus is on finding coupon codes that work (users are asked to click yes or no to a “did it work?” dialog after attempting to use the code online). However, Pretty Penny has instead focused on a better understanding women’s behavior and mindset when they shop online, the CEO tells me. To that end, they’ve developed an algorithm that displays offers based on how relevant they are for a given shopper.

With today’s launch into open beta, the goal is to expand its test user base to better determine how well the personalization works and where it can be further improved. You can install the browser extension – Chrome-only for now – from here.