The not-for-profit Raspberry Pi Foundation has launched an app store for the $25 mini computer — called the Pi Store — to “make it easier for developers of all ages to share their games, applications, tools and tutorials with the rest of the community”. The Pi mini computer was designed with the mission to get more kids learning to code.

The move was announced on the Foundation’s blog today but has been something the organisation has been planning for a while. Back in July, Raspberry Pi founder Eben Upton told Young Web Builder that the Foundation planned to launch an app store. “We’re hoping at some point to offer ‘App Store-like’ functionality to allow people to make money from selling software they write,” he said in an interview.

The Foundation says it wants the Pi Store to be a one-stop-shop for development needs plus entertainment apps like games — with other categories including apps, tutorials, dev tools and media. “We hope that the Pi Store will provide young people with a way to share their creations with a wider audience, and maybe to a make a little pocket money along the way; as well as offering commercial developers an easy way to get their software seen by the Raspberry Pi community,” it writes.

The Foundation has partnered with IndieCity and Velocix to build the Pi Store. The Store offers a mix of free downloads and paid content. There’s also a tip-jar system to enable free apps to make a little money after the fact if people like what they see. 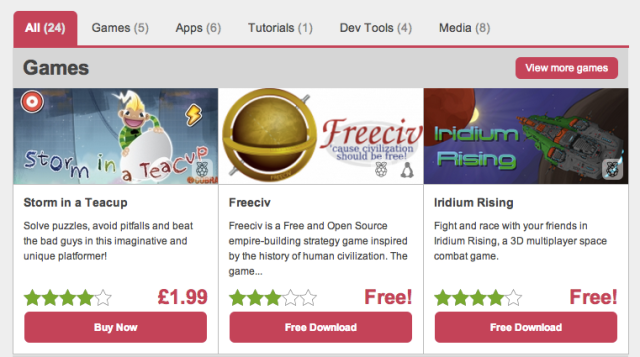 We’ve previously noted that it’s not always as easy as pie to get started coding with the Raspberry Pi — so anything that further lowers the barrier to entry is great news.