Following October’s update of its Android application, Dropbox today released a new version of its iOS app, which focuses on refining the photo-viewing and sharing experience. In today’s update, there’s now a new Photos tab, which offers a way to tap into a scrollable timeline of the photos you’ve uploaded into your Dropbox account.

As with the Android update, which preceded this one, the new iOS app offers a more visual interface for browsing through the photos you’ve uploaded – and, in particular, those you’ve added through automatic “camera upload” functionality introduced in an earlier release. At the top of the new photo gallery, there’s a link to your camera uploads section which will display your ongoing photo upload progress. Or, if you’re out of space, this section offers a link to buy more storage.

While the main section of Dropbox’s app still lists your folders and files, including those dedicated to “Photo” and “Camera Uploads,” the second button to the left now takes you to this new photo gallery. 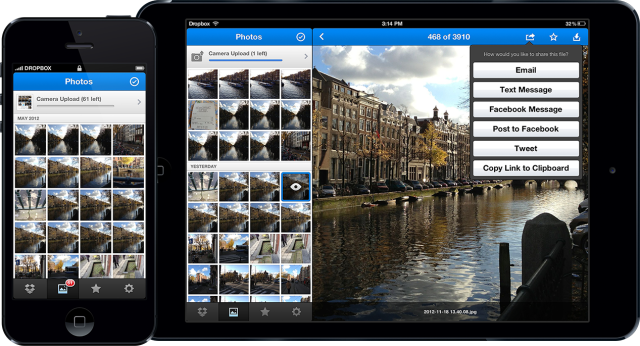 Here, the files aren’t laid out in a list, but rather as thumbnails – similar to what you would see in the iPhone or iPad’s default photo gallery application. When you tap on a photo, it appears full screen, with all the navigational and sharing buttons hidden from view. On the iPad, the thumbnail gallery can also display on the left side of the screen while in portrait mode, while photos can be viewed and shared from the right. 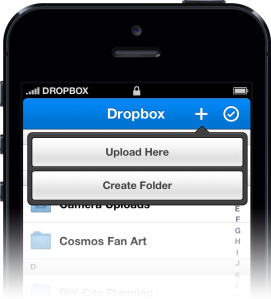 In addition to photo-sharing, Dropbox also added a plus “+” button to its user interface, appearing at the top right of any folder. This allows you to upload items directly from your iPhone or iPad to Dropbox or create a new folder quickly.

Overall, Dropbox’s design and user interface was also improved with today’s release in a number of more subtle ways. There’s a new icon, for example, and the app also removed the text labels on its tabs for simplicity’s sake, among other things.