It’s been a big year for the artist formerly known as GOGII. Back in October, the Southern California-based startup raised $18 million in series D financing from The Raine Group, Kleiner Perkins, Matrix Partners and GRP, bringing its total investment to just over $46 million. The round was a testament to the continuing success of its flagship product, textPlus, a free text messaging app that has seen 40 million downloads in the U.S. and Canada to date — half of which came in 2012 alone. In recognition of this phenomenal adoption, the startup rebranded from GOGII to textPlus in October.

But the rebrand is also an indication of the company’s evolving focus, particularly on the world beyond SMS. At the beginning of this year, the startup launched a Free Calls app, demonstrating its intention to stake a claim in voice as well.

As the mobile space has moved beyond its group messaging fad, textPlus, in turn, is looking to make a broader, platform (or PaaS) play. Rather than simply being an app with SMS, MMS, or group messaging features, founder Scott Lahman says that he wants textPlus to become an end-to-end mobile communications service that makes smartphones global and turns tablets into fully functional phones — without the friction and costs traditionally associated with that kind of service. 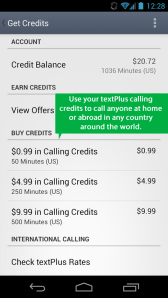 In pursuit of inexpensive and simple international calling, the company is announcing today that Android users in the U.S. and Canada can make calls starting at just two cents per minute to any international mobile or landline numbers. The founder claims that, on average, textPlus’ rates are up to 10 times less expensive (per minute) than typical international calling rates. And, as before, in-network calls to other textPlus users will remain free, anywhere in the world.

So, in practice, this means that Android users in the U.S. and Canada can continue to use their same textPlus cell number, allowing one account to work across all their devices. In addition, users can earn free credits or purchase credits from inside the app to make those international calls. The service works over WiFi, 3G, 4G, LTE on Android.

By keeping its international rates low, or at least competitive, when calling Canada, Mexico, the U.K. and China, for example, Lahman want to help redefine what it means to communicate globally with simple, cheap and borderless calling from any mobile device. “Whether you have friends and family overseas or travel internationally, we want to make your phone global, without the prohibitive cost,” he says.

In conjunction with its new Android support, TextPlus is also today launching a significant update to its iOS app, allowing users to access integrated texting and voice capabilities all in one — on the go. The founder says that textPlus has also received a significant uptick in speed and now provides a unified inbox that lets users text, talk and share on the go. 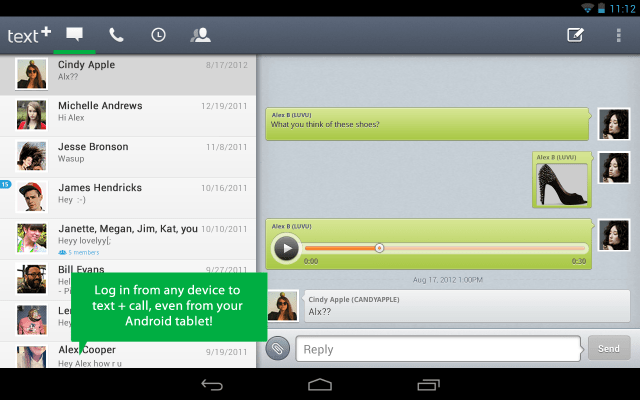