Apple is getting embarrassed right now as Google’s new iOS Maps app shoots to the top of the charts. But there is one upside to the beatdown. After three months of holding out to avoid Apple Maps, many people are now upgrading to iOS 6 or an iPhone 5. Last night I watched several people learn of the existence of Google Maps for iOS, and the first thing they did was update their phones’ firmware.

September 19th saw one of the most curious moments in human history. Our race has always made steady progress in our use of technology — we evolve. Yet when Apple released iOS 6 and replaced its native Google Maps with an inferior mapping app of its own, we actually devolved. A critical tool for modern life was stripped away from millions in a way that could only happen in the age of scalable software and ubiquitous mobile devices.

That’s why there was such an uproar. It wasn’t that Apple Maps was bad, it was that it was unnatural for us to take such a step backwards.

iOS 6 got off to a fast start. Just one week after its release it was installed on 60 percent of iPhones and 41 percent of iPads, and over 100 million of the total 400 million iOS devices out there. Then people woke up. They heard terrible reviews from friends and bloggers alike about Apple Maps sending people to the wrong destinations and off cliffs.

Rumors swirled that Google would eventually release its own independent Maps app for iOS 6. Many people decided they’d just stay on iOS 5 until Google Maps hit the App Store, and iOS 6’s install rate flattened. One study showed penetration at 40 percent at the end of week one, but just 45.3 percent by the end of week two. Some reports put penetration as high as 60 percent one month after launch. Even if these numbers are low and have increased significantly since October, there could still be nearly 100 million people who haven’t upgraded. Either way, all of the upgraded operating system’s social tie-ins — Passbook, smarter Siri, and more — couldn’t convince people to downgrade their maps.

And since the iPhone 5 comes pre-installed with iOS 6, sales could have been hampered by fear about Apple Maps.

Now that Google Maps for iOS is out and we’re going in the right direction again, people are understandably enthused. Just how excited people are to relegate the un-deletable native Maps app to a back folder is definitely a black eye for Apple’s software team. On the plus side, though, many people just lost their last reason to stay off iOS 6 or hold onto their iPhone 4 or 4S.

Along with revenue from hardware sales, boosting adoption rates for its latest mobile operating system is good for Apple in several ways. Getting more people using the new Siri helps it get better, and iOS 6 has better security, too.

Most importantly, though, iOS 6 adoption reduces fragmentation for developers. More of them can now take advantage of new features and release iOS 6-only versions of their apps without fear of alienating users. This is a serious issue. When I wrote about Rockmelt’s recently launched iOS 6-only iPad app, we got tons of comments and tweets from people pissed they had to choose between Rockmelt and Google Maps on iOS 5. 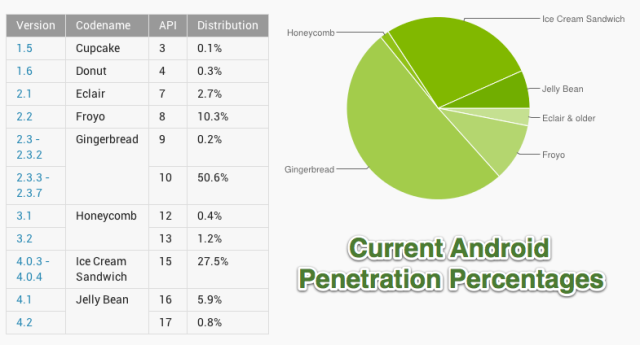 The percentage of iOS users on the newest builds is also a point Apple can hold over Android, whose limitation-filled carrier deals make it take years for firmware updates to trickle down. Five months after the release of Android 4.1 Jelly Bean, it was on just 5.9 percent of Android devices, and over a year after Ice Cream Sandwich dropped, it still has a penetration of 27.5 percent. This makes it tough for developers to push updates and fix bugs across all the builds.

For all the shame Apple’s swimming in right now, Google Maps could end up attracting developers to Apple’s platform or keep them there. And just the fact that Google Maps is gaining traction so fast, and Apple isn’t stopping it, could embolden other devs to take swings at besting Apple’s other native apps.