Ping.it, a Norwegian startup that wants to cut down on social networking noise by building a more controlled sharing platform — described as a cross between email and social networking — has launched its platform in open beta today. The startup was shortlisted at this year’s Dublin Web Summit’s startup competition, one of 100 to make the final shortlist (in the event, Ping.it walked away empty handed).

Ping.it reckons today’s social networks are broken because they have become too noisy — or ‘cluttered’ with posts — meaning users have to wade through scores of stuff they’re not interested in before finding something that does pique their curiosity. Its answer is to build a new social sharing platform — the eponymous Ping.it — that strips back the sharing model so that you choose individual contacts/groups to share with, a la email.

The currency of Ping.it’s network are ‘pings’ — aka targeted shares (pinged content can be re-pinged, liked, commented on and so on). Rather than broadcasting a piece of online content to all your friends by posting a link to it in a social network status message, Ping.it encourages you to ping the URL to particular contacts, i.e. those you think are going to be genuinely interested in the thing you’re sharing.

Inside its currently invite-only walls (requests for invites will apparently be turned around very quickly), the network has a clean look — which has a bit of a Google-Reader-before-Google-took-away-its-social-features feel. 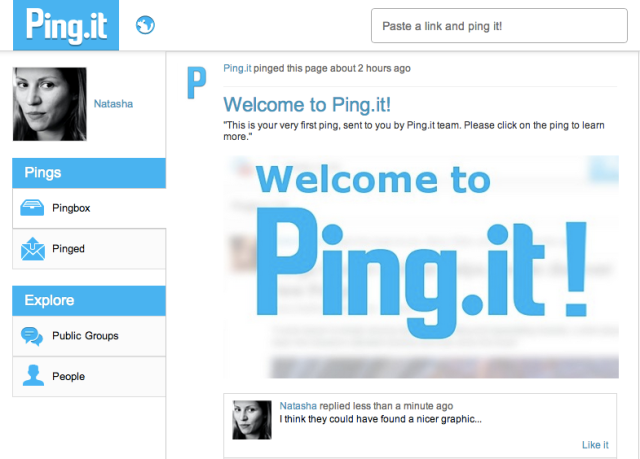 The network includes a public groups feature, so you can share content publicly but still in a targeted way (i.e. by sharing it to a relevant group). And you can send pings to people who aren’t on the network yet, which just sends them the link via email (with a ‘sent via Ping.it’ footer). Plus, a Ping.it button can be added to your browser bookmark bar to click to share your current URL as you browse. You can find other Ping.it users to connect with by browsing through the people tab — or looking at public groups to see who’s posting.

The cycle that Ping.it reckons is happening here is that social networks have become a victim of their own success. So paring sharing back to something that’s more similar to the way things used to be, with more of an email-style model of targeted missives but with the addition of social features such as likes and comments, is the way to go. Two steps forward, one step back if you will.

Why not just go back to using email entirely? Well, it lacks the social features for one thing, but Ping.it also says its system is better than email because it’s spam-proof. While an email address can be acquired and spammed, it stresses that messages can only arrive in your Pingbox (see what they did there?) if you have added the message sender as a Ping.it contact.

Now it does seem rather counterintuitive to attempt to tackle the problem of social networking noise by creating another network and therefore generating more noise — albeit, noise that’s siloed away on A N Other platform, but founder Marius Lian sidesteps this point when I put it to him. Instead, he goes on to flesh out his thesis that email and social networks are broken.

“The current model where people post to public walls in my opinion creates this social clutter. People are constantly ‘discovering,’ ‘exploring,’ and every now and then find something interesting,” he writes in an email. “Enormous time is spent looking for content. We believe the reason why email is still surprisingly the most popular method of sharing content is because most people are more comfortable sharing with those who they know want it. It is also important to note that we want people to still use email, we just suggest them to move sharing links to Ping.it – a safe and spam-free inbox for personal recommendations that almost acts as a filter against all clutter.” 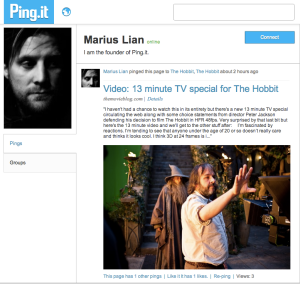 Lian also makes no mention of the fact that Facebook, for example, has added sharing segmentation features so you don’t have to broadcast your updates to everyone. And Google has of course launched an entire social network (Google+) based on targeted sharing to particular ‘circles’ of friends — even though it killed off its Google Reader community in the process. Presumably Lian would argue such features are being overlooked on those social networks as their environments also enable — and arguably encourage — mass/blanket-sharing.

Besides the existing social networking giants like Facebook, competitors for Ping.it include “many link-sharing sites,” says Lian, such as bitly, BuzzFeed, Chime, Delicious.com, Kippt “and so on.”  But he argues that rival services aren’t zeroing in on “direct personal sharing” in the way that Ping.it is, claiming that much URL swapping still takes place via email and IM.

“Noone really focus on direct personal sharing when in fact most people share links directly. They use e-mail or IM to do that. We have built a lightweight platform, that’s a better, faster and more engaging alternative to pasting links to content into your e-mail or messenger,” he argues.

Ping.it does not support photo uploading, so if you want to share photos they need to be links to photos that are already online somewhere on another web service. The startup says it’s not aiming to compete with media hosting services but is purely interested in link sharing.

“We want to avoid [photo uploads],” says Lian. “There are so many services already offering photo/video uploading. Instead we plan to integrate towards existing services. We are developing towards the APIs from YouTube, Instagram and Spotify to mention some. The idea is that people easily can ping and consume content on our platform and most importantly that it is relevant for them. So we are not solving a problem that people are not able to share/upload. We focus on relevance – that what already exists can be recommended personally. If we will let users upload photo/video through Ping.it in the future it will be through Ping.it on existing services that already offers this.”

Ping.it’s business model will be related to advertising, but Lian says he does not want to “force advertising in Ping.it” — which is hardly surprising, since if your mission is to create a noise-less network, you can’t very well open the floodgates to advertisers to trample all over your users’ happy place. Instead, he envisages launching “Ping.it Brands” at some future point — “where users can connect to their favorite brands” to allow the brands to ping them with “relevant” content.

“Ping.it should be all about relevance, meaning small tips from people you trust, not five to six status updates from hundreds of sources daily. When the time is right we plan to launch ‘Ping.it Brands’ where users can connect to their favorite brands,” he says.”Unlike small status updates, a ‘ping’ is much more like an email. It’s personally directed to someone.  This forces ‘brands’ to be relevant. What they get from this is fans with a high engagement rate (87.5 percent in beta).

“We will make money from the brands based on a Pay-Per-Fan monthly subscription model. This business model is good for all three parties: Brands get engagement, fans (users) get relevance and we get paid for our time spent hacking and running servers.”