Bing and Yahoo may have already released their respective looks back on the top searches of 2012, but let’s be honest here – Google’s 2012 Zeitgeist is the one we’ve been waiting for. Now in its twelfth year, this year-end wrap up tells us what the world has been searching for, as seen through the billions of searches performed on Google throughout the year.

This year’s Zeitgeist is Google’s most global, the company says, offering 838 lists from 55 countries this year. Also new in 2012 is an interactive map showing where and when some of the top search terms began to spike. Yahoo, too, had tried to spice up its annual list with some visual pizazz this year, offering the top news topics and other trends as tweetable, shareable widgets laid out in the now-common, almost Pinterest-like, image pinboard style. (With ads, natch).

But Google’s interactive map, available here on the Zeitgeist 2012 website, is a far more visually appealing experience. Visitors can click on map pins or the timeline dots below to begin exploring 2012 top searches, where pop-up lists link to events that defined the year, such as the London Olympics, Whitney Houston’s passing, Hurricane Sandy, Gangnam Style, and more.

What’s really interesting about how this map works, is that it lets you compare one of this year’s trending terms to other popular ones in that same genre. The term’s impact is represented on the map by round, red balls (instead of pins). The balls represent the ten countries where a search term had the highest probability of occurring, with the larger ones indicating a greater probability. Using an example from above, that means you can compare Gangnam Style’s reach with that of the Kony 2012 video, for instance. 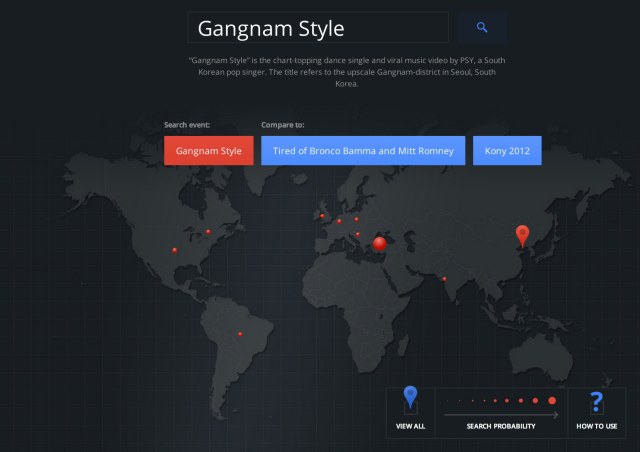 In addition to the map, Google also released a video tour of the top searches if you would rather lean back and watch, rather than click around and explore. It’s also releasing an Android application version of the Zeitgeist today – not yet launched at the time of writing – as well as an iOS app out “soon.”

But of course, what we all want to know is what were those top trending searches of 2012? Well, here you go:

Google notes that Houston, a global superstar, not only topped this trending searches list, but also topped many countries’ lists as well as two other overall trends lists (People and Performing Artists).

The Zeitgeist breaks down the trends in other categories, too, including Images, where pop stars like One Direction and Selena Gomez just beat out the iPhone 5, as well as Athletes, featuring Jeremy Lin in spot #1.

Also, why is there an “Airlines” category, Google? Is this an ad?

Google also added its own social property, Google+, to this year’s Zeitgeist with #SOPA topping the list, and #Awesome in spot number two. Both terms hint at Google+’s still heavily tech-focused audience, with SOPA, aka the Stop Online Piracy Act, being the U.S. bill introduced to fight trafficking of copyright and counterfeit goods online, resulting in widespread Internet protests throughout 2012. (And really, who else but tech folks would add a hashtag when writing the word “awesome” in a post?)

The full Zeitgeist, including the video, map, worldwide and country lists are available here on Google’s dedicated Zeitgeist 2012 website. Keep watching Google Play for the new Zeitgeist app (not to be confused with apps for Google’s Zeitgeist conference, already live).