Amazon today announced a new feature called Friends and Family Gifting, aimed at helping customers better organize their gift lists and gift ideas for others, generate Facebook-enabled gift suggestions, receive reminders, and share their gift lists out via email or to social networks like Facebook, Twitter, and Pinterest.

Many Amazon customers have already been using the site’s Wish List feature to create custom lists for others for quite some time, of course, and Amazon has also previously offered ways to search for the public, shared wish lists by entering a friend’s name or email address. To some extent, today’s launch is simply an extension of those offerings, rounding out the gift-buying experience even further.

However, there’s a bit more to this news beyond just being a better gift list. The new feature, presented in partnership with MasterCard, is a swipe back at Walmart, which has been ramping up its own e-commerce initiatives over the past year in an effort to better compete with Amazon. Although Walmart remains the world’s largest brick-and-mortar retailer, the company understands it must compete in the e-commerce space as well, or risk losing business to e-commerce giant Amazon.

Through Walmart’s e-commerce innovation lab, @WalmartLabs, the company has been able to quickly develop, test and launch a number of new apps, services and features, including Walmart.com’s new search engine, a subscription-based commerce option, and, last year, it added a Facebook-based gift recommendation service known as “Shopycat.” Just ahead of the holidays this year, Walmart integrated those same Facebook-powered gift suggestions directly on Walmart.com.

Now, like Walmart, Amazon is also debuting its own Facebook-enabled gift suggestions feature, allowing Amazon customers to connect their Amazon and Facebook accounts together in order to discover gift ideas for friends based on their Facebook Likes. Unlike on Walmart’s site, Amazon’s suggestions also have the benefit of offering ideas based on your friends’ own gift lists, or those you created for them in the past. However, in tests, Amazon failed to connect a Facebook friend’s account and accompanying suggestions with my gift list of the same name (with birthday attached!). But this is the kind of kink that could be resolved in the future.

The Friends and Family feature also allows users to store important dates like birthdays and anniversaries, and enable reminders which are sent out via email. Upon first signing in and visiting the new Friends and Family page, Amazon will have already listed your Amazon “friends” whose lists you’ve followed in the past, and it will prompt you to add birthdays for other friends, based on the shipping addresses you’ve stored under your account.

When connecting to Facebook, Amazon doesn’t just provide a list of friends, it also discovers which of your friends already have an Amazon Wishlist, and features those friends above the others. This is an extremely helpful option, as searching for friends by email doesn’t always work out if you don’t know or have their email on hand. This feature also has the interesting effect of making Amazon.com feel a bit like a social network. 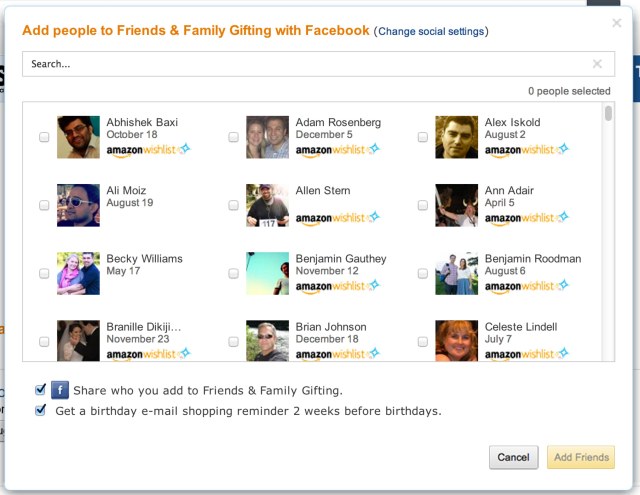 On this same screen, you can opt to receive reminders and share on Facebook that you’ve added these people to Friends and Family Gifting on Amazon. Both are enabled by default. For those who don’t want to opt into the Facebook integration, there’s an option to add friends and their birthdays manually, too.

As for the MasterCard integration, the credit card company is clearly benefiting here – the feature is “presented by MasterCard” and there are ads both at the top and the side of the Friends and Family page. (Wonder how much this ad space goes for these days?)

In addition to the Facebook-enabled suggestions, Amazon will also help make gift recommendations for kids, as younger children aren’t permitted to have Facebook accounts. These more general gift suggestions can be filtered by age and interest.

Given that the holidays are only a couple of weeks away, it’s interesting that Amazon waited until now to offer this feature which would have been useful prior to the big holiday sales occurring just after Thanksgiving.