If you thought the mobile communications mix was rich enough already – with voice, text, IM, social networking and so on – think again. An Israeli app developer reckons there’s room for one more way to exchange messages, which combines the urgency of a voice with the convenience of text.

SayWhat is an Android app (free to download from Google Play) that lets you respond to an incoming voice call by sending a text message or emoticon/symbol, instead of answering the call.  It also includes a ‘can you talk’ button that pings your contact to check whether they are free for a call before dialing their number – so you know whether or not to make the call in the first place.

The broad-brush idea here is that you don’t always have time to answer a call – but you don’t necessarily want to flat-out reject the call since doing that is not necessarily a nuanced enough response for today’s hyper sophisticated mobile communicators.

Text missives can be chosen from a list of stock phrases such as ‘Hi, what’s up?’ or ‘Getting back you’, which are pigeon-holed into basic categories like ‘work’, ‘pleasure’, ‘casual’ and ‘love’ for quick reference. You can also compose your own missives in real-time within the app so you can respond in more detail.  The point, in the app maker’s words, is to establish “the agenda of the call” before you start doing any actual talking. 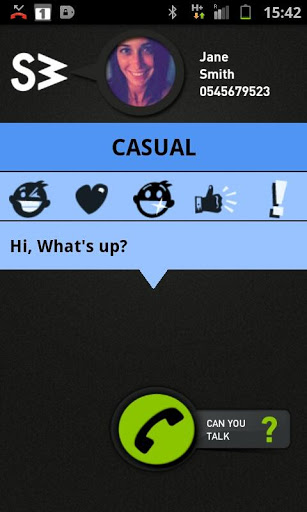 SayWhat also puts a lot of emphasis on fun – hence the addition of emoticons/symbols to the mix – which the developer describes as “a proven market for teenagers worldwide”.

Now, before I go any further, it’s worth pointing out that Android 4.0 (and above) includes a feature – called Quick Response — that lets you respond to an incoming call with a ‘here’s one I made earlier’ pre-written text message. Which does rather steal some of SayWhat’s thunder. Presumably the app maker is hoping to add more value in its offering – by pimping it out with flourishes such as the aforementioned emoticons and categories — so you can respond to a call from your boss with a winking smilie (if you dare).

Asked how it plans to distinguish its app from Android’s built-in text call reject feature, SayWhat sends me an email saying: “We’ll get back to you shortly” – so you can’t accuse them of not practising the text-based holding responses they are preaching. And indeed, they are true to their word, responding at length later to explain that their app empowers the caller by letting them find out what a call is about before they decide to answer it.

“The SayWhat app adds a completely new dimension for the recipient. While you can text back with a response through a reject with a call text option, until now, you had to answer the call to find out what it’s about. The biggest value add of the app is for the recipient who now can see what the call is about before they answer it, helping to set the agenda (similar to an email subject line),” says the app maker’s CEO.  “The use cases for the app are endless. (Just think how many times are you in a meeting and the phone keeps ringing and ringing and you don’t know whether it’s an emergency or if your husband is just calling to see what’s for dinner). SayWhat answers that critical question of why someone is calling.”

Moving beyond Android’s Quick Response feature, any smartphone user can of course effect a fairly similar outcome — by rejecting an incoming call and then sending an SMS to that person straight afterwards.  Or by using IM before making a call to find out if the person is free to talk. But SayWhat’s system cuts out a few steps since you can simultaneously text the caller from the call screen – thereby making it that little bit simpler to make your communications that little bit more convoluted. That, as they say, is progress.

The person calling you doesn’t need to have SayWhat installed to view your ‘I can’t take your call right now but I still <3 you’ missive – if they don’t have the app they’ll get your text response by SMS.  Presumably some of the more obscure symbols won’t necessarily translate to text though. “The best user experience is achieved when both sides have the app,” the CEO tells me.

Of course, in the SMS response instance, there isn’t a massive difference between that and the manual method any old smartphone user can perform – i.e. pressing call reject, then composing an SMS to the caller to ask what they want — but with SayWhat you’re likely to gain a few seconds since it can all be done from within the same app. 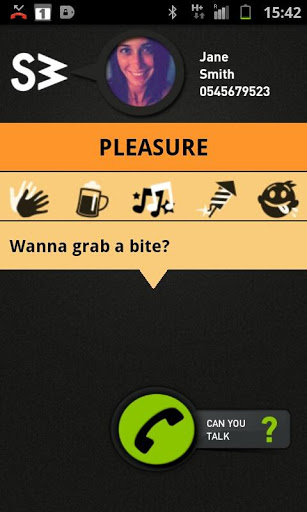 SayWhat’s CEO, Noam Wolf, disagrees that the difference between his app and IMing/manually texting someone who wants to speak to you is fairly incremental. “IM/SMS + call are two separate processes managed by two separate apps. SayWhat utilizes the Android call layer and open XMPP protocol to create the Enhanced Call Information (ECI) technology.  By bringing Enhanced Call Information (ECI) into the call we’re creating the call metadata,” he writes in an email.

The wider point, though, is that being able to incorporate a little text-based, emoticon strewn back-and-forth prior to a call makes for a richer, overall communications experience – and allows people to understand the basic intent behind the call before the fact, he says.

“Text and emoticons (as well as caller information and photo if available) can play an important role before the call (pick up or reject), during and after the call (call log to remind you what you talked about at a specific date/time),” Wolf argues, stressing again that rival text-message-to-call-reject apps don’t include the option to reply by emoticon.

You could say a key plank of SayWhat’s mission is to ‘verbify’ emoticons. “The real added value is in the caller side, being able to call and text (or emoticon) together and, for the recipient, they can know what the call is about before they answer it,” he says. “Another unique functionality is the exclusive ‘can you talk’ button, allowing the caller to know if the recipient is available for discussion even before making the call.”

Wolf and the rest of the team behind SayWhat describe themselves as “veterans of the mobile industry”. Wolf has apparently created “dozens” of mobile apps on the Israeli market — and sold his company to Walla, part of Israeli comms company Bezeq Group.

SayWhat is currently free to download and will remain so in future, says Wolf. Their business model focuses on charging for “premium content” – such as “emoticon packs” and “predefined sets of messages”. “One of the directions we plan to go is a festive holiday edition with predefined messages for Xmas, Valentines, Independence Day etc, assuming that a lot of the calls going out in the holiday season are for holiday best wishes or even offering company logos,” Wolf adds.