The iPad mini and the fourth-generation iPad each accounted for just 2 percent of overall iPad traffic during their first month of availability, according to mobile analytics firm Localytics. Both were released at the beginning of November, with the iPad mini debuting as a brand-new form factor and the fourth-gen iPad getting internal component upgrades plus the addition of a Lightning port.

Compared to past device performance, however, the combined share of both iPads, while small, actually isn’t that far off the pace of previous new device introductions. The “new” or third-generation iPad, for instance, managed to top the original iPad’s share among Apple tablets in month two, which is still well within the realm of possibilities for the period ending in December, since there should be many more iPads in the market by then. This time around, LTE versions of both the iPad mini and full-size, fourth-gen iPad also weren’t available until toward the end of the month, and the impact of users waiting on those versions to purchase could have affected overall share.

Localytics saw the third-generation iPad climb to 14 percent of overall Apple tablet share within a single week of its launch, so 2 percent for both new models in one month doesn’t look so good by that measure. The iPad 2 remains the most popular version overall, still making up more than half of all usage of apps running Localytics’ mobile analytics platform.

Engagement, based on iPad session length, also turns up shorter average time spent in-app on newer iPads, including the shortest time of all on the iPad mini. That’s something Localytics chalks up to its smaller form factor, which may have users treating it more like a smartphone than other Apple tablets. Both also showed fewer sessions per user spent on average than other Apple tablet hardware, but the iPad mini edged out the fourth-generation iPad in this category. 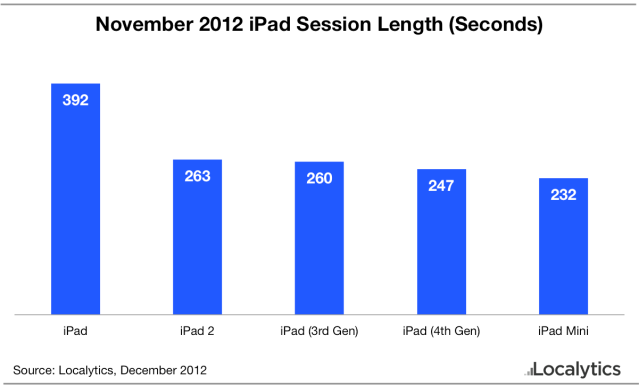