Grokr, a mobile startup backed by $4.2 million in funding from NEA, U.S. Ventures, Triple Point, and Lerer Ventures, is today announcing a new mobile application for iOS that aims to rethink how search should work on mobile. Or, simply put, the app is something like an iOS version of “Google Now.”

Google Now, for those unfamiliar, is a feature designed for users of Android devices, which learns from your current search behavior and then proactively provides you with information based on its understanding of you and your interests. It can provide weather information, flight details, sports team updates, traffic updates, calendar events, and more. 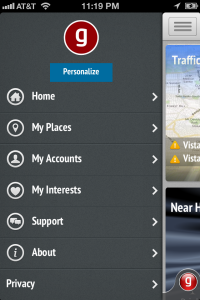 The new Grokr app can do much of the same, but also offers even more by incorporating the info it gathers from your social networking profiles on other networks, like Facebook, Twitter and LinkedIn. Meanwhile, Google Now’s understanding is limited to the information gleaned from Google’s own services. Granted, that’s still a truckload of information, but it isn’t necessarily a complete picture.

The Sunnyvale-based startup has been developing the technology for a couple of years, focused on this idea of reinventing search on mobile. “If you really look at search on a mobile device, it’s an artifact from the old PC world,” says Grokr co-founder and CEO Srivats Sampath. “What they did is they took something that was designed for a PC with a large keyboard, large screen, a mouse, and a person sitting at the desk using 10 fingers, and they took that, miniaturized it, put it on a phone.” 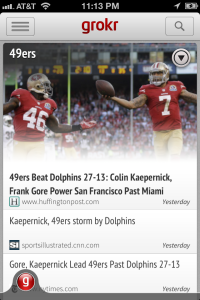 In thinking about how search could be reinvented for mobile, the team at Grokr focused on several critical areas it wanted to fix. They wanted to make search less of a manual process and more predictive, and they wanted to move search from a keyword-based model to an entity-based one (meaning it wanted to understand the meaning behind words, too).

The company built Grokr’s own “Knowledge Graph” on top of the same one that Google used: Freebase, a community-contributed facts database. And then, Grokr added to it. “We based it on Freebase,” says Sampath, “then we added another 50 to 75 different data sources. Right now, we have 700 million facts in the database, and we have 25 million entities. Then we built machine-learning algorithms around that. That allowed us to rank those entities,” he explains.

In addition to data from Freebase, Grokr also sources from external entities like Yelp, Factual, Rovi and many others. 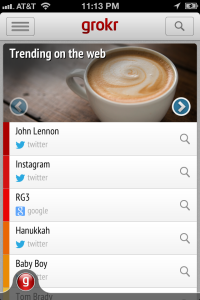 In layman’s terms, this means Grokr understands the difference between “Taj Mahal” the monument, the singer, and the hotel, and can serve up the most relevant results given its understanding of what the user was really after when searching.

As for the app itself, while the big draw will be its Google Now-like proactive alerts, it also serves as an alternative search engine (there’s actually a search box in the app which leads to results sourced from the web and Grokr’s understanding of the users). The app also works as something of a personalized news source, too. When you launch Grokr, it customizes the interface to show you local weather, traffic, trending headlines and search terms, movies, and other personal entertainment-focused recommendations like nearby restaurants, bars, parks, and more.

“We’ve essentially built Google Now for iOS, but what we’ve also done is added more signals than what Google Now has. Google Now primarily uses location and time of day,” says Sampath. “We use location, time of day, your interests, your intent – just a whole bunch of signals to bring forth all this information to you.”

Like Google Now, Grokr offers traffic info based on your commute patterns and sports updates. It also pushes breaking news alerts to you based on your interests. But when customizing other things – like the news headlines it shows, for example, it pulls in data from your interests (e.g. your headlines might come more from TechCrunch because you “liked” it on Facebook).

In addition, while today’s app serves as something of a base product, it’s far from being finished. Google Now today offers more types of alerts, with things like package-delivery notifications, restaurant reservations, research topic alerts, and more. Sampath said because Grokr doesn’t yet offer more granular control over notifications, it’s keeping the alerts to a minimum to not bombard the user, but that may change in time. The company is thinking about how it could incorporate other services in the future, like a user’s calendar or email, for instance. Contacts, however, will not come into play due to user privacy concerns.

The big picture here is that Grokr is trying to build something of a predictive search engine – no small task, given Google’s dominance in all things search. But the company believes that mobile allows for this kind of opportunity. “Predictive search, based on all the personal, big data…allows us to do all this amazing stuff.”

He notes that, even the data is personalized and anonymized. They’re not tracking you as an individual here, only you as represented by your interests and behavior. (Not creepy, right?) Down the line, Grokr could even begin to predict things that you want to buy, or it could connect with your health data to offer even more meaningful insight than it does today.

The iOS app won’t be released until tomorrow, but you can stay tuned here for the launch.