With today’s new funding also comes the reduction of the price of its genome analysis service to 99 smackers. This isn’t special holiday pricing (as 23andMe has run repeatedly in the past) the company tells me, but rather what its normal pricing will be from now on.

This move is overdue, at least as far as 23andMe’s business model is concerned. Just yesterday TechCrunch Conference Chair Susan Hobbs told me she was waiting for another $99 pricing deal to buy the Personal Genome Analysis product.

23andMe has experimented with various pricing models, including subscription, since its founding in 2007, but has been at an official and prohibitive $299 price point until today. It’s also apparently been rigorously beta-testing various price points in the past couple of weeks, at some point experimenting with some lower than $99. 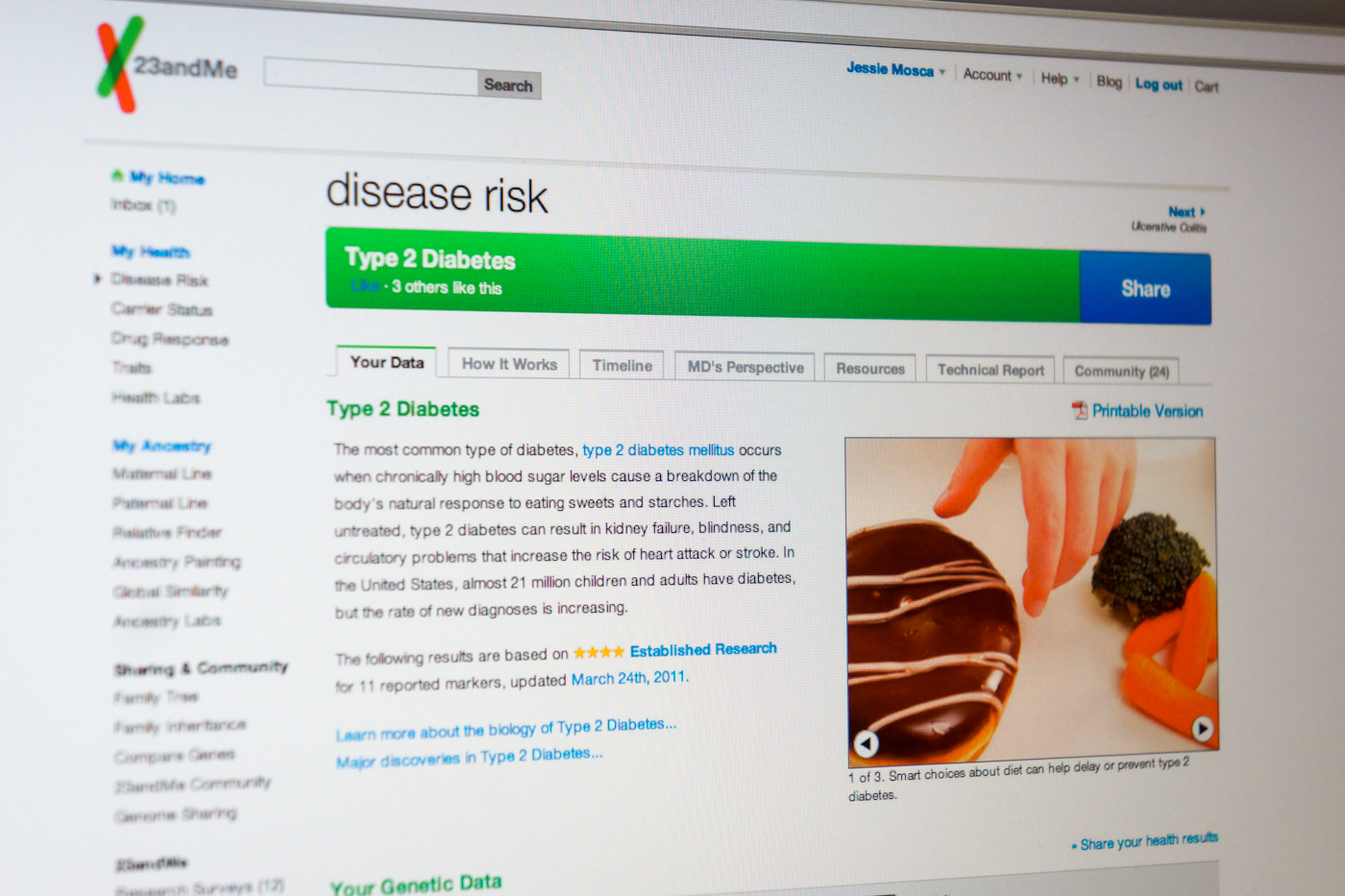 For comparison, the company’s original pricing began at $999 and offered subscribers just 14 health and trait reports versus today’s 244 reports, as well as genetic ancestry information. Natera, Counsyl and Pathway Genomics are also in the genomics space, but they work by offering their services through doctors rather than direct to consumer.

Since the company’s launch five years ago, it’s had 180K civilians profile their DNA, and representative Catherine Afarian tells us that, post-price drop and funding, its goal is to reach a million customers in 2013. This is a supremely ambitious goal considering it wants to turn an average user acquisition rate of 36K per year into one of 820K in one year alone.

But Afarian isn’t fazed and brings up how the company once sold out 20k in $99 account inventory on something called “DNA Day.” “Once we can offer the service at $99 it means the average American will buy in,” she said.

That $299 was too pricey, according to Hobbs, but $99 might be just right. She said the $99 price point, which yes, is less than an iPhone, was the main factor in her decision to buy in. “23andMe is more ‘nice-to-know’ information rather than ‘need-to-know’ information. It’s nice to know your ancestry. It’s more of a need to know that you are predisposed genetically for a type of cancer, so that you may take precautionary measures,” she said, implying that the data given by 23andMe isn’t necessarily vital medical information, or actionable when it is. While 23andMe can give you indicators about certain disease risks, it doesn’t close the loop, as in tell you what to do to prevent these diseases.

“Its [utility] depends on your genetic data,” said Afarian when I asked her about the usefulness of the product. “If you’ve got a Factor 5 that puts you at risk for clotting, you might want to invest in anti-clotting socks. [And] there’s always something about themselves that people didn’t know.”

Hobbs said eventually that she wouldn’t buy it, but only because she was looking into more exact lineage information for her little girl, and you need a Y chromosome in all DNA tests to show paternal lineage. Afarian also countered this hesitation, saying that what makes 23andMe unique is that it’s not only looking at just your Y or your mitochondrial DNA, but also your autosomal DNA, which does show some patrilineal information for females who lack that precious Y.

While still sort of a novelty, the potential for 23andMe goes beyond lineage and hopefully that extra $50 million will go further than keeping the price low and into research. The company hopes that a million users will result in a giant database of 23andWe genetic info that can be used to spot trends, like which genes mean a higher risk of diabetes/cancer, etc. Which is great if it happens but for now remains a pipe dream for 23andMe/We.

However, beyond Hobbs’ rejection, I’ve already got four TechCrunch staffers either on it already or planning to buy it. “I would use this at its new price point, and I’m a fucking cheapo,” our health and education expert Rip Empson told me on Skype.