Material Wrld, a fashion startup that’s both a peer-to-peer e-commerce marketplace for fashionistas and a fashion-focused photo sharing platform, is today announcing that it closed its seed round of $780,000 in funding, led by Great Oaks VC. That, of course, is the same investor that previously backed other well-known e-commerce startups like Modcloth and Bonobos, for example.

That NY fashion brand appears to be Steve Alan, according to Material Wrld’s Angel List page, where the CEO is listed as an investor. The Japanese CEO remains undisclosed.

Rie Yano and Jie Zheng, who met while in grad school at Harvard, started the site. Both previously worked in the fashion industry – Yano in digital media marketing at Coach and Zheng at Ralph Lauren, where she launched its first international e-commerce site. Zheng more recently was found at J Crew.

According to Yano, the inspiration for what became Material Wrld was based on their previous experience, as well as trends they saw impacting their industry. “What we were really excited about as we were working in the industry is that there was so much change happening with the way that fashion brands interact with their customers, and how people who love fashion are expressing their love for it. We saw that everyone was flocking to Instagram, to Pinterest, to Tumblr – people were essentially ‘humble bragging’ about their favorite looks and their favorite purchases,” says Yano.

“While we saw all that discovery and photo-sharing was happening in the space, we felt like there was nothing in the fashion resale market that really leveraged all the activity that happened between all the social content that was being exchanged between fashion-obsessed girls,” she explains.

Because  Material Wrld serves both sides of the fashion shopping experience, it has a unique angle. It’s a hybrid between a community-based photo-sharing site and e-commerce for high-end and contemporary brands. To some extent, Material Wrld competes with other fashion reselling marketplaces like Threadflip, Poshmark, Refashioner, Twice and others, as well as with larger marketplaces like eBay and Etsy. But it also competes with fashion photo-sharing sites like Kaleidoscope, Thre.ad and Snapette.

On Material Wrld, users can set up “closets” filled with photos of their favorite items, brands, and designers. With this feature, the company wanted to recreate that same sense of discovery that takes place in the offline world. That is, when browsing in a store, it’s not always about finding one specific item, it’s about happening upon something you fall in love with, Yano says. 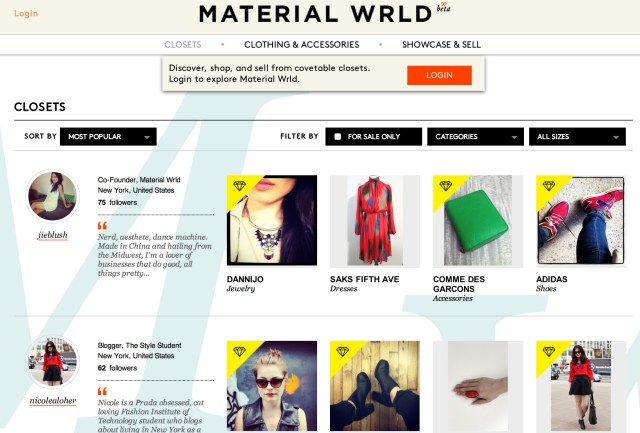 That being said, as the company moves into the fashion commerce vertical more fully, it’s beginning to introduce features to help consumers search for their interests. Today, for example, the company added new search functionality that allows shoppers to search by category or brand.

The seed funding comes early in Material Wrld’s product development. Today, the founders are the only full-time crew, having worked with a network of developers, designers and other creatives they knew from their earlier industry days. With the financing, the plan is to bring those jobs in-house now that they’ve settled into their new offices, which also conveniently house their own photo studio for fashion shoots.

Early next year, Material Wrld plans to publicly launch its platform and mobile app. The service has been in beta since August, following two major trials of its e-commerce functionality. The first, in April, focused on NY tastemakers, like “the Man Repeller,” Leandra Medine, who used social media to post about their Material Wrld closets. Yano says that first effort allowed them to capture 6,000 emails, and more than one-third of the items listed were sold. What was also surprising was that over a third of the traffic came from outside the U.S. To test international interest, Material Wrld’s second e-commerce trial in May offered shipping outside the U.S, and found that around 20 percent of the items purchased were by non-U.S. customers.

Yano declined to provide revenue or sales figures, saying that the focus has been primarily on building up the community side of the business, and that today, a little over 50 percent of the items on the site are in users’ closets, not yet for sale. Some of those may include brands that aren’t high-end, as Material Wrld doesn’t want to limit people from expressing their real style. However, when the e-commerce site launches publicly, it will come with a list of brands that can and cannot be sold, as reselling H&M or Gap, for example, would lead to a poor user experience in terms of quality, Yano explains. But the selling should come soon enough – fashion is a fickle business; today’s must-haves are tomorrow’s discards. Material Wrld wants to be home to both.

Today, the site has over 50,000 visitors (35,000 uniques), nearly 8,000 registered users, and has tripled the number of closets featured on the site since August. Users upload an average of 10 items each, Yano says. Despite the current focus on U.S. sellers, more than a third of the traffic comes from outside of the U.S., which is why Material Wrld will add international seller functionalities just after its official launch.