Wordnik is becoming more than an online dictionary today with the open beta launch of Related Content by Wordnik, which web publishers can install on their sites — when someone reaches the end of a page, Wordnik will recommend other pages that they might want to check out.

The company seems to be coming rather late to this market, since Outbrain, for example, has been doing content recommendation for years. At the same time, not everyone thinks the problem has been solved — in fact, tech journalist Ryan Singel recently left Wired to run his startup Contextly, whose products include content recommendation widgets.

CEO Tony Tam argued that Wordnik’s key differentiator is the technology underlying both the dictionary and the new Related Content product, which is focused on “what words mean.” The company already built technology to search the web and find relevant sentences illustrating the meaning of new words, and that same technology can help it deliver relevant content recommendations, he said

To deliver those recommendations, Wordnik looks at a page’s tags, title, categories, and body text, then finds other pages with similar content. Those pages can come from the same publisher, or they might be on other sites in the Wordnik network. 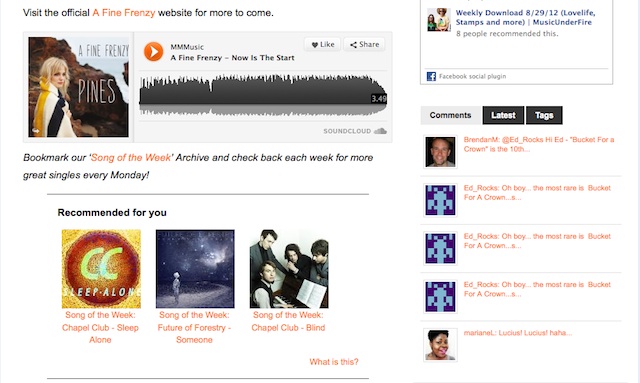 And even though it’s only launching the open beta now, Wordnik has already added Related Content to more than 1,000 blogs, and it’s seeing clickthrough rates of up to 10 percent. The launch press release quotes Ari Cox, publisher of Sub5Zero, as saying, “Wordnik has succeeded for us where other content delivery services have failed.”

Related Content by Wordnik is available for free, and can be installed as a WordPress plugin or a snippet of JavaScript code. Tam also emphasized the product’s speed — it shouldn’t slow page loading time, because the content is indexed externally and delivered asynchronously. And publishers get weekly reports about the product’s performance.

Wordnik founder Erin McKean, who was formerly the editor for American dictionaries at Oxford University Press, said she’s “really excited to help people in a way that’s not limited to alphabetical order.” And even though this is the company’s first big non-dictionary product, it sounds like Wordnik has plans for more.

“We want to be helpful to people at every scale,” McKean said. “At Wordnik.com, that scale is one word. With Related Content, it’s one blog post. And we can expand from there.”