We told you about Matt Galligan’s news app for iOS, Circa, a few months ago. Basically, it breaks down “stories” into more consumable chunks so that you can follow something as it happens. It was particularly useful during the elections, as the narrative on who would become the next President changed almost every single second.

Today, Circa is announcing the addition of a web view to its offerings, to support the activity that’s going on inside of the app. Basically, you can now start reading a story on your iPad or iPhone and then pick it up on your desktop later. Additionally, you’ll be able to share the chunks of stories that you find interesting with your friends, and they don’t have to have the app to view it.

The mobile-app-first initiative has been prevalent in mobile lately, and I find it extremely interesting that Circa ramped up its efforts to get a web presence going sooner than later. The web is back. Well, it was never gone, really. 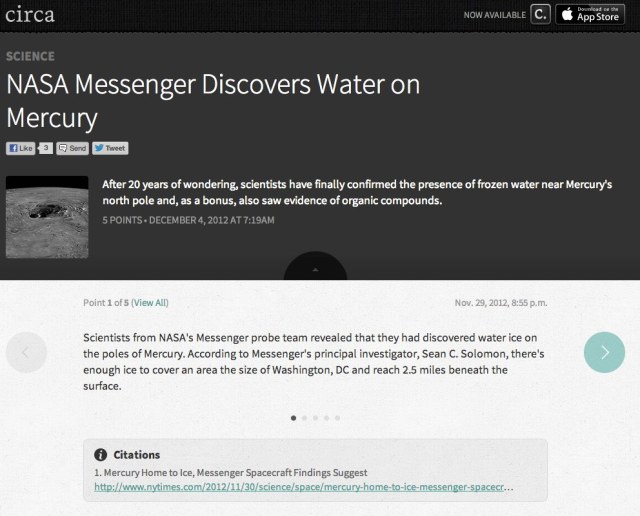 The design is quite elegant, much like the Circa app itself. You can hop through stories with keyboard shortcuts, Left and Right or J and K, or tap A or O to see an entire story or just the piece you’ve fallen on. This will also make sure that Circa news gets spread all over the Internet, a strategy that cannot be forgotten, especially when it comes to original content. This approach can also get serious traction going for the app, much like Instagram did in its early days with landing pages promoting the App Store download.

Sharing is quite simple from within the Circa app, just hit the share button, whether you’d like to share a chunk, or as Circa calls it, a “point”, or the entire story, then pick your network of choice: 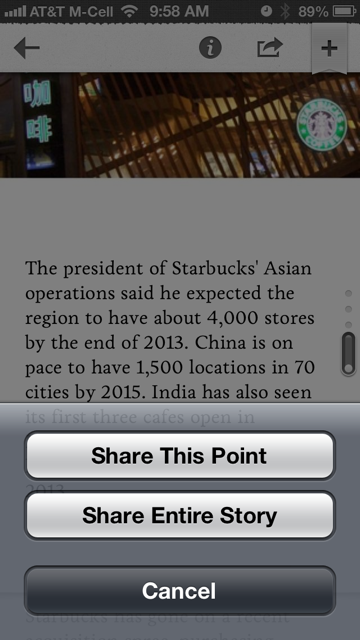 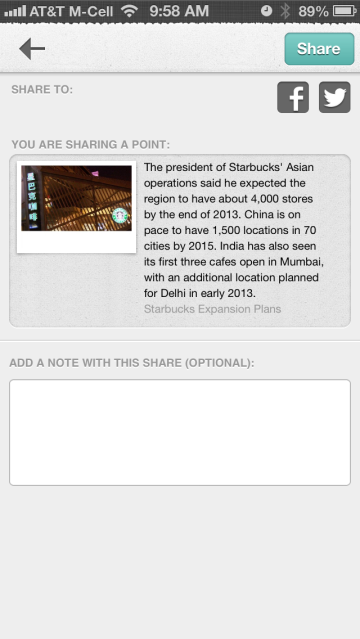 We spoke to Galligan today about the new web view, as well as how Circa has been evolving since its launch. Galligan didn’t get into user numbers with us, but you can see some pretty decent reviews, including five stars on the current version, on the App Store.

TechCrunch: What’s surprised you the most about running a “news room” since Circa’s launch?

Matt Galligan: What’s been the most interesting to watch has been when a new story breaks. While we don’t have all of our writers within our SF offices, we do have a couple that come in from time to time. Watching them react and collaborate around a breaking story is really fascinating. It’s fun to watch the fact checking, collaborative writing, and more all while considering brevity and speed.

TechCrunch: What’s the feedback been like. Are readers asking for more functionality? 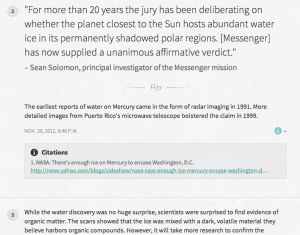 Matt Galligan: Readers love the completeness of the functionality as it’s seen today. Some are looking for more things to read, especially in categories like tech and business which we’re quickly making our way towards. I take the “I want more to read” feedback that they already love the app and all we need to do for them is write more – that’s something powerful. The most common functionality request was sharing by email, which we’re adding in the next version. That one didn’t surprise me much.

The second largest one is search. Readers want to be able to seek out content on their own, and that’s absolutely something we should allow. Search is easy to implement poorly, but incredibly hard to implement perfectly. We’re going to strive for the latter.

TechCrunch: Does this move to web mean that the app might end up being either a starting point or end point (on the go) with catchup happening in a browser?

Matt Galligan: I see it as an ecosystem. It all depends on where the reader discovers the story for the first time. If it’s within our app, the likelihood is that they think it’s interesting and thus share it to their networks. If it’s on the web, it’s probably because someone shared the story and they want to give it a read and possibly follow it. Our web view is a great way to introduce newcomers to the Circa format and application in hopes that they’ll give us a shot on their phones. 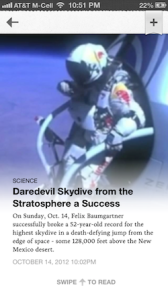 TechCrunch: What have your most popular and most followed stories since launch?

Matt Galligan: By far the most popular coverage and followed stories had to do with Hurricane Sandy. While plenty of major publications were doing things like this, we had one way to follow the coverage – a single button. We did our best to help our readers find the most important information surrounding the Hurricane, and if it was affecting them how they could find help. Our East Coast editors in NYC were right there working all the way up until the power went out to bring the best coverage.

While it doesn’t surprise me that Sandy has been our most followed story, what’s interesting to me is just how much the follow feature shined during that scenario. It was a breaking story without much to go on just yet. One follow tap meant that you were getting push notifications of each granular update surrounding the hurricane. That was powerful.

Matt Galligan: We’ve got an update coming soon that’s going to add a nice visual refresh to clean a lot of our current design up, as well as some new sharing functionality. Beyond that we’re tightening up the user experience – this will include refresh performance speed, feedback to the user on what is refreshing and when, etc. Overall this release was designed to get us to the best possible experience before the year is out.

Into next year we’re looking to add lots of great new functionality – expanded functionality within points, a customized “front page”, more features for following stories, and obviously search. We’re also actively working on getting our Android app out there, and after that iPad. 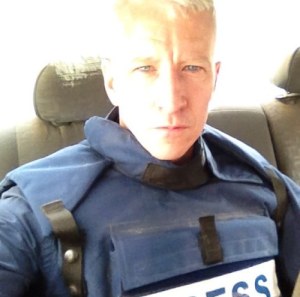 TechCrunch: Any chance of guest editors, writers or curators? Could we see, say an “Anderson Cooper” taking over a section of Circa for the day?

Matt Galligan: That’s something I haven’t really thought of before. It’s interesting for sure, but a lot of times people like to hear a voice from a particular individual and seeing as how our format is focused on the “facts” I’m not sure the two would add up too much. Along those lines, another important thing we’ve discovered is that our lack of bylines really does increase the overall quality of the work because each individual editor is more concerned with the whole of the work within Circa rather than their own contributions.

TechCrunch: What was your web philosophy, with the design. It’s pretty bold and fresh.

Matt Galligan: Just as we designed a native experience for mobile, we wanted our web experience to feel native to that platform. We wanted it to be easy to navigate and engaging, but make sure that we didn’t lose the essence of what makes Circa great. Functionality wise, we went with a responsive approach so that no matter the device or screen size you’re viewing the story on, it will be perfectly formatted.

In addition to these new web views, Circa has launched some category-specific Twitter accounts to help signal people when there are new stories and updates. This is a nice addition to the functionality that’s already available in the app. It starts with @CircaNews, and will evolve from there, Galligan tells us.

Circa is doing something very different, evolving and expanding the way we consume news. By no means is this a slam-dunk premise, and it can be difficult to explain to those who don’t consume a lot of news. I do honestly see this as a platform that could evolve into something that will be copied and replicated, by say, a CNN or FOX News. People like to consume on the fly, in chunks. They don’t like to read stagnant articles that are incomplete, that’s why we update our stories and link to other pieces here at TechCrunch. You should have the latest information, always.

As we reported earlier today, news aggregation service Prismatic just announced a $15M round of funding, so it’s safe to say that this space is getting extremely warm. The two apps are different in many ways, but both have a human touch on the aggregation, rather than just a robotic production line to serve up news. On the Prismatic news, Galligan had this to share:

I’m personally a big fan of Prismatic. They solve a different problem – discovery of interesting content relevant to you. But for the space, it’s huge. It means that there’s a strong likelihood of more investment coming into the news space because investors may realize that it’s a massive part of peoples’ lives and more innovation is deserved. This raise bodes well for everyone in the news space.

For some, reading a “static” story is what they like, and I get that. Again, someone has to push the envelope, and Circa is doing just that. Since I personally get my news from a variety of places, I’ll be interested to see if Circa ever introduces a Sports section, because that’s the bite-sized themed information I’m looking for when I’m not working. Basically, the lack of categories is a drawback for some at the moment.

If you missed it, have a look at our talk about Circa’s role in this year’s election coverage: