Instagram co-founder and CEO Kevin Systrom sat down with CrunchFund’s MG Siegler at LeWeb Paris 2012 today to discuss the company’s status after its acquisition by Facebook. According to Systrom, the deal allowed Instagram to focus more on developing the app and grow faster. At the same time, though, he also acknowledged that Facebook is still trying to figure out how to really create value out of the $1 billion Instagram acquisition.

Before the acquisition, after all, Instagram never had to worry about making money, as it sold very early in its history. Now, however, Facebook is apparently still trying to figure out how to best make use of Instagram inside the company.

Systrom also noted how much the company is now integrated with the overall organization at Facebook. While he acknowledged that there are always issues with any merger, he thinks the acquisition has gone very well for the company so far. At the time of the acquisition, Instagram had 27 million users. Today, it has well over 100 million. 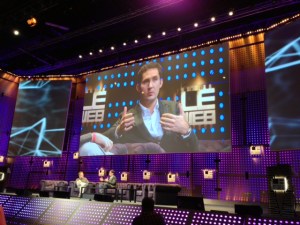 As for how things are going at Instagram right now, Systrom said that “it’s actually going really, really well.” He noted that many users were anxious about what would happen after Facebook acquired the company. Instead of making things harder, though, Facebook is enabling Instagram to grow faster and develop new products.

Instead of just having a few developers, Instagram now has 25 developers. “By the end of the year, we will have doubled our team,” he said. He also said that none of the old Instagram developers have left the company.

Siegler also asked him if Facebook was doing anything to promote the company, but there, too, the two companies still have a few things to figure out. Systrom noted that he doesn’t quite understand how Facebook’s news feed filtering mechanism works, either.