At LeWeb Paris this morning, Nest Labs‘ Founder and CEO Tony Fadell took the stage with the Iliad Group’s founder Xavier Niel to talk about his advanced thermostat and the Internet of Things.

Fadell noted that, in the U.S., more than 10 million thermostats are sold every year. When he built his own home, Fadell noticed that nobody had innovated on thermostat for years, despite the fact that they control almost half of the energy used every year. 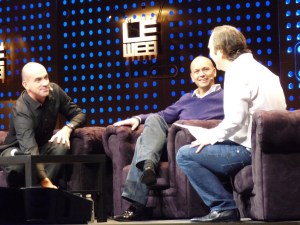 Asked about how he went from designing the iPad to a thermostat, he argued that’s what he learned in the process at Apple. Steve Jobs, he said, taught him that “every consumer touch point is extremely powerful,” including the boxing, the retail experience and the customer support. The product experience, that was such a focus for Apple, is something he also wanted to bring to Nest.

Talking about startups, Fadell noted that it’s about being fast, stealthy and being ready when people are ready to buy it. “Keep it special, keep it in-house,” he said. “Secrecy keeps people more exited when it comes out, especially when it comes to thermostats.”

Fadell also talked a bit about his experience at Philips before joining Apple. At Philips, he said, the depressing thing for many engineers was that many products never made it to market. At Apple (or at a startup), on the other hand, engineers know that things will ship.

Nest And The Internet Of Things

As for Nest and the Internet of Things, the topic of this year’s LeWeb, Fadell said that “we will have an Internet of Things, but if you think about it, we had computers in the 40s, 50s and 60s, and it took many years before they could interconnect. For machines to connect and for that to really work, it will take a few years. Give it five to eight years – maybe 10, and things will have improved quite a bit by then.”

All the sensors – the Nest has five – allow startups to gather large amounts of data today. Nest uses some of this data to automatically cool your home when you’re away, for example. By gathering all of this data, Nest managed to improve its algorithms because it learned more about the people who used the units. “Each day,” he said, “is kind of like running a field test.” You can go to this whole new level of learning thanks to the Internet of Things.

Coming Next For Nest: France And The UK 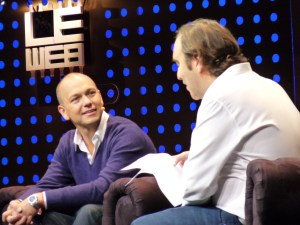 As for growth opportunities, Fadell noted that the company just started selling in Canada, but that it’s already seeing users around the world. He also said that the company plans to come to France and the UK as soon as possible, though he didn’t announce any launch plans at this time.

He also talked a bit about international expansion for startups in general. In his view, startups have to be “very methodical and think about their steps and true differentiation” when they move to a new market like Europe. To really go into retail and marketing, you need to have good partnerships and relations.

Fadell also had a word of warning for small hardware startups: in his view, it’s not as easy as it looks. Founders who want to get into this business should spend a few years working with their idols. There is a reason why hardware is called “hardware,” he said. It’s hard to do. Kickstarter allows entrepreneurs to find an audience for crazy ideas, but it took a team of over 70 engineers to make the Nest. Kickstarter lets you figure out that you can find an audience, but after that, you need to go to work with professionals to get the product out.

To make an Apple-class product, it takes really big backing in his view. If you want to fund somebody’s hobby, Kickstarter is great, but if you want to develop a mass product, you need more backing and experience.