ThisLife announced the launch of its online photo storage, management, and sharing service at Amazon re: Invent last week. The service, which raised $2.75 million from an impressive group of investors in June, is obviously not the first company to try to solve online photo storage, organization, and sharing, but it’s definitely one of the slickest ones I’ve seen in a long time. It’s also one of the first startups to use Amazon’s new Glacier data-archiving service in production, something that helps the company keep its prices down.

The service, which was founded in 2010, offers the usual features you would expect from an online photo service, but as the founders, husband-and-wife team Matt and Andrea Johnson, told me earlier this week, they decided to take a very different approach from the usual photo-sharing service. Instead of putting the emphasis on sharing, they realized that most people also want to upload all of their photos and find a safe spot for them. In addition, they decided to ensure that the service can help its users organize their photos without too much hassle. 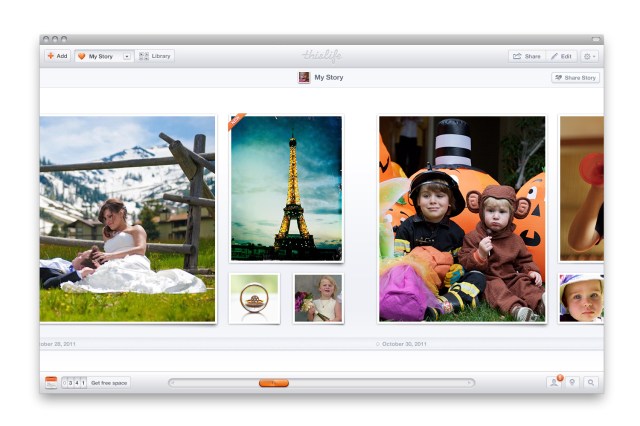 ThisLife lets you import your photos from most of the popular online photo-sharing sites (Facebook, Instagram, Picasa, Shutterfly, Flickr, Twitter and SmugMug), but it also comes with a desktop uploader (Mac and Windows) for transferring your iPhoto galleries and uploading folders or individual files. If you decide to connect your account to other online photo services, ThisLife will also regularly import your images from there to make sure they are stored in a safe spot.

Once uploaded, the service displays your images on a beautiful timeline that scrolls horizontally. In addition, you can also organize your photos into individual “stories” with just a few clicks (and the team is working on making this even easier and more intuitive). You can, of course, also share these stories and individual pictures on Facebook, Twitter or by email, but by default, everything you do on the service remains private.

One of the service’s coolest features is its proprietary deduplication algorithm. As Matt Johnson told me, this algorithm always gives preference to the file with the highest resolution; it worked flawlessly in my own tests. The service also offers a powerful and easy-to-use facial-recognition tool that makes it easier to tag people in your photos (and which can get names and other data from your Facebook account if you connect the two).

The service would be worth a look just because of its design and features alone, but what also makes it stand out is its pricing. As the Johnson’s noted when I talked to them at re: Invent, storage pricing is now so low that it only makes sense to develop pricing around features instead of capacity. Because it uses Amazon Glacier to store your original images and only uses Amazon’s more expensive S3 storage solution to hold your thumbnails and low-res images, ThisLife lets you store 25,000 photos (or 100GB) for just $3 per month in its Icebox accounts. The Icebox account doesn’t come with some of the more sophisticated features like deduplication, facial recognition, and the ability to create stories, but it does offer a good solution for somebody who is just looking to put their images in a safe spot. A full account, the so-called Super Box, costs $6 per month and also lets you store up to 25,000 photos or 100GB. Users who need more space just pay another $3 or $6 for the next 25,000 images.