A year is a long time, especially in the technology world. But it’s almost Crunchies time again.

The Crunchies are a mix of the MTV Music Awards and the Oscars…but for tech innovation. Basically, a dream for those who really care about pushing the needle. (you can buy tickets now). It keeps getting better.

I took some time to speak with three companies that won huge at last year’s Crunchies – Evernote, Grindr and Peixe Urbano. Basically, three companies that couldn’t be more different if they tried. I asked them a series of questions about how The Crunchies impacted them personally, professionally and from a product perspective. I think you’ll enjoy their answers and thoughts.

On the overall “Crunchies Experience,” Evernote’s CEO Phil Libin told us this:

My entire management philosophy was shaped by the Crunchies, or at least by the Crunchies Trophy: climb over old obstacles, smash things, eschew pants. I don’t always live up to every part of this credo, but I try.

All business, we love it. Grindr’s Founder and CEO, Joel Simkhai, gave us more of an idea of how the whole spectacle felt:

We’ve always been big fans of TechCrunch – here at the office, it’s our go-to destination for what’s going on in the tech world. It was an honor to simply have been nominated by a source that we respect and read daily. Then, to actually have won the Crunchie – especially in TechCrunch’s brand-new location-based apps awards category – was amazing. And as for the awards show itself, it was truly amazing to be in a room with all the legends and people whom I admire in the tech industry. And obviously we had a lot of fun at the show and the party.

Legends, indeed. But these folks are from the Silicon Valley area. What about an international company that travelled a long way, like Peixe Urbano’s founders Alex Tabor, Julio Vasconcellos and Emerson Andrade: 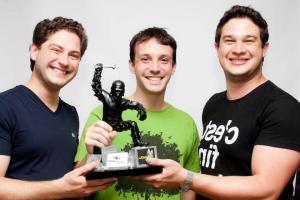 Being the first Latin American company to win the Crunchies Award for “Best International Startup” was an incredible recognition for all of the hard work up until that point as well as a source of motivation for us to do even more. It helped to put Peixe Urbano and the Brazilian startup scene on the map, and I hope it served as an incentive not only for our team but also for other entrepreneurs in Brazil and the rest of the region.

Three different companies with three very different, yet strikingly similar in some ways, experiences. Sweet. So that’s the “experience,” but how about what winning at The Crunchies did for them as a company and what it felt like when winning?

Libin went a little numb, perhaps, during wins and losses:

I don’t really remember the times we won, just blurry clapping and bright lights. I remember the moment I lost for “CEO of the Year” to Jeff Weiner and felt a big wave of relief that there was some sanity left in the world after all.

Oh, and he has a suggestion for those who are nominated: “For godsakes, wear something nice to the ceremony. Yes, yes, you’re s Silicon Valley hipster CEO, but you can still throw on a jacket.”

Fair enough. Grindr’s CEO told us what it felt like to win and “bring it home” to the office: 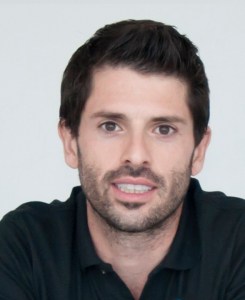 I was proud to bring the award back to the office, and I put it on prominent display near the front door so that people would see it right when they walk in. Also, after Grindr won the Crunchie, I received a lot of messages on Grindr from our users congratulating me on the win. It’s funny, though – they’re the ones who deserve to be congratulated. Our Grindr community, which now numbers 4.5 million users worldwide, was a huge factor in winning. They believed in our product, they spread the word about the Crunchies and voted – it’s because of them that we received the award. So their messages meant a lot to me, and I’m very grateful to them.

The Peixe Urbano situation was a bit different. Not better, but quite inspiring:

We received plenty of calls and emails. The news was covered by most major publications in Brazil as we were the first company in the country to win such an important international recognition. The governor of Rio de Janeiro, where Peixe Urbano is based, even set up an event in our honor to congratulate Peixe Urbano for this achievement in order to inspire other entrepreneurs in the state.

So there you have it, there’s a bit of background on what it feels like to be nominated, and win, a Crunchie. It sounds good to me, and being in the audience cheering everyone on felt good too. If you’re in the area, or feel like travelling, there’s really no excuse not to be here. I’ve heard from sources that this could be the best one yet.

Get your tickets now. Also, nominations end on December 6th, so get those in for your favorite companies and people right this very instant!

7:30pm – midnight – Awards Ceremony and After Party
A night of celebration with festive attire.

Tickets are on sale here. Be sure to act fast!

Our sponsors help make the Crunchies happen. If you are interested in learning more about sponsorship opportunities during the ceremony or after party, please contact sponsors@beta.techcrunch.com.

For press credentials, please fill out this request form and confirmations will be sent separately via email.

Check out additional coverage from our partners: GigaOM and VentureBeat.