The collision of fashion and digital technology feels like a very over-subscribed party already, what with the likes of Polyvore, Trendabl, Chicisimo, Fashism and Go Try It On all clamouring for access to that special consumer-spending VIP area (to name a select few). But the growth of mobile commerce looks certain to spawn yet more fashion/tech wannabes.

Amid the many approaches startups are taking in their quest to cash in on virtual window shopping, most are looking at mobile as a vital piece of the puzzle. Many are also looking to capitalise on the power of consumer-driven social media marketing as a selling point for the brands involved. Others are focusing on location to bring physical shops into the digital loop — such as Shopkick, which rewards consumers for walking into stores, using proprietary technology to confirm a user’s phone is inside its walls, thereby linking the physical shop with the individual mobile-wielding shopper.

Tapestry, the latest contender in this space, is aiming to connect a shopper’s digital identity with the physical products in the store they’re in via (free) Android and iOS smartphone apps. The Tapestry apps have been created by a U.K. startup of the same name* built by a team from digital agency Guided. But instead of angling towards location check-ins, it’s focusing on product barcode-scanning with a little NFC thrown in — to encourage consumers to build up a virtual collection (a ‘tapestry’ — aka a visual wish-list) of items they might like to buy in future which are (conveniently) linked to the retailer’s ecommerce database.

As well as creating a personalised mobile shopping channel on the user’s phone, the system provides the retailer with data about the shopper’s tastes. 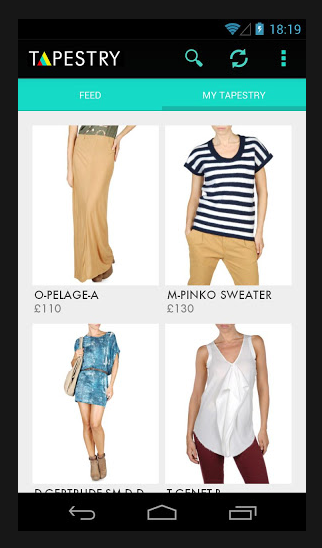 Tapestry also gives retailers scope to throw rewards/discounts into the mix to encourage consumers to add more products to their virtual collection and/or chatter about them on social media.

On the one hand it links content & promotions directly to physical products via a consumer’s mobile. On the other hand it links all physical items in store to the retailer’s ecommerce site, re-shaping the retail experience both in and out of store.

Tapestry founder, Sam Reid, argues there are some clear benefits for retailers of adopting the Tapestry model. “Brands spend a lot of time and resource in making and servicing online content to help sell their products. But it’s not easily accessible in store in a cost-effective way. Tapestry simply joins the dots and makes their hard work, work harder,” he says. “Also by adding an item to your Tapestry, you are saying to the brand that you want to know more and that thing. So it’s a complicit relationship based on relevance.
“Finally through digital watermarking there’s a way to make media spend work harder too by increasing footfall in a measurable way.”

Consumers add items to their tapestry either by scanning the existing shop barcodes with their phone — barcodes being a low-cost option for retailers to link to the system, and a more accessible option for consumers as they don’t need to own NFC-enabled phone to add items, just the app — or by touching their phone to NFC stickers that the retailer can create for individual products.

The process of linking the shop’s stock to digital content displayed in the app — such as product photos, but also item-specific info such as sizing, plus additional related content such as reviews and catwalk videos — may sound labour intensive from the retailer’s point of view but Reid claims the process has been “very much designed with the retailer in mind and simplicity of scale”.

Retailers add items to Tapestry’s database by uploading digital info from the shop’s product inventory to Tapestry’s cloud platform (via its CMS). “Each time they have something new it needs to go online,” he says. “We just take the same information. There are some bottlenecks, but that’s to be expected with a new process.”

Tapestry is currently being trialled by clothes retailer, Diesel, at its Westfield, Shepherd’s Bush U.K. store — with the one-month pilot scheduled to run until December 21 — so it very much remains to be seen how well it performs in the high street, and how keen shoppers are on the scanning model. Reid says the Tapestry concept developed out of a project started two years ago involving the London College of Fashion and Bodymetrics, (yet) another fashion-tech startup. A proof of concept was previously trialled at London department store Selfridges.

After the current trial, Reid says Tapestry will be focusing on signing up more retailers. “[We] are in current talks with a variety of global brands,” he says. “The response has been very positive. We are also working with some consortia partners (who are more core tech) to go for a new funding call.”

When it comes to funding, he describes money raised to-date as “relatively nominal” — with a government research grant from the Technology Strategy Board funding the initial proof of concept. Beyond that, Diesel has part-funded the current trial, and Guided, which Reid owns, has invested “some money” too. “But it’s been relatively nominal so far,” he adds.

For the business model, Tapestry intends to charge retail brands a subscription to use its service based on the size of the retailer’s product inventory. It also plans to charge for digital watermarking of print media.

“We have investigated other routes (ie. percentage of sales),” says Reid. “But knowing how the retailers operate their P&Ls this makes the most sense /is the easiest for them to budget for.”

Below is Tapestry’s introduction video explaining how its system works

*NB: not to be confused with other startups named Tapestry such as this one, or indeed Betaworks’ Tapestry