Whether or not one believes Khan Academy is helping to reinvent education, it’s hard to dispute the fact that Khan (and now his team) are an educational video-producing machine, or that the platform continues to diversify. In part, that started with the release of its iPad app in March. This week, Khan Academy brought its 3,600 videos to the iPhone.

This means that the company’s learning library is now accessible on the web, tablets and the iPhone and will likely be showing up on Android in the not so distant future. It may not seem particularly shocking given the exploding popularity of mobile, but it does seem notable when put in context.

Sal Khan started out creating tutorials on Yahoo’s Doodle Pad to help his cousin do her math homework. When other family members began asking for help, he posted them on YouTube. Fast forward to the present and Khan has gone on to create some 3,600 videos, which collectively have been viewed over 210 million times. Along the way, his instructional library became Khan Academy and gained support from the Doerrs, Bill Gates and many others, and Khan himself became the “teacher of the world” and the “Messiah of Math.”

The platform has done wonders for the dialogue around learning, and it’s true that its founder is doing his part to re-imagine what modern education should be. Of course, it’s also true that the media hype partially obscured some legitimate questions about the quality of Khan’s teaching, his pedagogy and whether or not video lectures really add up to Education 2.0. 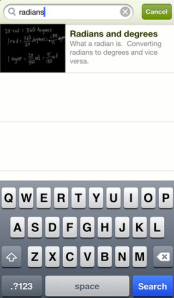 Nonetheless, the online learning academy continues to press on. As part of the latest update to its iPad app, the company added support for the iPhone, which now allows users to access its library of videos on the go. Unlike Khan’s iPad and web apps, the new app doesn’t include the ability to download the videos so that they can be watched offline, subtitles, or track your progress through the academy and unlock achievements. Instead, the app simply allows you to watch videos.

This might make the app seem undercooked — and in a way it is — but it could actually be a smart move given the limited form factor. Stuffing the entire Khan Academy experience onto the iPhone’s screen likely would diminish the experience of its visualization tools, interactive transcriptions and some of its better gamification and progress-tracking features.

Nonetheless, by opening up the Khan experience to iPhone users, they can now access Khan’s instructional videos on the go, while on the bus or during long car rides — all of which is huge for students and fans of the educational platform.

It exposes a huge swath of potential learners to Khan’s 3,600 videos, which range from math and chemistry to physics and biology. While it may be old news to some, as Khan first leaked images of its new iPhone app over a week ago, it’s still a worthwhile addition to the lexicon and a sign that it’s continuing to push forward.