Things change everywhere, especially at startups. Sometimes, the people who start something aren’t the ones who end up “finishing” it, and that’s the case today with one very important person at Twitter. In a tweet, Twitter’s first designer, Vítor Lourenço, announced that he’s leaving the company after five years.

He took the opportunity to thank Ev Williams, one of its founders, for giving him a chance, and got a quick response. Now stop and think about how many people have gotten to see, and use, what he worked on for five years. Pretty cool, huh?

@vl Your contributions were immense. Thanks for all you did to move Twitter forward in a beautiful way. Good luck on what's next.

Some people will read too much into this as a sign that things are shifting in a bad way at Twitter. Since I’ve been around startups for so long, I’ve seen this type of attrition happen in real time. In fact, the five years that Lourenço spent at Twitter are quite impressive. Some folks are saying that Twitter is “pivoting,” good or bad, and that what we see today will not be what we see tomorrow. I tend to disagree with that line of thinking, but losing your original designer is never easy. We’ve reached out to Twitter for comment.

During a 2009 interview, here’s what the young designer had to say about his work on one of the most popular consumer apps we’ve ever seen:

You’re best known for having worked on one of the largest websites in the world, Twitter. Can you tell us about the steps you took to transform this already simple website to the more elegant, intuitive style so many people have come to know and love?

I worked with Twitter’s engineering team to simplify the application UI even more, by following some of John Maeda’s simplicity concepts: shrink, hide and embody. Therefore, the application didn’t loose any of it’s features, but they were better grouped and incorporated on the site, by introducing a unified sidebar with a vertical tabbed navigation. In terms of visual design, we refined the typography, button styles and fixed spacing and grid inconsistencies. On the front-end technical layer, we introduced AJAX for posting the updates and switching tabs, while improving the site’s performance by grouping images using CSS sprites.

What will Lourenço do next? The sky is the limit, because he realized that simplicity is what real people want — not just geeks. Whether it’s an app, web service or something on a piece of paper, it’s not worth doing if it’s not easy enough for everyone to grasp.

In his current Twitter bio, San Francisco based Lourenço offers no hints as to his next move. I’m sure he’ll keep us updated…on Twitter.

I was the first designer at Twitter, where over 5 years, I helped change the way people communicate. Now figuring out what’s next. 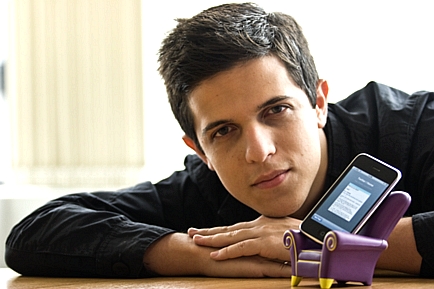 People come, people go, but our work and passion stand up for a lifetime. Boy would I like to see him land at Medium where simplicity rules.

[Photo credit: This and that.]