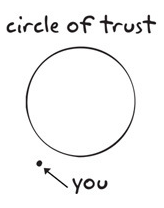 PRWeb has just put out a press release about the fraudulent press release it released (and we erroneously reported) this morning. Ha.

PRWeb transmitted a press release for ICOA that we have since learned was fraudulent. The release was not issued or authorized by ICOA. Vocus reviews all press releases and follows an internal process designed to maintain the integrity of the releases we send out every day. Even with reasonable safeguards identity theft occurs, on occasion, across all of the major wire services. We have removed the fraudulent release and turned the matter over to the proper authorities for further investigation.

WHAT? You mean that something that was posted on a website, on the Internet, was untrue? Well, hells bells PRWeb. How am I supposed to believe anything I read on Twitter from now on? How am I supposed to believe this release even? How do I know this is you, Frank Strong, blogging for PRWeb, and not someone trying to pump a penny stock from ‘Aruba!’?

I guess I’ll just have to stop reading text online in the first place. Or maybe switch from reading TechCrunch to reading some of our competitors who would never report a story straight from a press release or just re-report news from another publication, because they are the recipients of a constant stream of manna from News Heaven. And are immortal and immune to failure.

Anyways, lest it seem that I am being facetious about a serious issue here, being wrong sucks. It burns and it is terrifying. It haunts you at night and doesn’t let you sleep. Eventually, if you keep at it long enough, it gives you heart disease.

Seriously, every time we in the business of Truth have to [Update: No] on a post we are defeated and mean to our friends and lovers and the checker at the grocery store for the rest of the day, and we are so so sorry. So no, you don’t get a TechCrunch rewrite on this one, PRWeb. Fool us once, shame on you …

Editor’s Note: We reached out to everyone ever involved with some aspect of this story via phone and email pre-publication and have not yet heard back. We’ll [Update] this post continuously once we do. Because that is totally humanly possible.