Dexetra, the company behind the Siri-like Android app Iris and the activity-tracking app Friday, is merging the two apps to work together more seamlessly on Android devices. Giving Siri a run for its money, Iris users can now search the data archive generated by the Friday app, following the recent updates to these mobile applications rolled out over the Thanksgiving holiday here in the U.S.

For those unfamiliar, Iris is one of many “personal assistant” type applications for Android – a space that has exploded since the launch of Apple’s Siri. Using voice control, Iris lets you perform common tasks like setting reminders, sending texts, playing music, asking about movie reviews and more. It can also serve up answers to other questions via its ChaCha integration. (Which caused a bit of controversy in the past, we should note.) 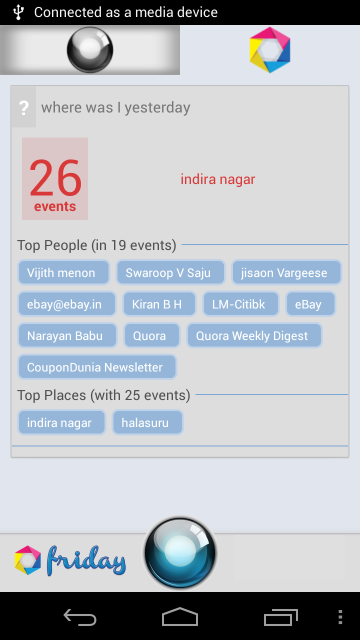 Meanwhile, the Friday application, launched earlier this year, is like the flip side to Iris. Where one might talk to Iris about future events (is there a sushi restaurant nearby? what movies are playing?), you can ask Friday about things that have already happened. The app records a history of your communications, including calls, texts, emails, and photos, as well as changes in the phone’s status and activity taking place on third-party services like Facebook, Foursquare and Twitter. That means you can ask Friday questions about things in the past, like “who called me Tuesday afternoon?” or “where was I when I last spoke to Jim?” for example.

However, until now, the two apps were standalone entities. If you wanted to look back in time, you used Friday. To ask questions or talk to a virtual assistant, you needed Iris. But with the update, you no longer have to think about which app contains the information you need. Friday can simply run in the background creating the personal journal of your life’s activities, and you can query against it using Iris.

Dexetra CEO Narayan Babu says that since Friday’s launch in April, over 100 million documents have been created by the app, and to date, Iris’s millions of users have asked over 250 million questions.

The company is now beta testing more “applets” – the optional, context-aware mini-programs that work with Friday. For example, an applet called “Trails” lets users create a travel diary where all your activities (photos, checkins, tweets, etc.) are plotted on a map. New applets will include a battery monitor and an alternative dialer. With the battery monitor, Friday could alert a user when the phone is low on juice and there’s a charger nearby, while the dialer app would show not recent calls or favorites, but those numbers you’re most likely to call, based on previous behavior and your current context. In short, these apps make your phone aware of its surroundings and own functions in a way that hasn’t really been possible before, then tie that data together with a virtual assistant interface.

Dexetra isn’t the only company thinking about how our personal devices can help us record our life’s activities. However, a recently revealed Apple patent indicates that it might also be looking into integrating some sort of event-tracking at the OS level in the future.