Walgreens is today updating its mobile applications to include the Aviary mobile SDK, which will offer photo-editing capabilities to all Walgreens’ mobile app users. In June, Amazon’s Jeff Bezos (through Bezos Expeditions) and others invested $6 million in photo-editing startup Aviary, and we outed Walgreens as the unnamed strategic investor in the matter. The retailer’s involvement was fairly easy to spot: an SEC filing showed a new board member, Abhi Dhar, CTO of Walgreens’ e-commerce division. Today we’re now seeing more of what that partnership has brought.

While Walgreens doesn’t provide numbers related to how many mobile app users it has, its app has in the past reached the number one position in the “Lifestyle” section on both iOS and Android, and it’s currently in the top 10 in that section in Apple’s App Store. It also has a brick-and-mortar footprint of over 7,900 locations across the U.S., where it can test this premise that consumers want hard copies of their photo-filtered, stickered, captioned pictures. 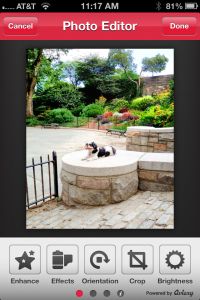 With today’s app updates, Walgreens mobile applications now include two SDKs: Aviary’s Mobile Photo Editing SDK and the Walgreen’s QuickPrint SDK, which allows any developer to add in-store print functionality in their own mobile app. The latter of these two was previously announced this summer, when Walgreens debuted its new developer portal to offer tools for integrating Walgreens’ in-store services into third-party mobile applications. Among the first to use the “print to Walgreens” functionality in their own photo apps were GroupShot, Kicksend, Pic Stitch, Pinweel, and StillShot.

At the time, Walgreens also announced it would partner with Aviary to help reach the startup’s 1,200 app developers and 8 million consumers in order to increase adoption of the “print to Walgreens” feature. According to Aviary CEO and founder Avi Muchnick, however, the plan isn’t just to bring the print feature to mobile app developers, but to Aviary’s partner web developers, too, by bundling the Walgreens printing functionality into its own SDKs. 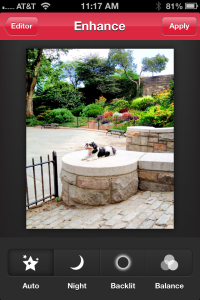 The company will first test the functionality in its own standalone application before pushing it out to the wider network, he adds, and the hope is that the app will be updated by year-end. “We have immediate plans to include Walgreens printing in our app,” he says. “The end result being we intend to offer Walgreens printing through our entire distribution network.” That network, says Muchnick, includes over 2,100 partners and over 20 million users.

But today’s big news is that Walgreens is now including Aviary photo-editing capabilities within its own apps, which were previously more focused on coupons and prescriptions. The updates will also include other features out in time for Black Friday, like exclusive offers, discounts, and a new sweepstakes, for example. Starting today, on both iOS and Android, Walgreens users will be able to access Aviary’s creative suite of editing tools, including photo filters, effects, stickers, captioning, retouching tools, clarity adjustment tools, and more. In the future, Aviary will expand upon the current selection of filters available at launch to include some which will only be available to select “partners.”

Yes, partners, plural. But who? Muchnick couldn’t confirm those details, but says that Aviary has “a few more exciting partnerships that are just around the corner.” When? “Soon.” We have our hopes up for an Aviary + Amazon Cloud Drive Photos partnership (after all, Bezos is a personal investor in Aviary), but that’s admittedly wishful thinking at this point – that Amazon Photos app is incredibly bare bones and could benefit from an expanded feature set, like what Aviary has to offer.