Storify is launching a redesigned website that puts search front and center.

The site — which allows you to create stories out of online content from Twitter, Facebook, YouTube, and Instagram — already included a search feature, but now the small search box at the top right of the home page has been enlarged, so that it becomes the obvious way to navigate the site. The search results have been changed, too, so that each item is ranked, as Storify puts it, “based on the resonance each media item has on our platform,” and so that the media elements of search result (photos, videos, and quotes) are displayed in a tile-based layout.

“Users were asking to search content on the site, both to discover stories, as well as find media for their own stories,” co-founder Burt Herman told me via email. “We wanted to show the media our users were collecting from the front page of the site directly, and also create a more engaging teaser for the stories inside. We think of it like a table of contents for a magazine where the best quotes and photos are there to draw you deeper.” 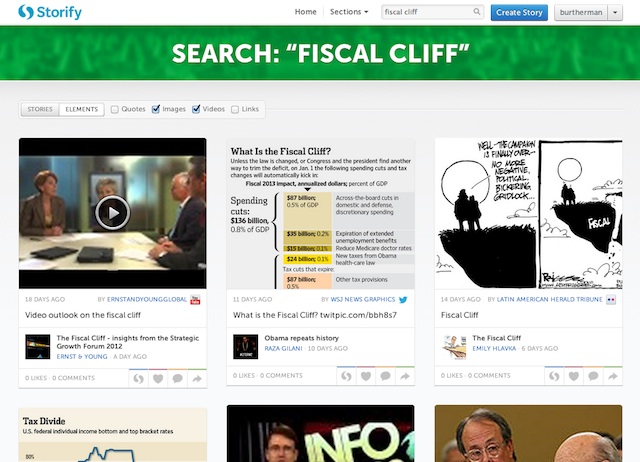 Herman added that the new search rankings should allow relevant content to show up regardless of the keywords or hashtags used. For example, he said that when Sohaib Athar (ReallyVirtual on Twitter) live-tweeted the Osama bin Laden operation, he didn’t used any hashtags (because the event’s significance and broader context weren’t clear while he was tweeting), but his tweets still show up in Storify’s Osama bin Laden results, because they were mentioned in many stories about the attack.

Another change that doesn’t really have anything to do with search: Users can now add a little more personality to their profile pages by uploading a big image that goes in the background, similar to the look of Facebook profiles.

Storify has seen 30 million story views in the past 30 days, which is up 30 percent from the previous month. Herman said that most of the traffic comes from stories embedded on other sites, but traffic to Storify.com is growing, and the redesign is another step in making the site an attractive destination in and of itself, both for readers and for “people writing stories to find great media to use.”