Yet another startup is wading into the crowded waters of music streaming today: Radical.FM, a web-based service that combines on-demand streaming and curated radio stations with a platform for artists to create and broadcast their own public playlists. But while companies like Pandora, Spotify and Rdio build out businesses based on advertising and subscription services, Radical.FM is trying something a little different: in the spirit of public radio, it’s pushing its catalog of 20 million tracks in a wholly-listener-supported model to fund its operations.

Radical.FM is founded by Thomas McAlevey, an American expat seasoned radio entrepreneur, who founded an FM station in Sweden, Bandit 105.5, “The Rock Home of Stockholm”, and sold it to RTL in the 1990s. He then started Tomsradio, an early effort in the Internet radio space. That was live from 2000 to 2003, and had 40,000 listeners at its peak.

Radical.FM is based around a catalog of 20 million tracks, IFPI-licensed music from all major recording labels, the company says. As for the listening options, there are essentially three: an on-demand streaming service where users can create and share playlists of music; a radio service where you can access curated radio stations complete with DJs commenting and shaping the playlists; and something called “RadCasts,” a further set of radio stations where independent artists can create and share playlists of their own music. The services are available online and via the mobile web, and have options for sharing built into them, either via playlists, through Facebook and Twitter sign-ins, and through an on-screen chatting service.

Although the plan is to take the service multinational, for now Radical.FM has only been turned on in full in Sweden — yes, Spotify’s backyard.

This isn’t a deliberate attempt to go after Spotify directly. It happens that Sweden is where McAlevey lives.

He points out that there are other advantages to launching first over there. “Sweden is a hotbed for streaming music services, a country full of early adopters, and it has a forward-thinking music industry,” he says. “It is a perfect place to ‘test run’ a game-changing new service like Radical.FM before we add the label-music aspect of Radical to the US and the world.”

“Taking on Spotify on their home turf is kind of fun, too,” he adds.

Radical.FM seems to be confident that listener support will be enough to run the service — and then some. Ten percent of all donations will be passed on to charity. “We believe that a corporation can do well while doing good. We believe everyone is entitled to enjoy great music, even the young and unemployed,” says McAlevey. “And we believe that users and artists will appreciate and support our noble efforts so that we can continue to be free and ad-free, worldwide, indefinitely.”

Radical.FM has a number of challenges ahead of it. They include whether the company will be able to attract consumers to its new platform — free or not. And once they are there, Radical.FM will have to convince them it’s worth staying, either to stream its catalog of on-demand tracks or to dip into its pre-programmed, DJ or indie-artist-led radio services. That’s before Radical.FM even sees whether it can remain financially viable on user contributions alone. Playing around with the beta version of the site (screenshot below), you come to appreciate what a major feat it is to develop a service that doesn’t have people guessing at what to do and just feels like second nature to use.

Still, in a world where digital listening is increasing and overall radio listening is in decline, and companies like Spotify still have yet to turn a profit, it’s as good a time as any to see whether alternative models like Radical.FM’s have a chance of coexisting with the rest of the mix. 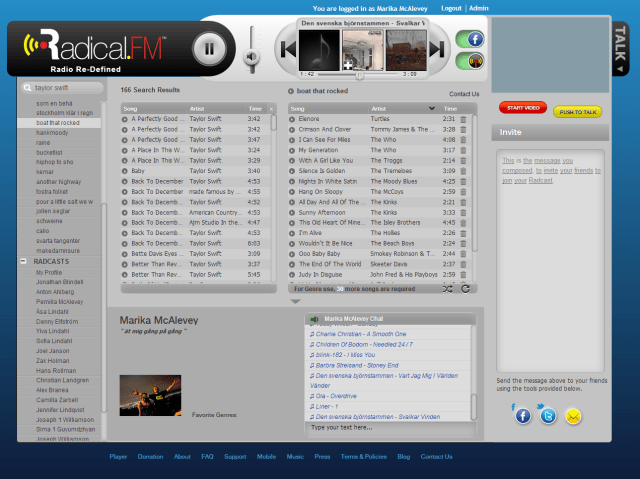