In the world of restaurant recommendations, the focus is squarely on social recommendations these days. Nara, which is launching its mobile apps for iOS and Android today, is taking a different approach. The service tries to learn your preferences and uses its own set of proprietary algorithms to give you personalized recommendations.

The company, which was founded in 2010 and raised a $4 million Series A round earlier this year, is also now expanding to more cities. With today’s launch, Nara now covers 22 cities in the U.S. and three in Canada, including New York, San Francisco, Portland, Austin, Las Vegas, Montreal, Vancouver and Toronto. 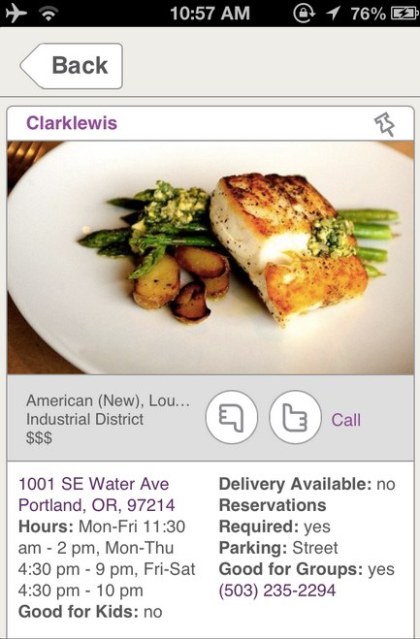 Recommendations in Nara are based on what the system has learned about you, but you can also search and filter through the service’s database to find restaurants based on cuisine and neighborhood. While there is no built-in social network on the service itself, Nara does pull in Foursquare tips to provide a bit more context for the restaurants it recommends. The mobile app is also integrated with OpenTable, so users can easily make reservations right from the app.

Nara previously launched a web-only beta version and as the company’s founder and CEO Thomas Copeman told me last week, the team used its experience from building the beta to focus on making the service fast and scalable, as well as to improve its systems for ingesting restaurant information from the web.

When I last talked to Copeman in June, the Nara team was pretty sure that it could scale its service and recommendations very quickly from beta to public launch, but it still took quite a bit of work to launch today’s set of mobile apps. In the long run, Nara also plans to launch on Windows Phone and other platforms.

What’s interesting about Nara is that the restaurant recommendations are just the tip of the iceberg when it comes to the company’s ambitions. The recommendation engine, which is based on what Nara calls Digital DNA, could be adapted to virtually any kind of product, from music to books and hotels.

Another interesting aspect of the service is that it has, for the most part, solved the cold-start problem that often vexes algorithm-based recommendation systems. Nara can’t look at your friends’ preferences to start learning about yours, after all (and the Nara team would argue that those social recommendations aren’t all that good anyway). To get you started then, Nara’s onboarding process asks you for your two favorite restaurants to seed the algorithm. In addition, Nara asks new users to look at a set of images and answer three questions about themselves by choosing the best pictures to represent them. After that, users can also use a traditional “thumbs up” and “thumbs down” gesture to teach the system more about their preferences.

Once the system has learned a bit more about you, it can also give you recommendations in other cities – something that’s often a problem for social recommendation systems, as your friends may not have rated very many restaurants outside of your hometown.