While smartphones are quickly becoming the center piece of our digital lives, much of what we do on our phones remains trapped on the device — something that’s particularly true of text messaging. So, beginning in 2011, ex-Googlers Maneesh Arora and Amit Sangani set out to develop a solution that would allow anyone and everyone to view and reply to text messages no matter what device they happen to be using.

After testing their idea as a Chrome extension and finding some promising early traction to the tune of 250K users in a few short months, the pair turned their attention to developing a native app in the hopes of reaching a broader, mobile audience. Because Apple doesn’t allow developers to touch SMS or voice information on the iPhone, Arora and Sangani decided to build an open, cross-platform equivalent of iMessage.

The result, which officially launched in June, was MightyText, an app that essentially allows any Android user to send and receive texts from virtually any device. Not surprisingly, by offering a solution that enables Android users to send SMS, MMS and make calls anytime, from anywhere, MightyText has grown quickly in the months following its launch. 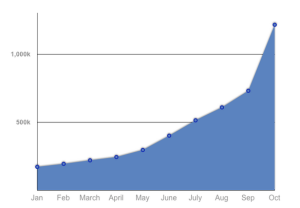 The founders today announced that MightyText has crossed the one million user mark, reaching 1.2 million users as of early November and is on pace to send four billion messages in its first year. Considering MightyText was hovering around 250K users in June, its user base has grown six-fold in just under five months.

To celebrate this early traction, MightyText is today launching its first tablet app in private beta, which lets users text from their tablet. (Users can get early access by signing up for the service on its home page.) Arora tells us that this has been the most-requested feature from its users over the past several months, especially as they’re beginning to see a serious uptick in the amount of people buying Nexus 7 and Kindle tablets and who are now beginning to use the tablets as their primary device.

In addition to its first tablet app, the startup is also debuting a new product called PowerView, which allows users to view all of their open SMS threads in one screen so that they don’t have to switch between conversation tabs or to their inbox. The product also brings a new UI view to the SMS thread layout, especially in juxtaposition with its standard left-nav-select-a-thread view, giving it a Pinterest-like feel.

Another cool new feature? Battery level sync. Users can see if their phone’s battery power is running low on their other devices and computers using MightyText. 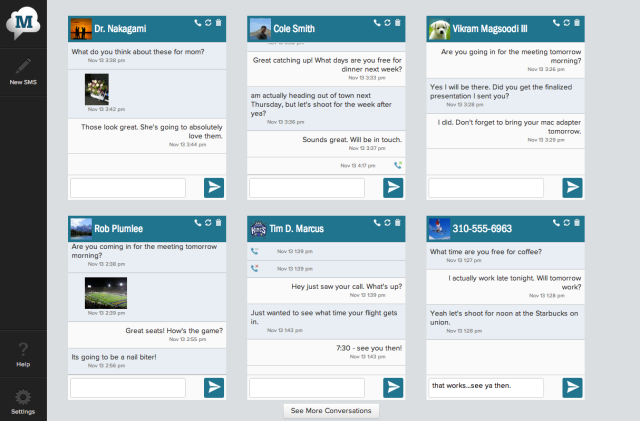 To put these new additions in context, beyond the ability for Android users to send and receive texts across platforms and devices, the real key to the service is that MightyText syncs with your existing Android phone number. This means that, unlike Google Voice and many other SMS apps, users don’t have to go out and get a new number to use the service — nor are they subject to geographical limitations (i.e. U.S.-only availability).

On the flip side, by essentially enabling remote access to your phone from any device, MightyText doesn’t incur the typical costs of SMS, which is a huge source of friction for SMS apps, especially early in the development process. There’s also an upside for carriers like Verizon and AT&T, which have become increasingly wary of losing messaging and data traffic to iMessage and services like WhatsApp.

If users send an SMS in a third-party app or by using data or WiFi, carriers don’t make any money. So, MightyText is hoping that, by keeping texts on the carrier’s network (as you get to keep your cell number), it can curry favor with the bigs, setting itself up as a potential partner down the road. 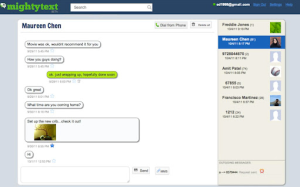 As to where the startup plans to go from here: Arora tells us that “SMS and voice is just the beginning for MightyText.” Because the service lives in the cloud via your browser, it already gives users the ability to organize their texts, picture messages and calls, automatically storing that data (and making it searchable) for as long as needed.

Leveraging this functionality, the co-founders want to eventually create an “iCloud for everyone.” Whether you capture content on your Android phone, iPad or computer, it should be everywhere and accessible at any time, Arora says. While Dropbox, Box and a number of others already offer similar capabilities, including sync and backup, the co-founders believe that these services are still missing the notification and “daily productivity piece.”

So, as our phones and mobile devices continue to play an increasingly leading role in our digital lives, “being able to quickly sync, store and cross-notify the ‘native captured content’ of cell phones — like SMS, calls, photos and contacts — is going to become increasingly essential to our mobile experience,” Arora concludes.

And, considering there are 300 million Android devices currently on the market and that seven trillion SMS messages are being sent every year across platforms, he just may be onto something.