HTC and Verizon’s brief presentation wrapped up not long ago, which can only mean one thing — nearly all the members of the press leapt from their seats and made a beeline for the demo units for some precious hands-on time.

Of all the things the DNA has going for it, I honestly didn’t expect its weight to be what jumped out at me first — it weighs in at under 5 ounces, which is a surprising change of pace for HTC. Longtime readers may know that I’m sort of a sucker for the reassuring weight that HTC’s smartphones tend to have, but credit where credit is due — that HTC managed to squeeze everything into such a light package is pretty impressive. What’s more, the DNA is a remarkably grippable little guy considering the fact that it sports a 5-inch display of all things. It’s just about as thick as Samsung’s Galaxy Note II phablet (which, if you’ll recall, sports an even bigger 5.5-inch panel), but manages to feel slimmer than it looks because of some smartly tapered edges.

For a device that was meant to bring Verizon’s Droid line “back to its roots,” the DNA is awfully conservative when it comes to design. Gone are the funky little ridges seen on devices like the HTC Rezound, as are the peculiar, almost topographical raised sections on the original two Droid Incredibles. Instead, the only bits of personality to be found here are the red-tinged grilles that run along the DNA’s left and right edges. They’re a handsome touch to be sure, but the design may otherwise be a tad too minimal for some. 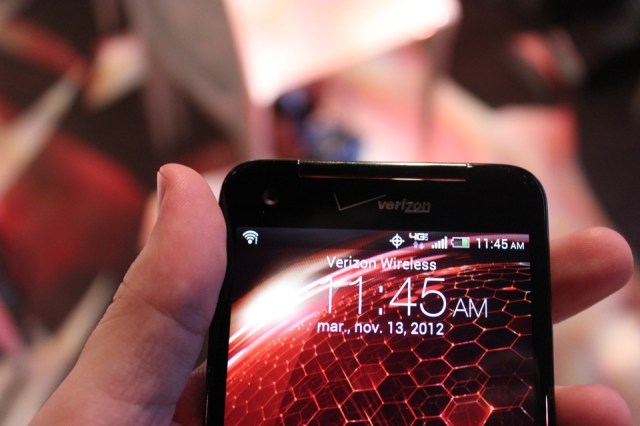 The Super LCD3 screen, as you would imagine, is pretty damn amazing. After taking off my glasses and getting right in there, I’m happy to report that it’s nearly impossible to pick out individual pixels. Verizon has a nasty (if understandable) tendency of loading their devices up with lurid red images and wallpapers, but firing up the browser and looking at other photos revealed vivid (but not oversaturated) colors and great viewing angles. Sure, the display can’t produce the sorts of deep, sumptuous blacks that an AMOLED panel can, but right now I’d gladly take the DNA’s screen over the Galaxy S III’s.

It’s always a little tough to get a concrete sense of performance with such a limited amount of hands-on time, but the DNA seemed plenty snappy thanks to its strong spec sheet and the buttery improvements found in Android 4.1 Jelly Bean. I couldn’t help but load up Quadrant onto the thing to get a feel for the sort of horsepower it has under the hood, and came away rather impressed — it consistently saw scores in the high 7,000s, while stock devices like the Galaxy S III and the HTC One X tend to top out in the mid-5,000s. In short, the DNA’s got game.

As undeniably solid as the device is, there are still more than few questions that can’t be answered just yet. The biggest in my mind is battery life — the DNA packs a sealed 2,020mAh, but the toll resulting from a huge, bright display and that Snapdragon S4 Pro chipset remains to be seen. Fear not, though — a more in-depth review of the device is in the works.