Google’s latest Nexus-branded hardware went on sale in Europe today. The Nexus 4 smartphone and Nexus 10 tablet were both due to be available today on the Play store, alongside the refreshed Nexus 7 tablet. But it appears that the newest Nexus hardware is selling out fast. Both versions of Nexus 4 are now listed as ‘coming soon’ on the Play Store in the U.K., and the 32GB version of the Nexus 10 tablet is also apparently no longer in stock. (Update: the Nexus 4 sold out within minutes — judging by various tweets on the topic — although many users are also complaining Play Store errors prevented them from bagging their intended Nexus.)

At the time of writing the 16GB Nexus 10 is still listed as ‘in stock’ in the U.K. store, while all versions of the Nexus 7 mini tablet are ‘in stock’. The Nexus 4 and Nexus 10 also went on sale in Australia earlier today — and have both now sold out, according to AusDroid. 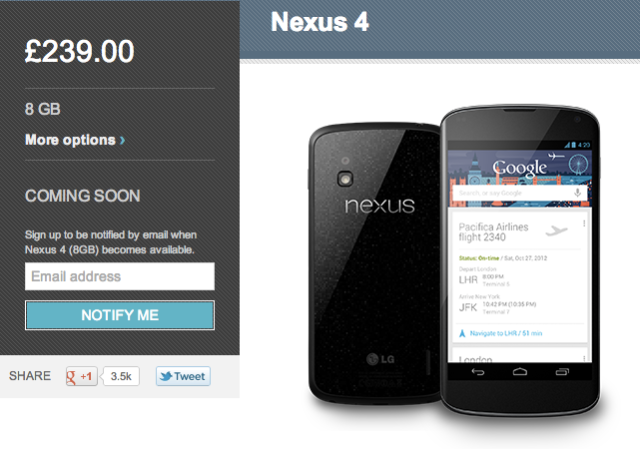 We’ve reached out to Google to confirm the sales situation in Europe and will update with any response. (Update: Google said it has nothing to share on Nexus sales figures at this time.) It’s unclear how much stock of the new Nexus devices Google has made available. It’s notable that the Nexus 7 mini tablet does not appear to have sold out in the U.K., in any of its flavours (16GB, 32GB, 32GB plus 3G) — despite being beefed up with more memory.

The Nexus 4 is made by LG, and — in addition to running the very latest iteration of Google’s Android OS, 4.2 Jelly Bean —  it packs a 4.7 inch display and a 1.5GHz quad-core chip. In the U.K. its price-tag starts at £240 for the 8GB version — which effectively means you’re getting a high-end 3G device for a mid-range price.