Cloud services are where the action is for enterprise IT companies right now, and Citrix, which bought the open source, cloud-computing platform Cloud.com for upwards of $200 million in 2011 (getting a killer domain name in the process), wants to be at the vanguard of that trend. It’s now preparing to launch a new service at the domain, which will simply be called “Cloud” (minus the dot-com). It has put up a placeholder at Cloud.com with a sign-up for “early access and pleasantly infrequent updates” for what it is describing as a “new Cloud on the horizon.”

It’s not clear at this point whether this will be a completely new product (one guess from TNW is a new home for Project Avalon), to compete against the likes of VMWare, Amazon, Oracle and Salesforce. On the other hand, it could simply be a relaunch of the services that existed at Cloud.com before the old page was taken down. The change was first brought to our attention by Fusible, which had a screenshot of how the page looked last week. 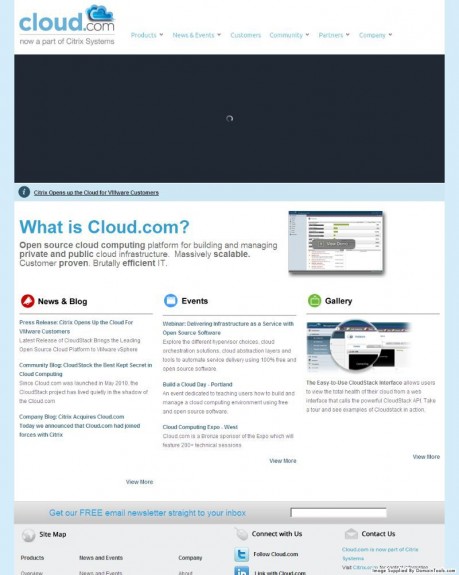 As you can see, it had links to different products, news and events, partners and customer case studies. As we noted when Citrix bought Cloud.com, some of the big names that had signed up to the platform included games giant Zynga and Tata.

Meanwhile, the Twitter account for Cloud.com, @CloudDotCom, has been inactive since April of this year. One of the spinoff products, CloudStack, has its own, active Twitter account and separate website, but that is also undergoing a change: as of yesterday, it started to redirect to an Apache Incubator page, part of Citrix’s move to donate the project to the Apache Software Foundation, also home to Hadoop. The old CloudStack site is now housed at Buildacloud.org.

As Citrix noted when it acquired Cloud.com, it touted how the Cloud.com product line was “not a traditional enterprise server virtualization platform with cloud management layered on top: It is a powerful, hypervisor-agnostic solution designed from the ground up to help providers build clouds the way the world’s largest and most successful public clouds are built – simple, automated, elastic, scalable and efficient. This proven approach has helped Cloud.com customers around the world roll out new cloud services up to 50 times faster, at one fifth the cost of alternative solutions.”

We have reached out to Citrix for comment and will update this post as we learn more.