This morning, Hulu announced a new section called “Hulu Kids,” which, as the name implies, organizes all the kid-friendly content in one easy-to-access section within Hulu’s video library. The section is available online directly at Hulu.com/kids, and it can also be found in the “Kids” section of the “Browse” menu. 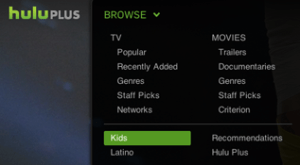 All the videos in Hulu Kids are commercial free, says the company, and here you’ll find content like “Thomas & Friends,” “Caillou,” and “SpongeBob SquarePants” from places like PBS, Lionsgate, and Viacom-owned Nickelodeon. Within the section, shows are further organized in other categories, like “Dino Time” for videos featuring “Barney” and “Dinosaur Train,” and “Cartoon Favorites” for shows like “Arthur” and “Teenage Mutant Ninja Turtles.” Shows can also be browsed in a grid format, which is more accessible for even younger viewers to manage, as they can select titles based on pictures instead of text. Yes, even kids who aren’t reading yet can probably manage it. (Don’t laugh, my toddler can operate Netflix for iPad better than I can, I think.) 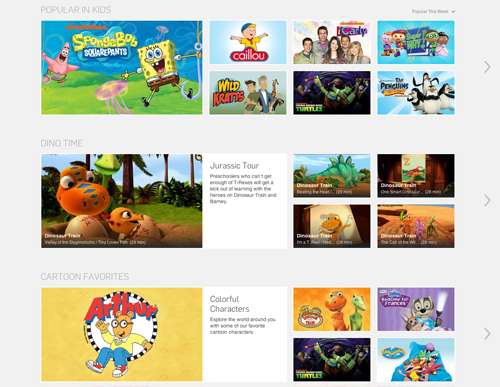 Hulu Kids is only available for Hulu Plus subscribers, however, the announcement states. The move follows Netflix’s recent expansion of its own kid-friendly service, “Just for Kids,” which arrived on the iPad this October. Previously, Netflix’s Just for Kids had been available on the web and on gaming devices like the Xbox 360 and Wii, offering a section of content designed for kids 12 and under.

In Hulu’s case, the Hulu Kids service is also kicking off with web support, as well as support for the PlayStation 3. And if you use a Blu-ray remote with the PS3, it will work with the Hulu app as well. Unfortunately, no mention of Hulu Kids in the iOS application was announced, but it’s sure to be in the works.