AOL (owner of TechCrunch) reported earlier today its quarterly earnings for Q3 2012 ending September 30. The results beat expectations with a flat revenue of $531.7 million compared to Q3 2011. It’s the first time in over seven years that revenue didn’t decline. Net income was $20.8 million compared to a net loss of $2.6 million in the same quarter last year. Diluted earnings per share were $0.22.

As the company beat expectations, shares (NYSE:AOL) have popped and closed at $43.70, 22.03 percent higher than yesterday. Consensus analyst estimate from S&P Capital IQ expected $522 million in revenue, around $10 million less than what the company reported.

When it comes to performance, traffic was up for all AOL properties, with 111 million unique visitors every month. It represented a 4 percent increase year-over-year but a decline of 1 million compared to Q2 2012.

Dial-up subscription revenue was down 10 percent year-over-year. Even though it was anticipated, it was the lowest rate of decline in six years. The company has successfully compensated for the revenue loss with advertising revenue.

“We just reported the best relative revenue performance in seven years and the second consecutive quarter of year- over-year profit growth, exceeding our expectations,” AOL CEO Tim Armstrong commented in a statement. “We have positioned AOL for growth in 2013,” he continued.

During the earnings call and in an interview with Reuters, Armstrong confirmed that the main focus is now advertising and video. In other words, after investing in building or acquiring strong content brands, the company is now focused on bringing more revenue.

AOL shares are up 130.1 percent over a 12-month period, which is nothing short of astonishing. Comparatively, over the same period, Apple shares are up 46.7 percent, Google shares 14.6 percent. 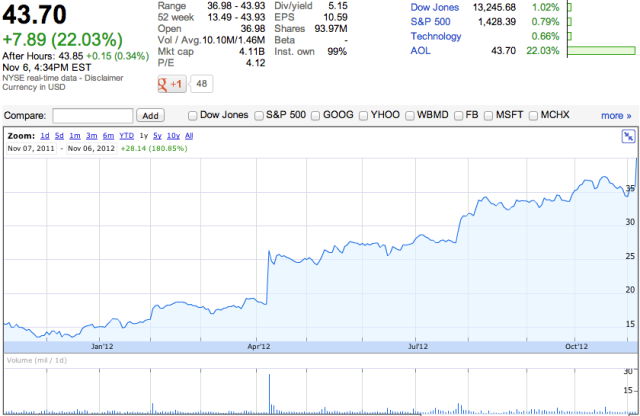