Apple’s lead in the tablet market took its first serious dent in Q3, according to estimates from analyst IDC, based on tablet shipments (rather than sales). Apple’s dominant share of the market shrunk in the third quarter of this year, dropping from 59.7 percent in the year ago period (and 65.5 percent in the second quarter of this year) to 50.4 percent in Q3 this year, while Samsung and Amazon both grew their share: Samsung took close to a fifth (18.4 percent) of the market in Q3, up from 6.5 percent in the year ago period, while Amazon grew from nothing last year to almost a tenth (9 percent) in Q3, following the launch of its original 7-inch Kindle Fire and 7-inch and 8.9-inch Kindle Fire HD tablets. 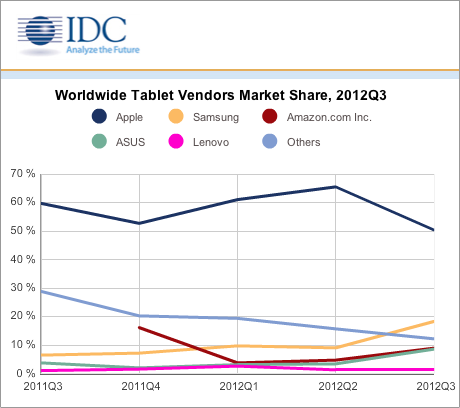 IDC also calculates that Asus — which makes Google’s Nexus 7 tablet , and recently reported a monthly sales rate for the Google-branded slate of close to one million—  also grew its share over the period, rising from 3.8 percent a year ago to 8.6 percent in Q3 this year.

However the analyst believes slow growth for Apple in tablets for the quarter can be partially explained by rumours of the iPad mini causing potential buyers to stall their purchases. “After a very strong second quarter, Apple saw growth slow as both consumer and commercial (including education) shipments declined, and rumors of a forthcoming iPad mini began to heat up,” noted Tom Mainelli, research director, Tablets at IDC in a statement. “We believe a sizeable percentage of consumers interested in buying an Apple tablet sat out the third quarter in anticipation of an announcement about the new iPad mini.”

The analyst expects Apple’s performance to improve in Q4 — although it notes that the iPad mini’s relatively high price-tag still leaves room for Android OEMs to grow their share further. “Now that the new mini, and a fourth-generation full-sized iPad, are both shipping we expect Apple to have a very good quarter. However, we believe the mini’s relatively high $329 starting price leaves plenty of room for Android vendors to build upon the success they achieved in the third quarter,” added Mainelli.

With the launch of Microsoft’s Windows 8-based Surface tablet, it’s not just Android that Apple has to worry about in tablets — albeit Microsoft is not currently competing at the lower end where some Android OEMs are carving out a niche. “Competitors are turning up the pressure on market leader Apple,” noted Ryan Reith, program manager, IDC’s Mobile Device Trackers, in a statement. “With the recent introduction of a number of Windows 8 and Windows RT tablets, consumers now have a third viable tablet platform from which to choose. However, price points are critical in tablets, and Microsoft and its partners will have a tough time winning a share of consumer wallet with price points starting at $500.”

“Samsung took advantage of an opportunity in the second quarter,” he added.  “The company offers a wide range of tablet offerings across multiple screen sizes and colors, and that clearly resonated with more buyers this quarter. Its growth to 18.4 percent of worldwide market share during the quarter represents the first time a competitor has attained this level of share since the original launch of the iPad.”