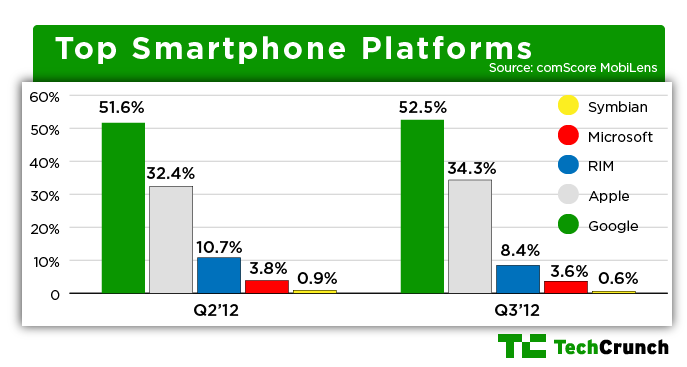 Digital metrics firm comScore today released its most recent mobile market share report, detailing trends in the mobile industry for the three month period ending in September. The survey of over 30,000 mobile subscribers in the U.S. revealed that smartphone penetration topped 50 percent for the first time ever in the study’s history, with Android and Samsung leading the charge.

Smartphones were used by 51 percent of those surveyed, up 8 percent since the June quarter. Android was the top smartphone platform during the period, nabbing 52.5 percent of the overall market. That was up 0.9 percentage points from the quarter ending in June. Apple’s iOS also gained, going up 1.9 points between the two measurement periods, from 32.4 percent to 34.3 percent. RIM was the big loser, dropping 2.3 percentage points from 10.7 to 8.4 percent of the mobile OS market. Both Microsoft and Symbian also saw slight decreases in share during the period.

For device manufacturers, Samsung led, with a strong 26 percent share of both smartphone and non-smartphone mobile subscribers using Samsung phones. LG came in second, but is on the verge of losing that position to Apple, which is impressive given that Apple only markets smartphones, while both Samsung and LG provide a mix of both smart- and feature phone devices. Samsung experienced small gains during the quarter (up 0.4 percentage points), while LG dropped from 18.8 to 17.7 percentage of the overall share. Apple was the big winner, climbing 2.1 points to 17.5 percent share.

Not surprisingly, the steady growth of smartphones continues to have effects on the ways people use their devices. Downloading apps, browsing the web and accessing social networks or blogs all rose appreciably during the quarter, indicating that people are not only adopting more smartphones, but making good use of their additional capabilities, too.

If trends continue, and Apple’s iPhone 5 sales remain strong (as they likely will), next time around we could see the company outpace LG and become the second biggest mobile phone OEM in the U.S., and then the battle between it and Samsung will become the race to watch as smartphone penetration grows.