Facebook Gifts launched with the ability for you to buy something meaningful for a friend or family member on the social network. I’ve tinkered with it a bit and have bought a few gifts, including a bonsai tree and Starbucks gift cards. My mind immediately jumped to “wouldn’t it be cool if I could donate money to a charity on behalf of my friend for their birthday?”, and well, that happened today in a test capacity.

If you have access to Gifts, you will now be able to choose from eleven non-profit launch partners who can benefit from a donation made on behalf of one of your friends. Do it for their birthday, their engagement, wedding or just because. It’s a genius idea, and one that really leverages Facebook’s over 1 billion users. This is yet another feature that shows the power of Facebook, similar to the Organ Donor program. During the test program, your donation will be limited to $25, but that may change over time if this is successful, I’m told.

Here’s what the company had to say about the launch:

We’re excited to announce that we are launching a new test feature on Facebook Gifts: now you can now use Facebook to make a charitable contribution in celebration of a friend or a family member.

We are especially pleased to be launching this test now – when so many people are looking for new ways to help the victims of Hurricane Sandy, or assist those most in need around the holidays.

With each charitable contribution on Facebook, you can choose which nonprofit you would like to support. Or if you don’t know which organization to choose, you can let your friend make the choice.

Here are the eleven non-profits that you can choose from when giving a gift, including the American Red Cross, which is now focusing on helping those affected by the horrific Hurricane Sandy aftermath on the East Coast:

Don’t know which one to pick? Let your friends or family do the choosing.

The Facebook Gifts product hasn’t rolled out to everyone just yet, but if you have it and give a gift to someone, they immediately get access to the features. The company tells me that it plans on rolling it out to more users proactively, as well.

When you go to send someone a gift, you’ll now see the “pay it forward” area that includes the eleven non-profits: 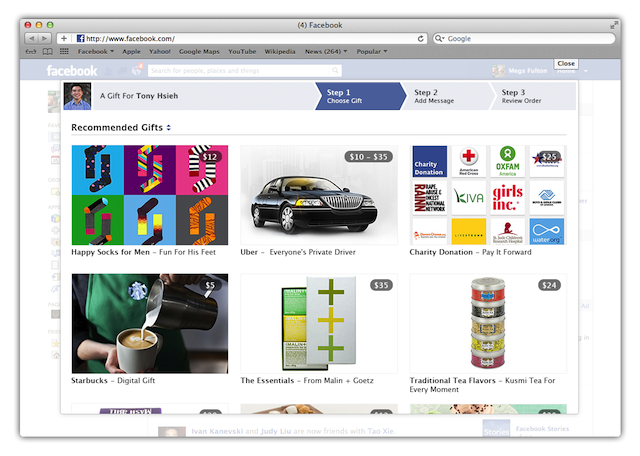 Go ahead and choose your charity of choice: 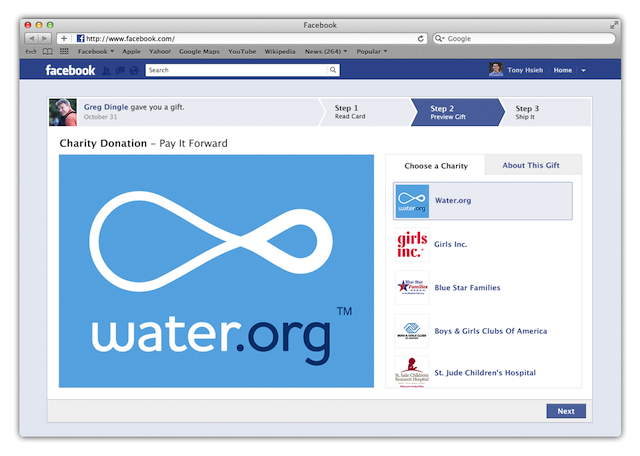 Then the best part about it is the charitable gift then shows up on your Timeline and your friend’s as well. It’ll then get pushed to the News Feed for maximum exposure, which is wonderful for the benefitting non-profits: 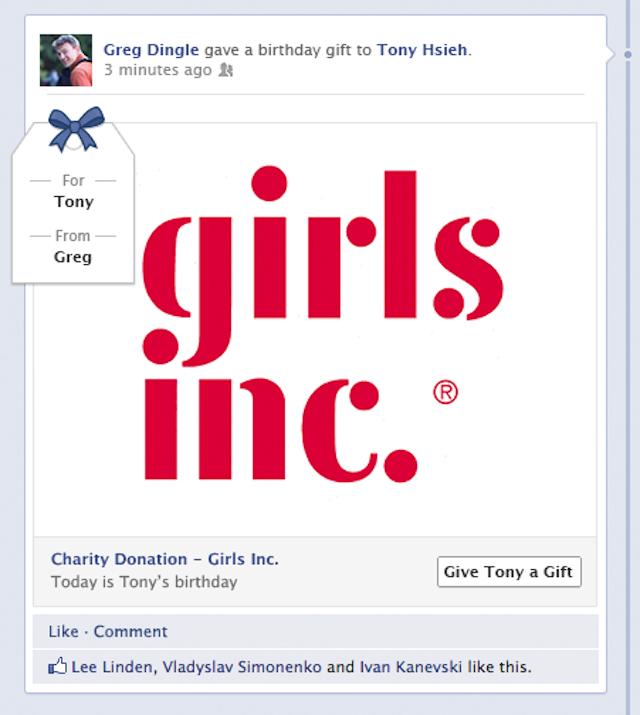 Here’s a special tip, if someone has given you a gift of any type using Facebook Gifts, you can “return it” before it ships or you use it, and then apply it to a charitable cause if you like. That’s really neat, because the sender won’t be offended at all by your decision.

Jared Morgenstern, the person who spearheaded this initiative at Facebook, told me about how this came about:

We believe that adding charitable giving to the Facebook Gifts platform will make it easier for people on Facebook to discover and connect with nonprofits that are doing important work around the world. In addition to aiding in the aftermath of the hurricane, we believe that making it easier for people using Facebook to give a charitable donation through Facebook Gifts will introduce many Facebook users to exciting and worthy nonprofit organizations they may not have discovered otherwise.

Like I mentioned, this is a great use of the Gifts product, which is an evolution of Facebook’s Karma acquisition. By allowing people to use the service in a way that benefits others, the gifts mean “more.”

I work with the cancer-fighting organization LIVESTRONG and reached out to its CEO, Doug Ulman. Clearly, he’s very happy to be involved in the launch and he told me:

We are very excited to be partnering with Facebook in this manner to allow users to make a donation to fight cancer (or other important causes) in honor of their friend’s birthdays.

The Facebook platform can create true social change through this new initiative and we are honored to be a partner in the effort.