Crowdfunding site Kickstarter has kicked off the launch of U.K.-based projects today. As reported earlier this month, the move marks the first time Kickstarter projects will be able to be built around bank accounts located outside of the U.S. — making it easier for U.K.-based users to list and fund their projects as they can now enter payment info directly on Kickstarter, rather than via Amazon Payments.

Kickstarter is also eyeing other international launches, according to the BBC. Head of community, Yancey Strickler, told the news organisation he plans to expand the site to other countries soon. “The request to expand internationally has long been one of our most requested features,” he said. “We certainly are interested. We’re going to see how the UK launch goes and figure out the next moves from there. There’s a lot of places that will be interesting.”

Kickstarter has been letting U.K.-based users start building their projects since October 10 but from today these projects can now be launched and shared with prospective backers.

There is no U.K.-specific Kickstarter site — projects are listed alongside U.S.-based projects on Kickstarter.com, so from a site users’ point of view, the change is quite a subtle one. You have to look out for a £ symbol (rather than a $ symbol) in the funding information to determine whether a project is U.K.-based or not.

All UK projects will be listed in pounds sterling. If you are pledging from outside the UK, you will see the approximate conversion rate to US dollars before you complete your pledge. 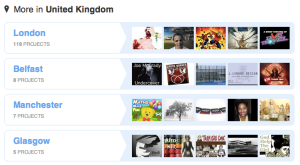