Chasing a massive payday, lawyers flocked to a man who claimed to have evidence that he owned half of Facebook. But after Paul Ceglia’s arrest for forging that evidence this week, his lawyer Dean Boland has wised up that that payday is never gonna come. Boland has now requested the court’s permission to cease representing the con artist.

Greed is a powerful thing. With even a slight chance that Ceglia could be awarded tens of billions of dollars, it’s understandable why law firms would want to represent him and take a cut. The $60 million settlement awarded to the Winklevii likely bolstered hopes that Zuck had made some other wrong moves in the company’s infancy.

As the facts emerge, though, representing Ceglia in his lawsuit against Mark Zuckerberg has become a serious liability with the potential to stain a law firm’s reputation.

Documents produced by the New York man over the last two years that show him and Mark Zuckerberg striking a deal to split ownership of Facebook are now widely believed to be false. That, his criminal past, and other sketchy details led Ceglia’s last seven lawyers to ditch him. Here’s the timeline of lawyers jumping ship:

Then on Friday October 26th, authorities finally concluded that Ceglia’s 2-page email contract with Zuck that gave him half of the social network was a fake. Scans of Ceglia’s hard drive showed he had falsified records that backed up his claim, and Harvard’s email servers showed no evidence that the contract ever existed or was sent.

Ceglia has been charged with one count of wire fraud and one charge of mail fraud, which each carry up to a 20-year prison sentence. His lawyer Boland saw the case falling apart, and so today submitted a motion for withdrawal of representation of Ceglia. Boland insists he never encountered evidence that Ceglia was lying, but still wants out.

With any luck, a trial will begin soon, Ceglia will be found guilty, he’ll be thrown in jail, and we won’t have to talk about this bozo any more. And let this be a lesson to other crooks. If you try to defraud the most powerful Internet companies and smartest technologists in the world with some cheap electronic forgeries, you’re gonna have a bad time. 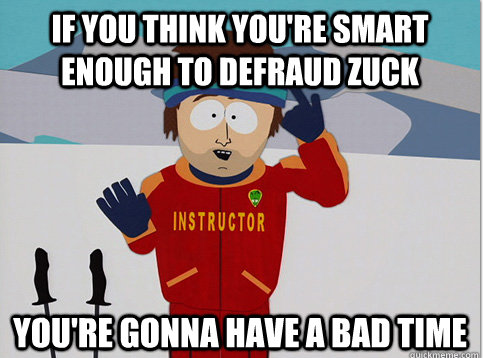 Here’s the full memorandum Boland filed with the court today: