Bonfires in the street, people dancing on cars, body-armored cops, and…tablet computers? Last night was not your typical riot. Only one thing distracted people from the celebratory carnage caused by the San Francisco Giants winning the World Series. It wasn’t the fear of arrest or bodily harm. It was the desire to document and share the beauty of the chaos with mobile devices. And here’s what it looked like. 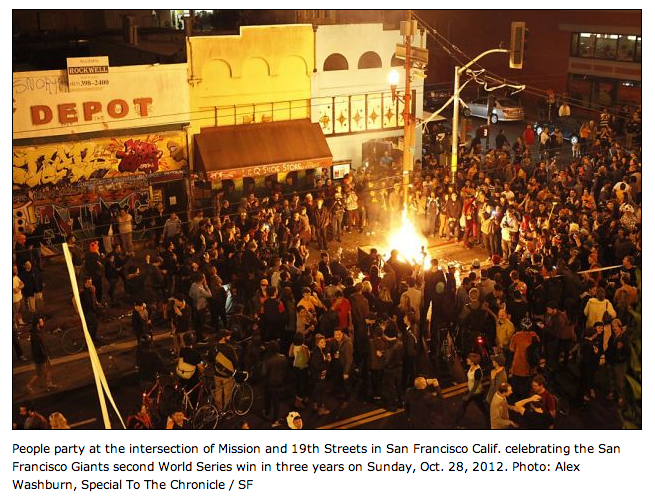 The bars of San Francisco erupted at at 8:50pm when the Giants struck out the final Detroit Tigers batter to sweep the World Series. Thousands poured into the streets in districts across the city, setting mattresses ablaze alongside couches and cardboard boxes. But amongst the wild instigators was another demographic: well-to-do twenty-somethings carefully lining up camera phone photos of their friends beside the bonfires and police.

One minute someone would be jumping and cheering — a true participant in the riots. The next, they’d stand motionless, applying filters and adding tags to shots before sending them off to Facebook, Twitter, and Instagram. In one of the weirdest scenes of the night, I saw guy surrounded by a swirling crowd wield a full-sized iPad to take a photo of his girlfriend in front of a dumpster fire. 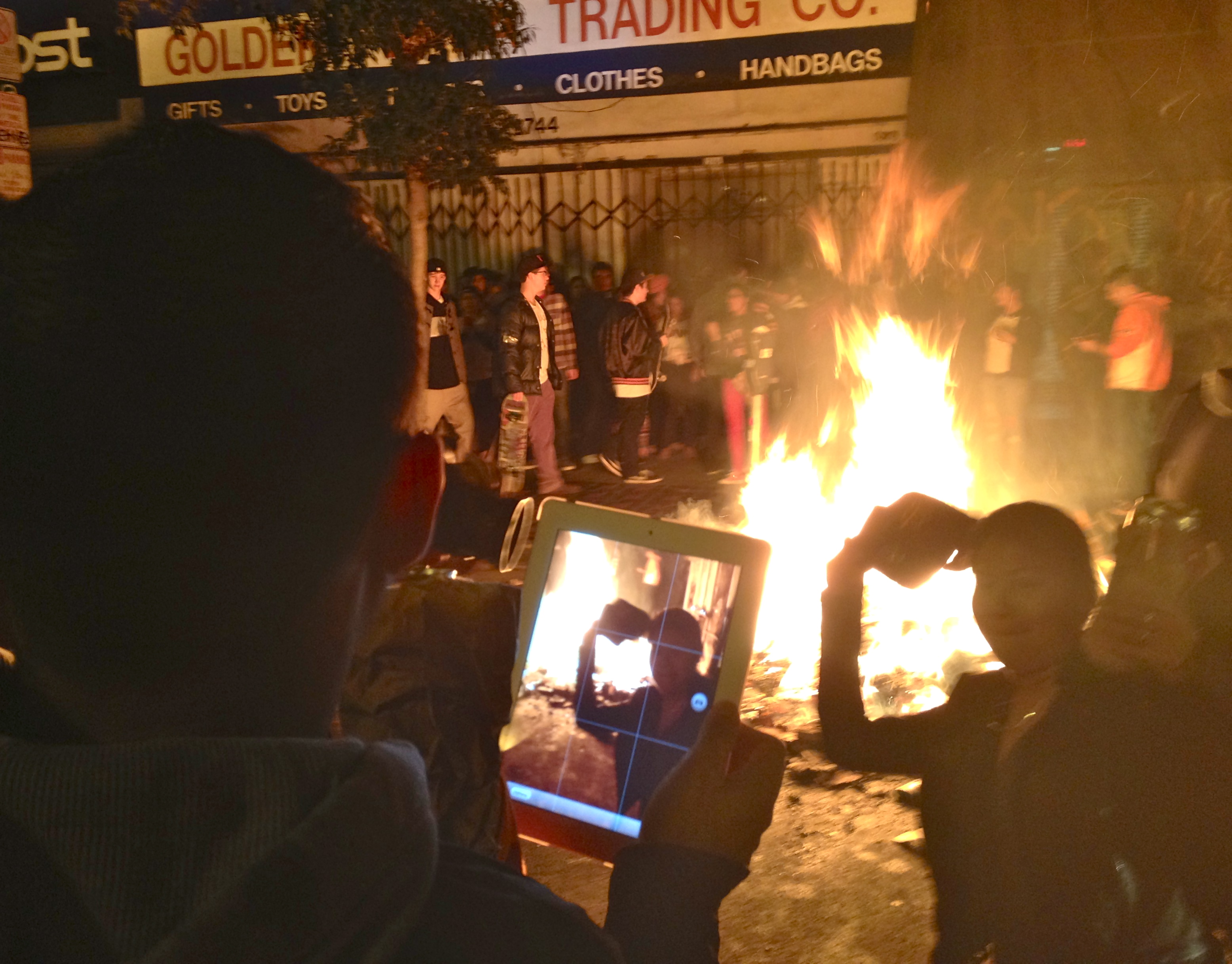 They just couldn’t remain in the moment. While action roared all around them, their eyes were not enough to capture the scenes. Social networks have become just too alluring. In our quest for Likes, retweets, epic profile pics and fifteen seconds of fame, we can completely tune out where we are, even if we’re literally in the middle of a riot. 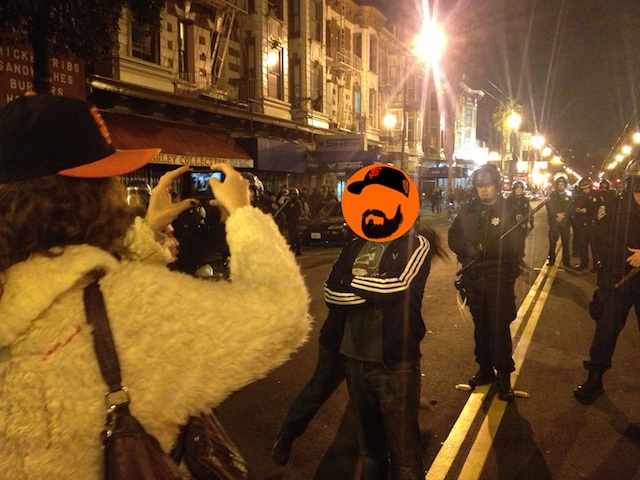 There was one point when people pocketed their phones. Several peaceful revelers were enjoying a riot cop photo op in front of the assembled line of officers when some drunks started pelting police with bottles. The billy club-wielding cops suddenly charged the crowd and we had to full-sprint to escape.

Those who used the anonymity of the chaos to commit serious crimes should be ashamed. There were some gunshots and graffiti taggers. Worst might have been those who crossed the line from cardboard blazes in the street to actually setting property and vehicles on fire.

But those who rioted respectfully shouldn’t be lumped in with them. There were plenty of people just there to take photos, dance to pop-up marching bands, watch ad-hoc fireworks shows, and have sing-a-longs to “Don’t Stop Believin'” like this guy. 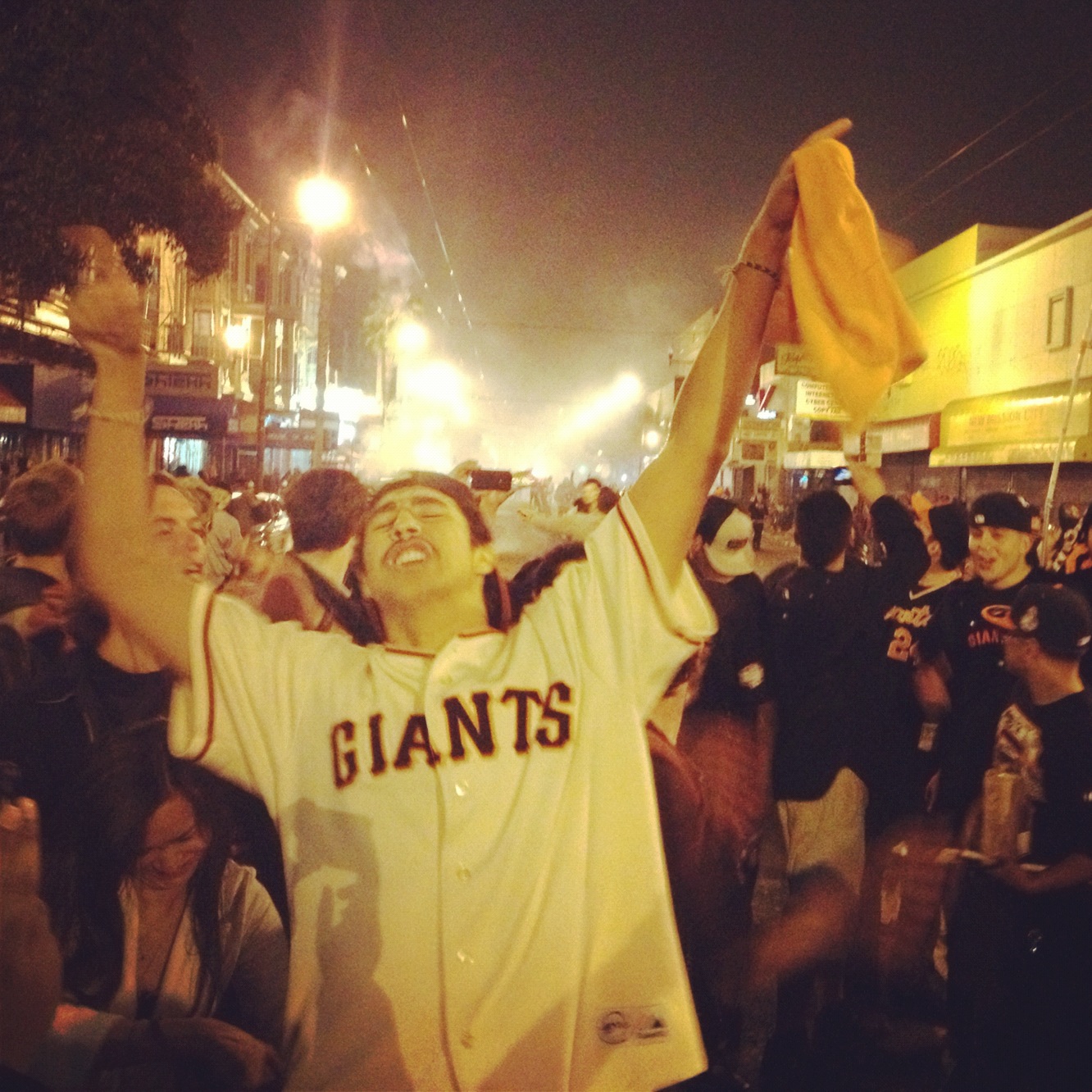 In general, the police and fire departments did a solid job of protecting the city and citizens while allowing us all to have a little fun.

And that little fun will live on. Our newfound instinct to unsheathe our smartphones might steal us away from being here now. But at least they save some stunning content so others can experience these momements vicariously. Just watch this collage of #SFGiantsRiot video set to the soothing sounds of Al Green.

[Featured image via ThePersk. Thanks to Sucka Free City  via Uptown Almanac for the video. I’m the guy in the orange hat at 0:56.]

And here’s a few more of my shots for added color:

Riot police line up at 24th and Mission. Minutes later they charged the crowds at 22nd and 19th streets, sending thousands of fans running for their safety. 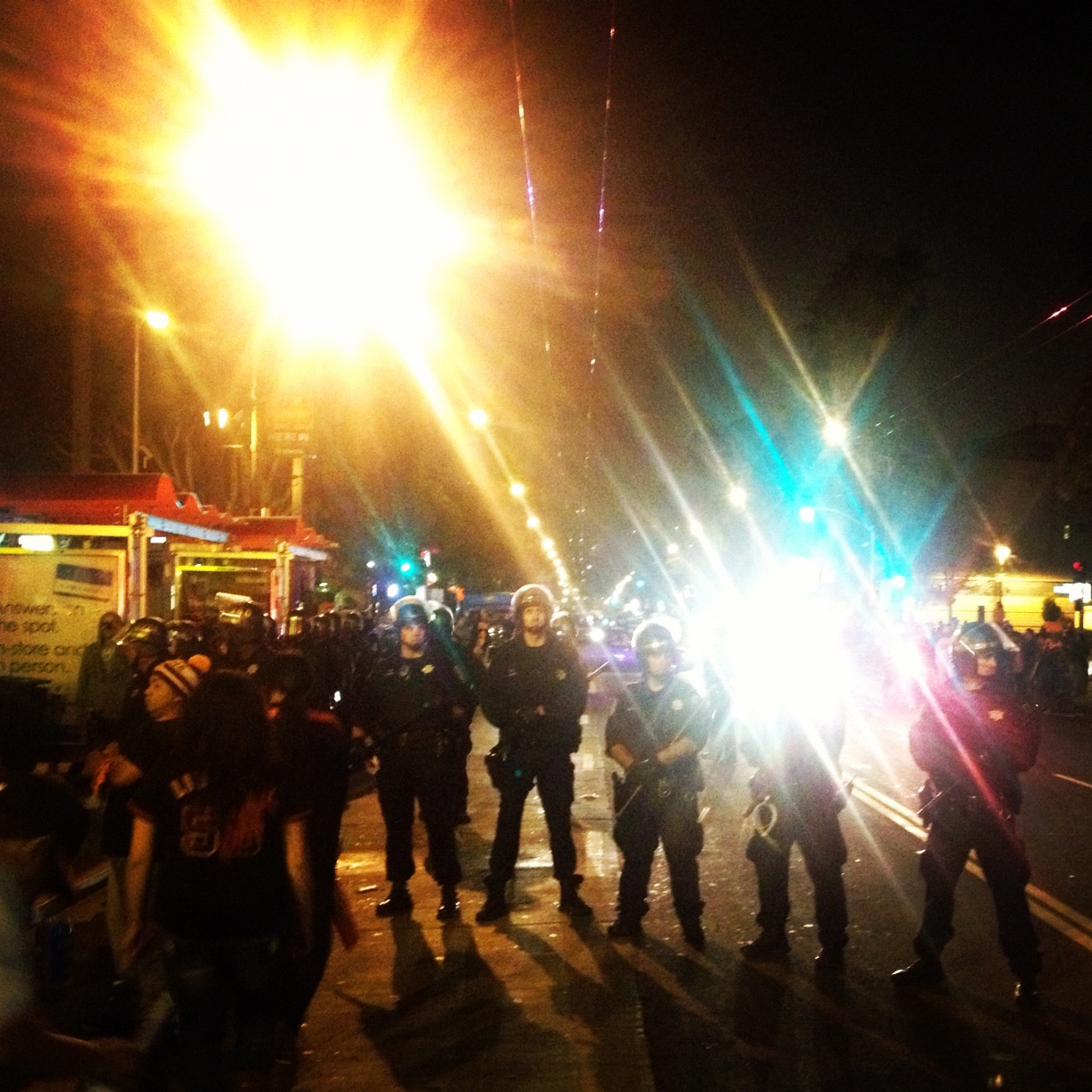 Mattresses and cardboard burn in a giant blaze at 19th and Mission. 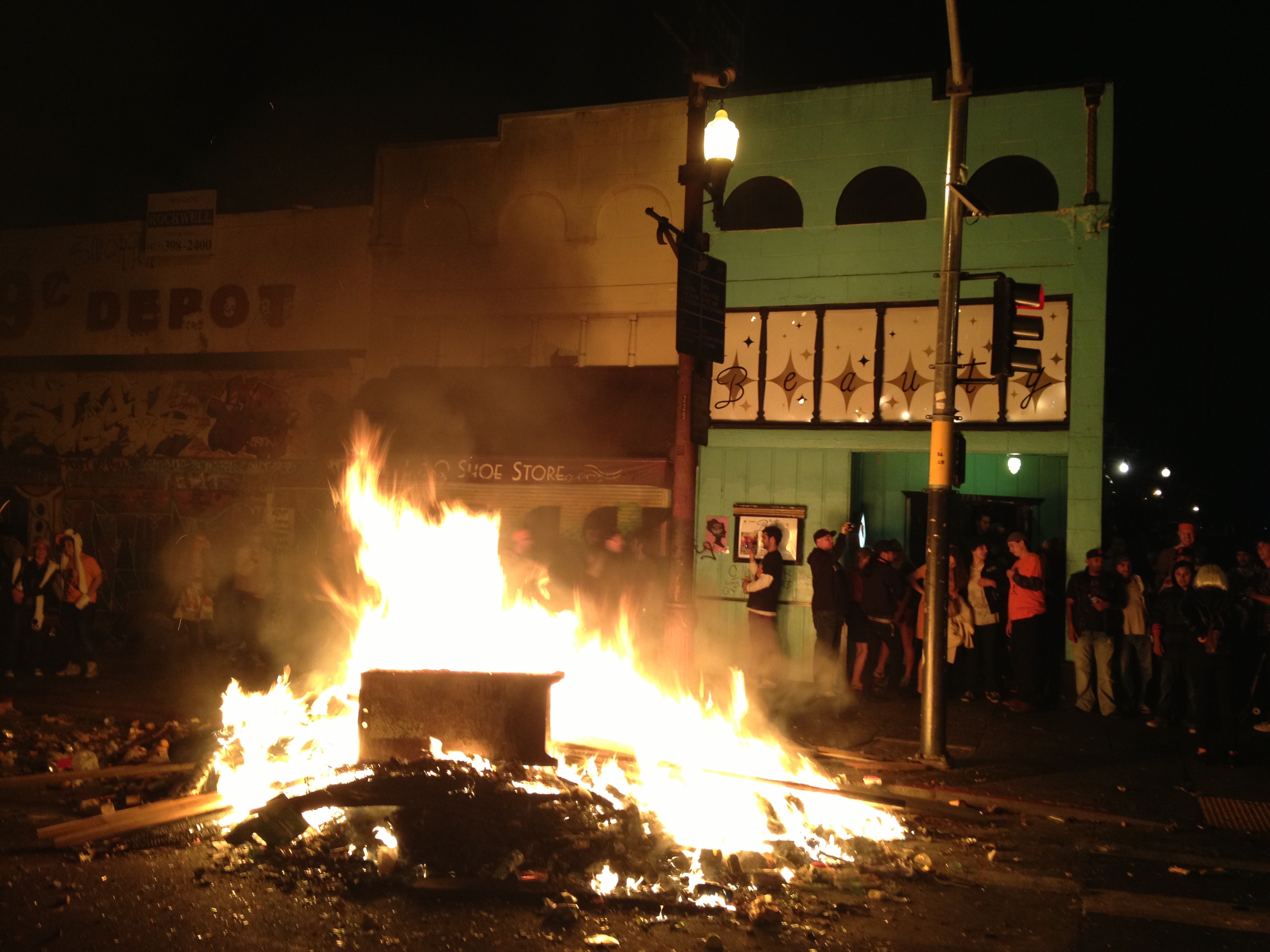 By the morning, that same fire at 19th proved to have done little damage other than leaving some soot on the street and fumes in the air. For the joy it brought, that seems like a small price to pay. 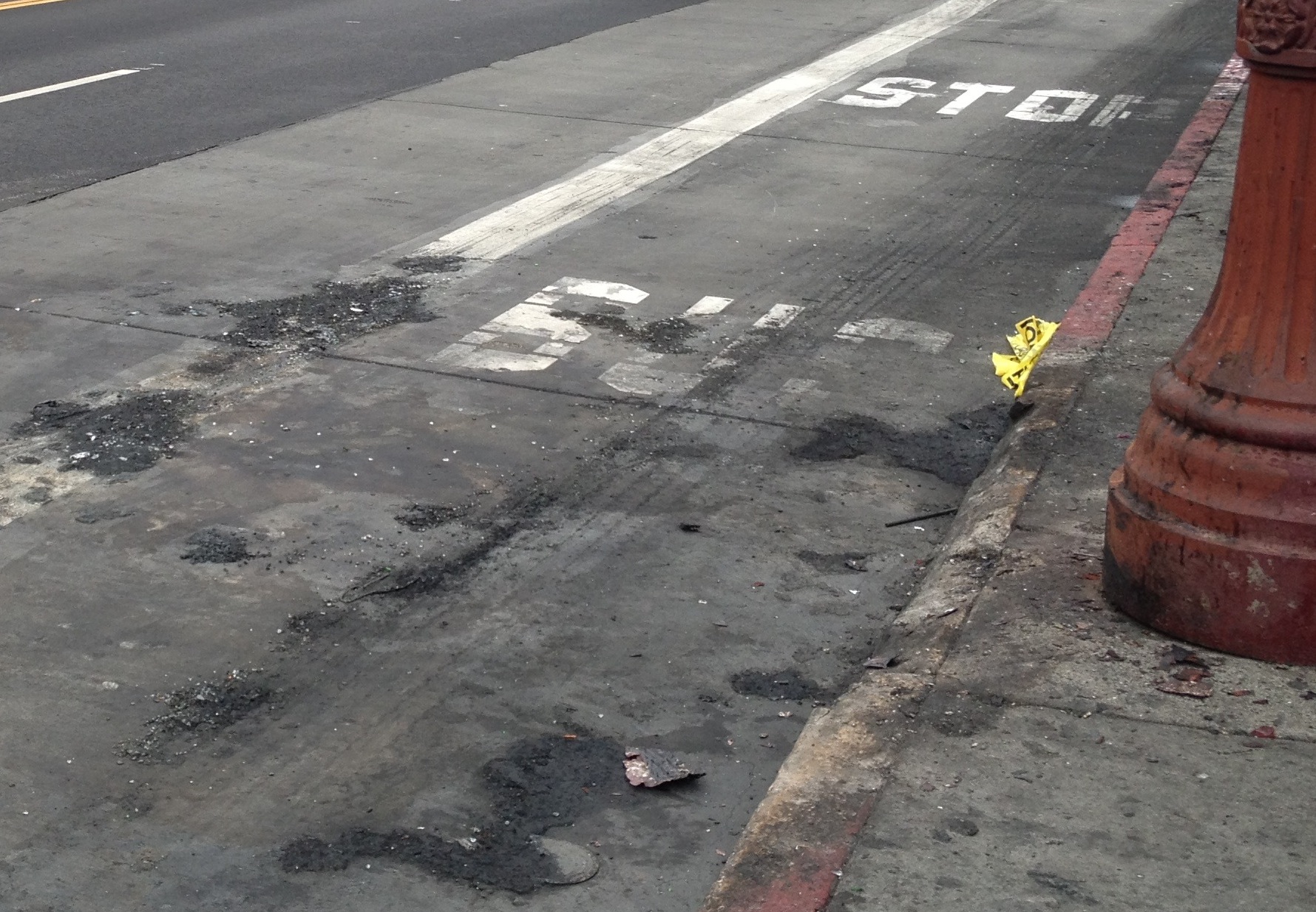 A brass band wails as smoke pours out of a dumpster fire at 24th & Mission. 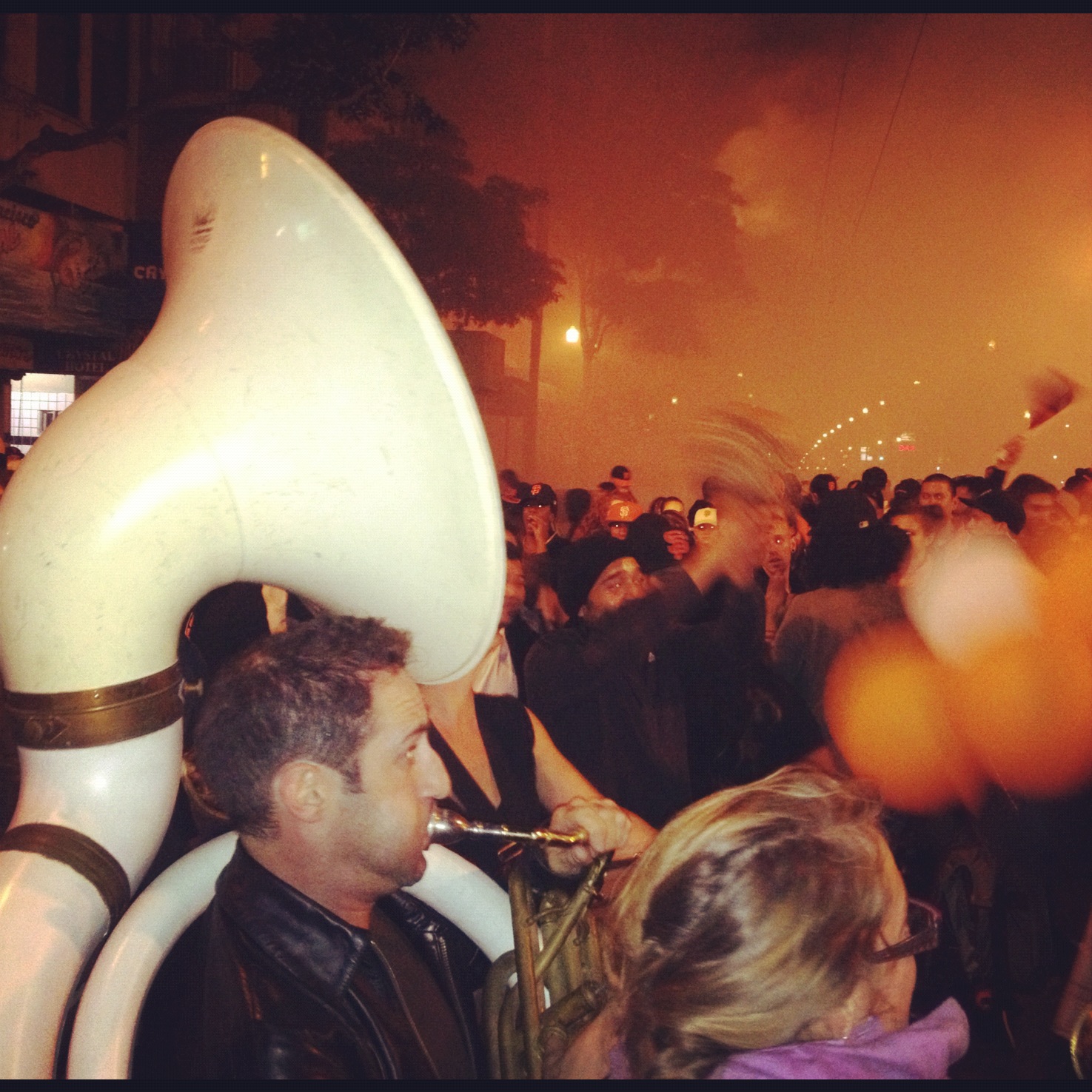 An ‘unidentified’ Giants fan cheers on the bonfire crowd from atop a light post at 19th & Mission. 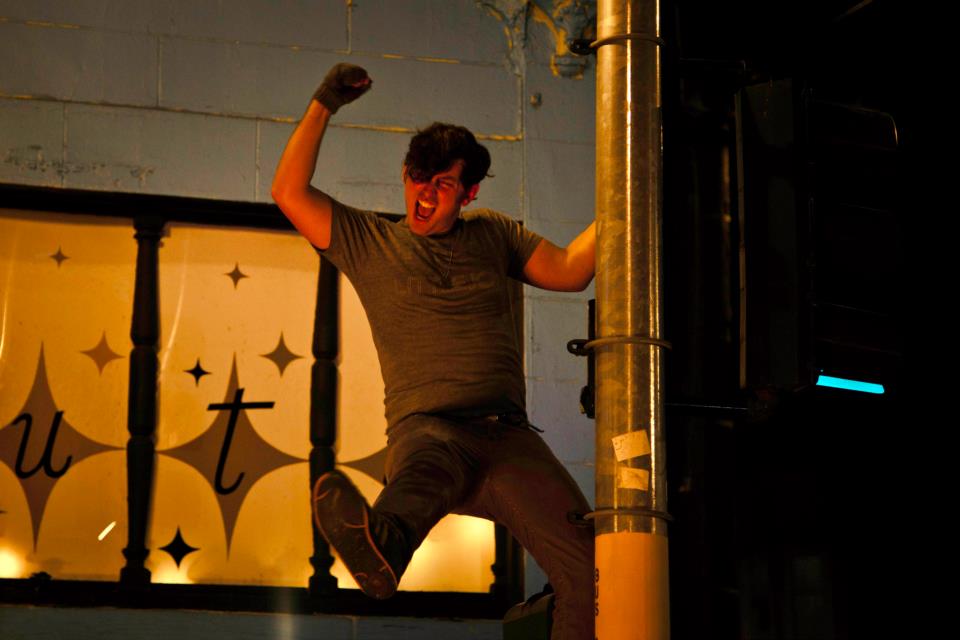